9 Best Tactical Pens for Self Defense and Survival

For self defense and survival, it pays to think outside of the box.  Instead of relying solely on weapons like firearms and pepper spray, you should consider carrying a tactical pen.

What Is a Tactical Pen?

A tactical pen is a pen made out of a strong material (usually aluminum or steel).  The pen will also have a hardened point that can be used for hitting/striking an assailant.  Some are hard enough to break through glass.

A good tactical pen will also have a flat back end.  This allows you to hold it in a reverse grip so you get more power when striking.

A tactical pen looks and works a lot like a Kubaton, which is the brand name for a mini stick used for self defense.

Some of the reasons I love tactical pens are:

For me, the biggest benefit is that you will actually carry it with you.  Since it is useful (you can write with it) and compact, it isn’t annoying to carry and you’re less likely to forget it.

After all, a weapon is only valuable for self-defense if you have it with you!

The main use is for self-defense.  They can be used to strike or slash an assailant in an attack situation.

Some pens (usually with carbide tips) can break through glass, drywall, or other objects.  This could save your life during situations like a car accident if you were to get stuck in the vehicle.

In a self-defense situation, you’ve got to be prepared to use anything at your disposal.  This might include something like your keys, teeth, fingernails, purse, nearby rocks… Since a good tactical pen won’t break, it is more reliable than “whatever is lying around.”

There are a lot of techniques for using tactical pens. Before you study these, I’d recommend brushing up on  your general self-defense skills.  The biggest part of self-defense isn’t memorizing a bunch of techniques, but rather reacting quickly and smartly to possible threats.

The videos below show you some ways to use the pens.

Here’s an overview of what you need to know to use one effectively:

It takes a lot of practice to remain calm enough during an attack to hit a deliberate part of the body.   Realistically, you will be using your weapon to strike anywhere you can.

But, if you do have the time/ability to hit a specific target, aim for these attack points. 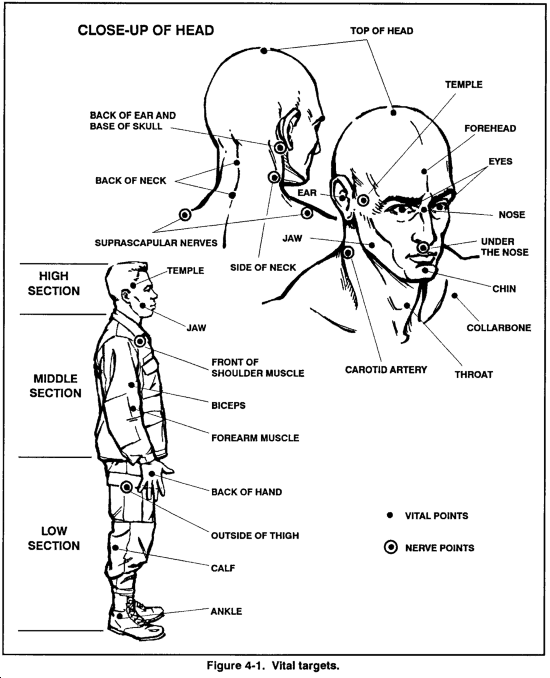 Tactical pens are NOT allowed on airplanes in your hand luggage.  At the TSA blog, you can find stories of them being confiscated – such as here.

Does that mean you can’t sneak one through airport security?

You could certainly try! Although it is not something I would recommend or condone.

Many look so much like normal pens that security agents don’t notice them.

*Tactical pens ARE allowed in your checked luggage though.

For an affordable option, the Atomic Bear is really well made.  It is made from aluminum and has a tungsten tip which can break through glass.

When the pen is capped, the striking tip is exposed.  When you want to write with the pen, you switch the cap to the other side.  The pen actually writes well too.

The only things I don’t like about this tactical pen is that is a bit heavy.  It also resembles a tactical pen so you will have a hard time getting it through security.

Gerber makes a lot of great self-defense and survival items.  If you are willing to pay a bit more for a sturdy option, the Impromptu is a good choice.

The pen has some bulk to it because it is made from steel.  Unlike most pens which have the striking tip on the opposite side of the writing tip, the Impromptu has them next to each other.  This means that you don’t have to worry about losing the cap.

Unfortunately, the clip on the pen isn’t very reliable.  Some people report that it broke.  Luckily Gerber customer service is great and they will send you a new pen if the clip breaks.  The clip could be tighter though, so I’d be careful not to lose it.

As you’d expect from Smith & Wesson, this is a great self-defense weapon.  They’ve chosen aircraft-quality aluminum so it is very strong without being too heavy.

Check Prices on Amazon
Considering the quality, this is a very affordable option.

I personally like that there is a screw cap. It is less likely to get lost than a push cap and won’t rattle.  Though it can be annoying to constantly screw the cap back on if you use it a lot.

I also like how it feels in my hands.  However, some people complain that it is too thin, and thus hard to write with.  If you prefer pens with textured grip, then this also isn’t the best tactical pen for you.

Of all the pens reviewed here, this one is the most discreet looking.  You could probably get it through airport security easily (though I’m not making any promises nor recommending that you try!).

Compared to other tactical pens, the CRKT Williams also has a very pointed tip.  This makes it great for stabbing (as opposed to bruising).

No product is perfect though.  A lot of people report issues with the O ring on the top part of the pen. It can come off and be annoying to put back on.

There are literally hundreds of these weapons on the market at the moment, here are some more for your perusal.

Nice gray anodized body and comes with the all important glass breaking tip. Its fairly discreet and writes pretty well too.

This one has a unique look which makes it stand out from the usual models. With a tungsten steel tip it will cause severe damage to any attacker.

It also comes with a Fisher Space pen cartridge which allows it to write in the rain!
Check On BladeHQ

This pen is pretty darn expensive! It is however beautifully machined with a shimmering anodized finish. A glassbreaker tip and stainless pen clip complete the package.

This cheap option looks reasonably stylish but you will be making a compromise on quality. Has only average writing quality and doesn’t have a glass breaking spike.

Basic budget self defense pen. Actually gets some pretty good reviews and well worth considering if you are on a budget.
Check On Amazon

Very nice looking bolt action pen. This is a step up from the budget models and it shows in the polished titanium finish. With tungsten tip for maximum wrecking power.
Check On Amazon