When I first arrived in Peru, I was shocked by the huge, gray barren cliffs cutting the capital city of Lima into chunks.  Flying to the north a few days later, I was equally shocked by the dense jungle with its loud rivers and insects screaming into the dusk, and the snakes which boldly jump from tree branch to tree branch.

My shock was only going to get worse.  A month later, I traveled overland through the jungles to the tops of the Andes Mountains.  Once again, it was like entering a whole new world, complete with mountain roads so steep you don’t even bother putting on a seat belt: If you go over these cliffs, you’re dead.

What perhaps shocked me most on this entire adventure is that fact that people have been living her in Peru since before my country was even formed.  Even more impressive, the Inca not only managed to traverse these large swaths of varying land, but they conquered them all!

How did the Inca manage to survive in (let alone conquer!) the desert, jungle, and high mountaintops?  Despite our tendency to think of the Inca and other native groups as “primitive,” they actually had a lot of advanced technology – and we could still learn a lot from them today.  Here are just some of the amazing survival skills that the Incas used.

1. They Were Architectural Geniuses

The fact that Incan architecture still exists today is testament to how well their structures were made.  Rock was typically used for the walls and cut so precisely that no mortar had to be used.  Maccu Piccu is the most famous example of this Incan architecture.

But even their ordinary structures were remarkably well made.  They utilized whatever materials were around, such as mud + straw for making bricks for their homes.  Roofs in the jungle were (and still are) made from thatched palm trees whereas dried grasses are used in the mountains.

Survival Takeaway: Learn how to make a long-term survival shelter.

2.  They Terraced the Mountains

How did the Inca manage to grow crops on the incredibly steep mountains of the Andes, sometimes at 17,000 feet above sea level?  Rather than try to plant crops on those sheer cliffs, they built terraces into the mountainsides.

Not only did the terraces level the area for drops, but they had other benefits.  The stone retaining walls would get warm during the day.  When temperatures dropped at night (it gets cold!), the stones would release the heat into the soil, which in turn would help plant roots stay warm and extended the growing season.

The rocks also absorbed water and saved crops which would have been destroyed by drought.  According to one archaeologist, they’ve excavated terraces 6 months after irrigation and they are still damp inside.  (Source 1)

Survival Takeaway: Change your environment to make it suit your needs.

3. They Controlled the Water

In addition to terracing the mountains, the Incan built amazing irrigation canals and cisterns.  They used rocks of various heights, widths, and angles to ensure that the water was retained and drained in the best possible way.  They even used under-floor drainage canals to make sure their storage areas (aka root cellars) were of the proper humidity.  Thanks to these canals, their crops could be stored for 2+ years. (Source 1, 2)

Survival Takeaway: Water is key to life.  Learn how to harvest and store it.

4. There Was No Money

One of the amazing survival secrets of the Inca was that they had no money.  Instead, they utilized a system of trade.  There weren’t even any taxes in their empire.  Instead, the subjects paid their taxes in the form of work.  The subjects were expected to work on the roads, crops, canals, etc.  In exchange, the rulers would give the subjects food and clothing.  Thus, nothing was ever bought or sold in the Incan Empire. (Source)

Survival Takeaway: Learn a valuable trade.  This will be more valuable to you when SHTF than money.

This may not seem like a survival secret, but it is actually what helped the Inca Empire thrive.  The rulers expected their subjects to work very hard and there was little time for enjoyment – and thus little time to plan revolts.

But the rulers did invite everyone to come to the long ceremonies and festivals that the empire organized.  There was plenty of drinking and partying that went on.  Experts think that these festivals are the glue that held the empire together.

Survival Takeaway: All work and no play will kill the soul.

6. They Had Strong Communities

In the Incan time, people were organized into ayllus – groups of extended families who lived near each other in small villages or settlements. These ayllus shared their land, animals, and goods.  As the saying goes, we have strength in numbers.

Survival Takeaway: Get to know your neighbors and start building a community. 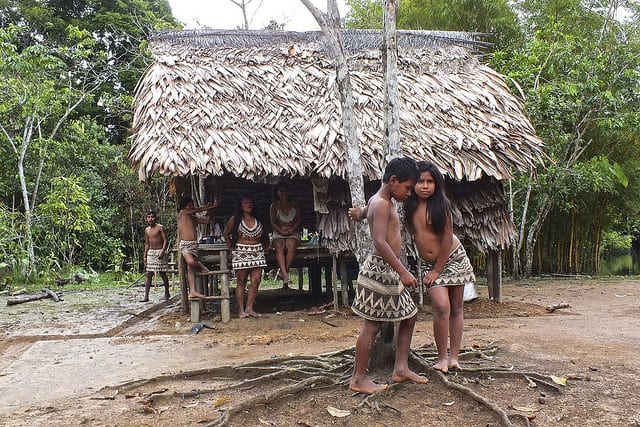 The beef meat I ate while in Peru was really tough and chewy.  After seeing their cows on the mountainous cliffs and wandering through the jungle, I understood why.  The cows were all terribly thin and bony.

Let’s face it: raising large animals is tough.  It often does make sense to waste all of your scarce cropland to grow food for your livestock.  Plus, the amount of effort doesn’t pay off for the amount of meat you get at the end. (Read What Food You’ll Really Be Eating for Survival)

The Inca knew this and had a better system.  They didn’t eat much meat but, when they did, it was mostly guinea pig or duck meat.   Guinea pigs were easily raised in small chambers within their houses.

Survival Takeaway:  Stop chasing the big game when an easier meal is available.

The Inca were so meticulous about how they built and made things that it could take many months just to make a single wall.  Was it worth it?  Consider that many of those walls are still here after 500 years of earthquakes and I’d say yes! (Source)

Survival Takeaway: Do it right or do it twice.

9. They Knew their Local Plants

One of the things that amazes me most about ancient cultures is how many ways they figured out to use the plants around them.  Heck, I don’t think I would have been able to figure out how to turn wheat into flour without the help of YouTube.  Yet someone way-back-when decided to see what would happen if they started grinding up some random grain.

A lot of trial and error must have gone on for ancient cultures to figure out how to use the plants around them.  The Inca were particularly well versed at using plants for food and medicine.   They knew how to cure urinary tract infections, bronchitis, ulcers, dysentery, and much more.  Oh, and their medical knowledge was much more advanced than that of Europe at the time! (Source)

Survival Takeaway: Get a field guide and start learning how to use the many wild plants growing around you!

Do you think ancient cultures were more knowledgeable than developed cultures today?  Let’s hear your thoughts in the comments below!