If you watch the news, then you can’t help but see the images of thousands of people on the move from war-torn countries to Europe and other safe havens.

But this post isn’t meant to be a political commentary on what is happening. Rather, it is about the survival lessons that preppers can learn from watching this crisis unfold.

Survival Lesson #1: It is Just Going to Get Worse

When you listen to the stories from refugees living in camps, there is one recurring theme. They all thought that they would return in just a few weeks. They didn’t expect to be living in squalid camps for years.

Humans are remarkably good at denying how bad a situation is. No one wants to believe that their home – or entire country – is going to get razed to the ground by war.

Nor do they want to believe that they will be victim of disasters like hurricane, earthquake, EMP…  Because of this denial, many Syrians waited too long to flee. And the ones who were forced to flee were not prepared.

Don’t fall victim to denial! When you see things getting bad, TAKE ACTION RIGHT AWAY. It is only going to get worse!

Survival Lesson #2: Have a Bug Out Bag Packed

Many of the Syrian refugees had to flee their homes without any time to pack. They ran out carrying whatever they could quickly grab.

As a result, you see Syrian refugees without basic survival supplies like decent shoes, jackets, and personal documents needed for evacuation.

A Bug Out Bag isn’t just for people living in war-torn countries like Syria. A disaster could strike at any moment, forcing you to flee. Read what to pack in your Bug Out Bag here. 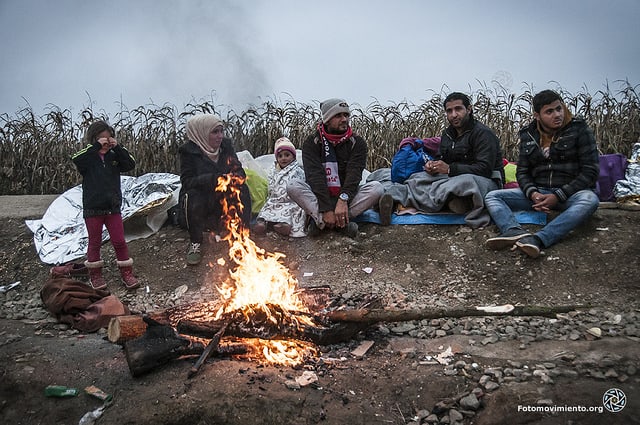 The refugees on their way through Europe are passing countries like Macedonia, Serbia, Hungary, Croatia, and Slovenia – countries that they may have never heard of.

Ruthless smugglers and con men are exploiting the refugees’ lack of geographical knowledge. There are countless stories of refugees being charged over $100 for 2-mile taxi rides which should have cost just $3.

But, if someone doesn’t know how many miles it is to the border, how can they gauge what is a fair price for a taxi?

Survival Lesson #4: Use Technology to Your Advantage

This is the first refugee crisis the world has seen in the era of the internet and social media – and it has made a major impact on how they travel.

Using this technology gives them an advantage.

Imagine how WWII would have been different if the refugees and victims had social media!

Of course, technology is only advantageous if you have power. Many volunteers have set up mobile docking stations at refugee camps in Europe, but you won’t find a place to plug in your phone while crouched in a cornfield while waiting to cross a border.

That is why I’ve got am emergency charger in my Bug Out Bag (solar and hand-crank are good options).

You’ve just gotten out of a cram-packed train with over 1,000 other refugees, and now have to walk 10+ miles to a border crossing. And then a deluge of rain starts hammering down.   Within seconds, your clothes are completely drenched.   All of the clothes and supplies in your backpack also get drenched.

You (and 1,000 other drenched refugees) arrive at the border only to learn you will have to wait there at least 24 hours before you can get registered and cross over. It is still raining and there is absolutely nowhere to hide from the rain. Being wet just makes you colder, and the hypothermia sets in…

This is what is happening all across Europe right now. To make matters worse, the rain has turned refugee camps into giant mud pits (after 600,000 people trample through an area, there isn’t any grass left so it all turns to mud).

After seeing the photos of refugees covered in mud, I added a few things to my Bug Out Bag. You will want to have:

No matter what the survival situation is, you can count on one thing: you will have to do a lot of walking.

It is vital that you take good care of your feet.

Even a small blister can quickly turn into a large wound, which means you will be walking a lot slower. Have good waterproof boots, lots of extra socks, and moleskin for treating blisters.

Survival Lesson #7: Have a Plan in Case You Get Separated from Your Family

In Hungary, a 3-year old refugee was found wandering a rural road all alone. The child had gotten separated from his parents during the chaos at the border.

This story of refugee children getting separated from their family members is quite common, especially as police hoard people onto buses and into camps.

One of the most important survival basics is to have a family communication plan. You also need to have a “in case you get separated” plan. Before heading into any chaotic situation with your family, establish a meeting point and protocols to take in case anyone is separated.

I can’t emphasize how important it is to know another language.

The refugees making their way through Europe right now have already learned this.

The ones who speak another language, especially English or German, are able to get information, find accommodation and resources, are less likely to get scammed, and are better able to negotiate for their family’s security.

Survival Lesson #9: Rely Only On Yourself

If there is one thing we can learn from the refugee disaster unfolding right now, it is this: you can’t rely on anyone but yourself.

The government is not going to come to your rescue.

Aid groups are not going to have enough blankets or food.

Everywhere you look, someone will be trying to scam or cheat you.

This doesn’t mean you won’t come across good people who are willing to help, or that you are doomed to survive the disaster alone.

When you meet good people, by all means, accept help! But don’t count on anyone to be there to help you in a disaster.

The only person you can rely on is yourself.