In survival and prepper communities, there is a lot of talk about what gear you need to “bug out” in the wild.  But the truth is that, in many disaster situations, you are probably better staying put aka “bugging in” or “hunkering down.”

For these situations, you will need to have urban survival gear.

The items on this urban survival gear are divided into categories based on what they are used for.

Take a look at the infographic and then I will go over the rationale behind each of the urban survival gear items below!

Everyday Carry (EDC) refers to all of the small items you can easily take with you every day and which serve multiple uses.

There is all sorts of cool EDC gear out there that you could buy.

For example, I’ve got a few cool EDC wallet-sized cards which can be taken out in case of an emergency.  I wear a survival belt which is made from paracord and has a blade and firestarter in the buckle.

You don’t need fancy EDC gear though.  You can easily make your own kits.  Here is how to make a urban survival EDC kit that can fit into an Altoids tin.

You may need to tweak this list based on your needs, but here is a good starting point.

*Keep this gear on you at all times!

Everyone should have at least 30 days of emergency supplies at home as well as the proper gear and knowledge to utilize those supplies.  But urban survival supplies are different than your standard prepping supplies checklist.

During disaster situations, your home could easily be looted.  What would you do if your supplies were stolen?

For urban survival, you must hide a stash of supplies in your home.  This is your cache.

*Keep these items hidden, such as in a buried PVC pipe.

Where to Hide Your Cache?

Here are some ideas on where to hide your secret cache.  You can read more here.

Note for the outdoor caches you will need to safeguard against water damage.  That is why a PVC pipe is one of my favorites: the lid twists right on the pipe to create a waterproof seal.

The terrorist attacks of September 11th are one of the worst examples of urban disaster that the USA has experienced.

It is also an example of how unprepared we are for the environmental hazards which occur during an urban disaster. 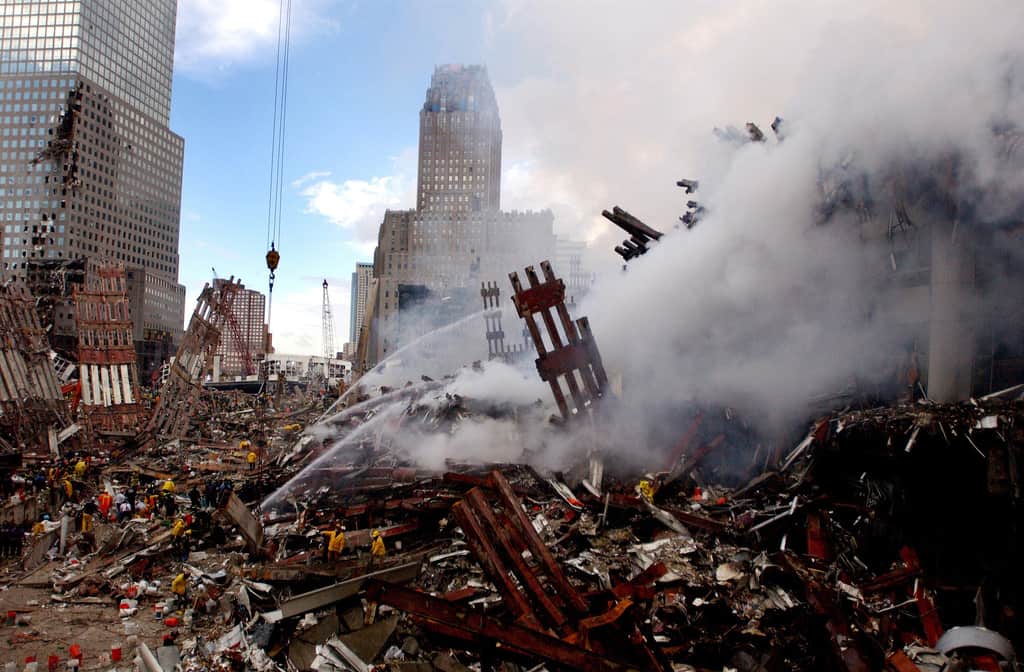 When the Twin Towers were struck, it caused a huge dust storm of construction materials to be released into the air.

Over a decade later, the disaster is still taking a toll in the thousands of cases of cancer and health risks it caused.   As of 2015, more than 2,500 WTC rescue workers and first responders have developed cancer.

It isn’t just asbestos you need to worry about.

To protect yourself from these environmental hazards, you will need gear like face masks, first aid items for cleaning and treating wounds, a method of purifying water, and heavy-duty gloves and boots to protect you from injury, such as from cutting yourself on rusty metal.

*Keep these items at your survival location.

4. Tools for Looting and Scavenging

We know that one of the things that typically happens within 24 hours of a disaster is looting.  Usually mobs of young men will break down the doors of homes, businesses, and government buildings to grab anything they deem valuable.

Do not join in the looting after a disaster!

Hopefully you’ve prepared and have enough supplies to get you through the first 30 days.  Ride out this time as peacefully as possible.  If you’ve secured the perimeter of your home , then you’ll be safe from invaders.

The mobs will still likely be going for the easy targets at that point.

From what we’ve seen in past disasters, the looting is always the worst in the first week to month.  After that, all the obvious supplies have been picked clean and only a few stragglers remain wandering through.

Wait until this moment to go out and start looting for supplies.  All the TVs and expensive stereo equipment will have been carried off (which will be useless in a disaster!), but you will still be able to find many useful items – like old cans for making a rocket stove and paper which can be turned into fuel.

To loot efficiently, you will need these supplies (which are included on the Urban Survival Gear Checklist). These items might be hard to find in the city after an urban disaster, even with good scavenging skills.  Make sure you stockpile them at your home base!

The Get Home Bag (GHB) is the “Hunker Down” version of a Bug Out Bag.  The contents of this bag are designed to help you make your way home during or in the aftermath of a disaster.

Everyone has different needs with their GHB.  The checklist is just for reference.  You’ll have to tweak it to suite your needs!

*Keep a GHB in your vehicle, at work, at school, and in your hidden cache.

Have you stockpiled all of this urban survival gear?  What else would you add to the list?