The Humble Crabapple: A Surprisingly Useful And Versatile Tree 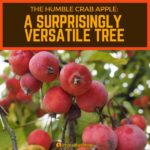 Crabapple trees and I go way back.

They littered the property where I grew up, and eating way too many of those hard, sour fruits was a bizarre pastime.

Spotting them during a hike is always a fun discovery, especially when you know how useful they can be with the right understanding.

As an outdoorsman, a homeowner, or someone who appreciates a nice tree, crabapples are worth your attention. 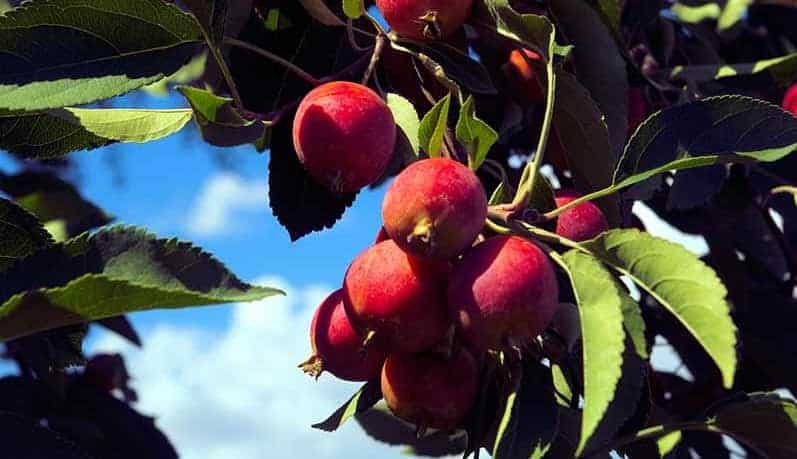 Crabs are a mainstay in the landscape for a variety of reasons, not least of which is their beautiful visual appeal.

These trees tend to be restrained compared to other trees in their growth and habit, and they reward the grower with four-seasons of appeal and interest.

In the spring the emerald-green foliage is a welcome sign of the warming weather, and before long the tree explodes in colorful blooms (some shade of white or pink).

During the summer the trees produce a nice hangout for birds singing. When mature or planted in groups the crabapple provides ample shade for a break from the hot sun.

At the end of summer and into the fall the fruit becomes available and is often as appealing as it is tasty. In the fall the leaves take on their characteristic golden-yellow tone.

The tree maintains a stalwart and interesting branch structure throughout the winter. Sometimes the fruits will remain on the tree into the winter months and add even more winter interest. 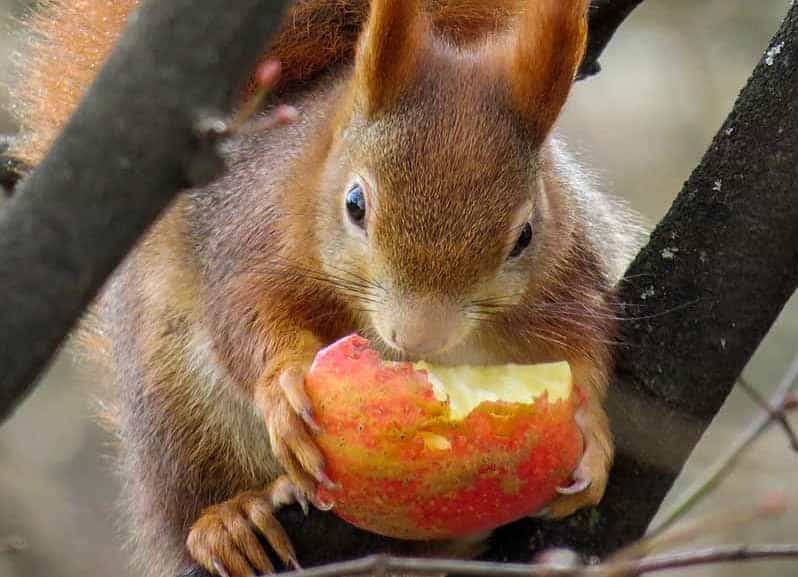 For better or for worse, wildlife are compelled to be near the crabapple tree.

Welcome visitors like honeybees and other pollinators have a love affair with the crabapple, but more troublesome critters like deer and some birds can scavenge the trees of any fruit and, in some cases, annihilate tender new green growth.

Pro Tip: A stand of crabapple trees is a handy location to be familiar with if you’re dependent on hunting wild game to survive.

Benefit to the Landscape 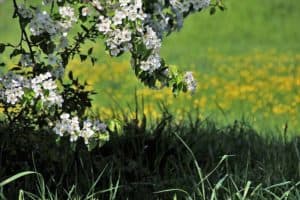 Besides their ornamental value, the crabapple is an easier form of a standard apple tree to grow and maintain.

Crabs require less pruning and tend to be more resistant to disease than regular apples, and they tend to bloom longer than other apple species.

This longer blooming period and the larger amount of pollen makes the crabapple very useful for the apple orchard.

While the exact process of apple tree pollination groups is a lengthy topic to explain in detail, we can summarize with the following;

Apples trees are grouped into seven different pollination groups based on when a particular tree is in bloom. Without other trees in bloom at the same time, the apple tree will be unable to produce fruit.

That makes crabapples, with an extended blooming period and an excessive amount of pollen, perfect candidates for selecting your apple tree’s pollination buddies.

This handy reference is vital for knowing when your apples will be blooming. 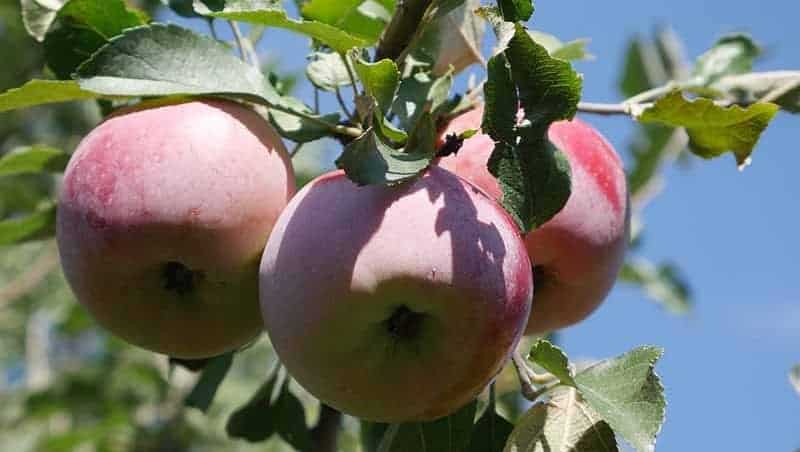 Maybe it’s an acquired taste, but I freakin’ love crabapples. They tend to be sour and pithy, but the right apples from the right crabs really hit the spot when your stomach is growling.

They are almost identical to regular apples except for their size; crabs are under 2”, while regular apples are over that size. Otherwise, the fruits are very similar to each other.

Note: Parts of the apple (the seeds, stems, and leaves) contain minute amounts of cyanide. While you should avoid eating these parts of the fruit, you’d need to eat a lot of apple seeds (a few hundred) to be in any danger.

While some apples can be eaten right off the tree, generally the larger ones, the smaller and stonier varieties should be prepared before you eat them.

Some people will experience stomach cramps from eating crabapples, but it’s a very mild unpleasantness to experience.

The smaller, stonier crabapples can be made into jellies, pectic, and even wine.

My wife was born and raised in Upstate New York and introduced me to crabapple syrup. It’s an acquired taste, but holy smoke, this is some tasty syrup! I’m not big on sweet things, and this syrup is just right for my palette.

Normal apples are far easier to predict ripeness, but crabs aren’t difficult when you know a few tricks.

Brush up on your foraging knowledge before ingesting anything you find outdoors!

The surefire method is to cut one of the fruits in half and to inspect the seeds; if they’re brown, the apple is ripe, but if they aren’t then the fruit is still too young to eat.

Check a few different fruits to get a better idea of the “total ripeness” of the tree.

Harvest the fruit when the flesh is still firm, but not so hard that you can’t take a bite. The fruit is often ready in the fall or late summer, so any fruit harvested before then is not likely to be ripe.

The wood from an apple tree is, with a few exceptions in each tree, very straight grained. That makes the wood a pleasure to bring a whittling knife to, and it’s a breeze to chop for firewood.

Crabapple wood is my favorite to cook with (cherry is a close second) because of the mild flavor it leaves behind. Other woods like hickory and mesquite bring too much of their flavor to the table. It’s perfect for cooking pork, and even better for poultry, but for game birds?

You haven’t lived until you’ve had some wild grouse cooked over an apple wood fire.

Wood from crabapples isn’t suitable for building, not least of all because of how many trees you’d need to fell to get anything useable.

The easiest method for identifying crabapples is to spot the tree when it’s in bloom, or when it’s covered in fruit.

These methods are almost fool proof; the fruit is a small apple in most cases, or looks like a cluster of tiny apples in ornamental varieties.

Cut a piece of fruit in half along its middle (or the “equator” if you imagine the fruit as a tiny globe), and look for five seeds; if it’s got five, you’ve got yourself a crab. Checking these seeds is also the best way to tell if the fruit is ripe.

Besides the iconic fruit, a crabapple is easily identified because of how dense the white-and-pink flower cover is when it is blossoming. In many cases it’s almost impossible to spot the leaves underneath the flowers!

The flowers themselves have five petals and are most often opened during April or May. 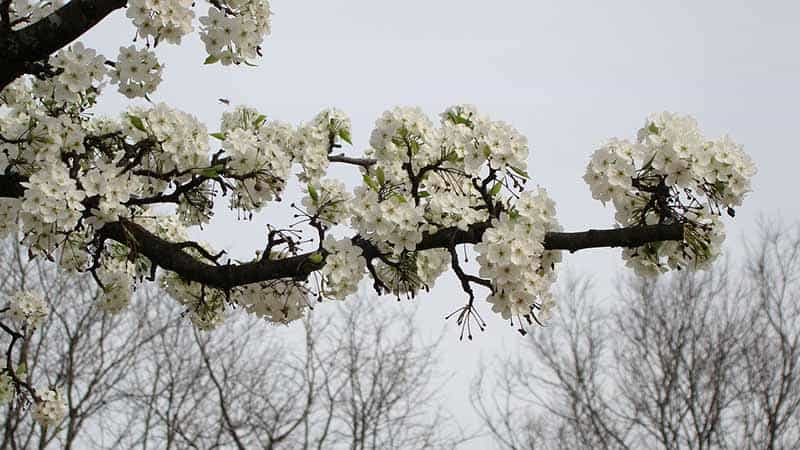 If you stumble on what may be a crabapple and it’s not in bloom or in fruit, you can still identify it by its leaves. The early spring growth tends to be a light and pleasant green, turning to a deep-hued emerald over the summer, and finally to a golden yellow in the fall. Some cultivars may produce red or orange leaves.

The leaves are simply shaped and have a slightly toothed edge. The underside is often a whitish green and sometimes appears to be fuzzy.

The bark of a crabapple is pretty distinct, a grey and scaly patchwork of knotted wood running in an upright/straight grain. Bark does not possess any stripes. 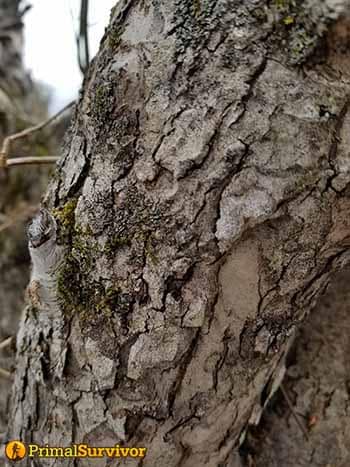 A Versatile Tree to Have Around

Whether it’s in the field, the yard, or lining city streets, the crabapple is a common tree with uncommon value.

Keep your eye out the next time your outdoors and maybe snag some of these sour apples to taste, and if you’ve room in your yard for a new tree, give the crabapple a try. You won’t regret it.