The 10 Prepper Fitness Skills and How to Master Them

Prepper fitness almost inevitably gets brought up in survival forums and blogs.  However, it is always treated as an afterthought. “I’ll worry about fitness after I get all my food/water/gear/etc. stockpiled.”

If past disasters have taught us anything, it is that we can’t count on our stockpiled goods to get us through.  The best survival resource we have at our disposal is ourselves – which is why we should start looking at physical fitness as an integral part of disaster prepping.

Are You Fit for Survival? 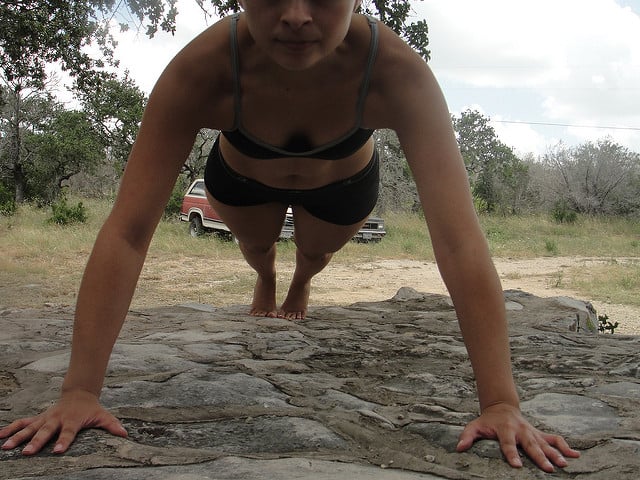 There are a lot of great survival schools in the country.  Some courses will give you a taste of how physically demanding survival is.  However, most of us haven’t been tested in true SHTF situations.

So, why do so many unfit preppers think they’d survive alright?

The Over-Reliance On Firearms for Survival

While going through Prepper Forums, I came across this comment:

In a SHTF world I don’t think we’d need to be superfit to survive would we? As long as our trigger finger (for gun or crossbow) is in good shape we should be able to do alright. We’d just either barricade ourselves in our home with our food/water stockpile and sit tight, or travel to an out-of-town bugout location by vehicle or bike and sit tight there. We wouldn’t even need to run after game, because no animal can outrun a bullet, crossbow bolt or arrow.

This guy has obviously never had to run through a minefield while being fired at by snipers.  I doubt he has ever even been hunting.  Even in the best-planned conditions, hunting still requires a lot of physical skill, like endurance and strength for carrying a heavy weapon long periods of time.

As a whole, preppers are overly reliant on their firearms.  If your entire prepping plan comes down to, “stock more bullets,” then you are probably not physically fit for survival.

Adrenaline Will Not Save You

We’ve all heard stories about how adrenaline allows us to perform superhuman feats, mothers being able to lift cars off their children.

In extremely stressful situations, adrenaline and cortisol do increase our physical abilities. However, the science shows that these effects are exaggerated.  If you can normally lift 100lbs, stress might help you lift 130lbs – but not a 3,000lb car!

Even if adrenaline was capable of turning us into superhumans, the effect is short lived. Once the surge of adrenaline wears off, you feel extremely fatigued.  In a survival situation, you wouldn’t be ready for the next threat.

Before starting any prepper fitness routine, you need to establish what your goals are.

Here are some prepper baselines to consider.

“Fitness” can be broken down into 10 individual skills.  These exact same skills also apply to prepper fitness.

Obviously, there are some differences – like the difference between going for a casual run and having to run away from an attacker.  However, the skills are fundamentally the same. 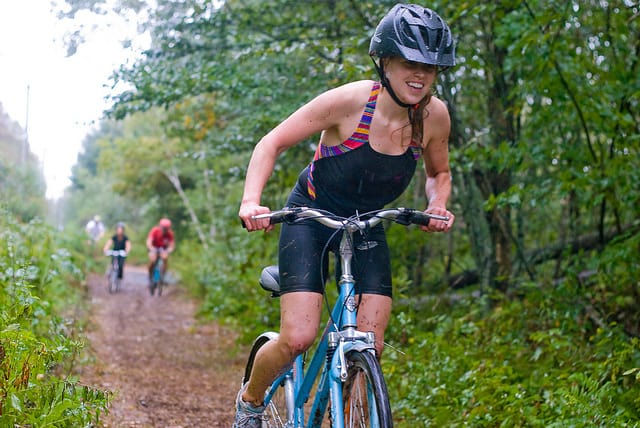 I probably don’t have to tell you how important cardio health is for survival.  If you are wheezing at tasks like hiking, chopping wood, or rowing, you won’t make it very far.  Running is one of the easiest ways to improve your cardiovascular fitness.

Example: Being able to walk/run for hours at a time when fleeing a disaster zone.

Also referred to as muscular endurance, stamina is how long your body can perform repeated muscle contractions.  Stamina is built by doing weighted exercises.  The key is to perform lower-weight exercises at higher repetitions.

Example: Chopping and stacking firewood for an entire day.

Go to a gym and you’ll see a lot of people obsessed with strength training.  However, remember that having strong muscles is only one prepper fitness skill.  If those muscles aren’t also flexible and have cardio endurance to back them up, then the strength is only useful in situations where you need a lot of power output at once.

Example: Being able to lift concrete rubble from a blocked passageway, such as when trapped during an earthquake.

Yoga has gotten very popular with women, but it is still taboo for men to work on their flexibility.  Just look at any ripped jock in the gym.  They can lift heavy weights, but those muscles will snap quickly if pressure is exerted in the wrong direction!

You’ll need to work on both static and dynamic flexibility.  If you don’t, your likelihood of injury while doing other prepper fitness skills increases.

Example: Being able to pull someone over a wall without pulling your rotator cuff. 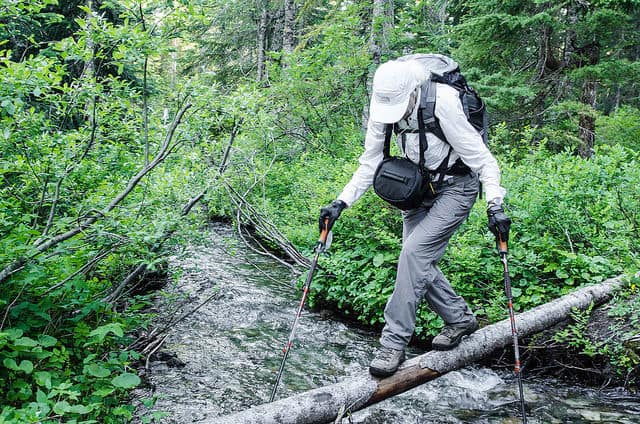 Now we arrive at the neurological fitness skills.  These skills are trained through practice.  By contrast, the organic fitness skills listed above (endurance, stamina, strength, flexibility) produce observable changes in the body.

Balance is a very good skill to have in outdoor survival situations. I can’t the number of times I’ve had to cross streams by stone-hopping or balancing on logs.

*In an urban survival environment, I’d bet “roofers” would have an edge. I’m not sure why anyone would want to do something so reckless (Russians are crazy!) but damn his balance is great.

Accuracy is defined as, “The ability to control movement in a given direction or at a given intensity.”  This prepper fitness skill is important for a lot of homesteading tasks, such as chopping wood, driving stakes, and plowing.

Example: Throwing a heavy spear and hitting your target.

Agility is “the ability to apply explosive movements to rapidly change directions.”  I can’t help but think of my Bosnian friends for this one.  During the Siege of Sarajevo, people had to regularly run across “Sniper Alley” on their way to collect water and supplies.  Speed was obviously important, but the agile ones who could change directions like cats would be harder targets for the snipers.

It wasn’t until I tried bow hunting that I realized my coordination needed work.  You’ve got to have a good sense of spatial orientation and rhythm so you can react quickly.  To practice coordination, try playing catch, learn to juggle, or jump roping.

Example: Running through rough terrain without twisting an ankle or getting whacked in the head by branches.

Speed and power are a combination of organic and neurological skills. They require both physical training and practice.

A bit part of speed is reaction time.  You can be the fastest runner in the group – if it takes you a long time to react, you could be the one that falls victim.

Balance exercises are particularly good for improving reaction time. You can also play card games like “Slapjack.” But remember that having a clear head – free of stress and alcohol – is also important for reaction time.

Power is a combination of strength and speed.  A huge amount of strength being released quickly results in high power.

Jumping sports like basketball and volleyball require a lot of power.  A big part of prepper fitness is learning how to utilize power. For example, I’m not strong enough to rip a standard door off the hinges.  But, by running at the door at high speed, I could break it down.

Example: Jumping over a high fence. 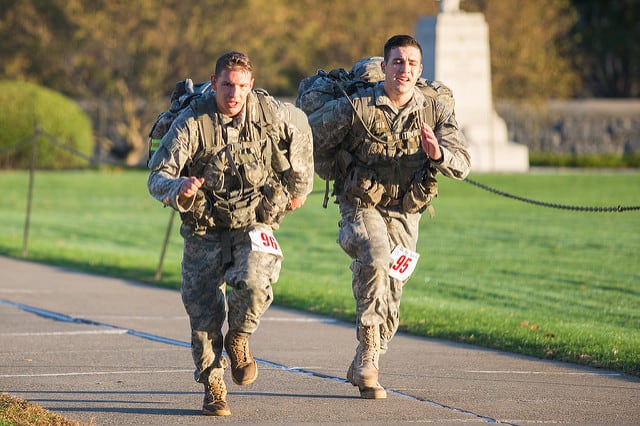 It’s easy to focus on one or two of the prepper fitness skills and consider yourself “ready.”  However, total fitness depends on your mastery of all 10 fitness skills.

For example, a person who can easily beat the crap out of a 200lb attacker might not have such an easy time outrunning the attacker!

The good news is that you can practice multiple fitness skills at once.  Here are just some examples of exercises preppers can do and what skills they develop.

I tried to be a bit creative with these fitness activity ideas.  Obviously, there are tons of traditional exercises you could do that would help you develop prepper fitness. Krav maga and CrossFit are two popular options with preppers.  Boxing is also great, especially for neurological skills like increasing reaction time.

Are you working on your prepper fitness? What types of exercises are you doing?