How to Preserve Food with DIY Pickling

Pickling involves soaking foods in an acid or brine which prevents harmful bacteria from growing.  It is incredibly easy to do (though some foods do have a high learning curve).

Picking your own food is also very cheap since you don’t need any special equipment.  You can even use recycled jars.

Why Learn to Pickle Foods?

How to Pickle Foods

There are two ways of pickling foods: vinegar pickling and lacto-fermentation.  The processes and results are very different.

The first method of pickling involves vinegar.  You simply soak the food in vinegar which has at least a 5% acidity.  Some methods call for you to boil the food in the vinegar solution.

There is a lot of controversy as to whether these “quick pickles” need to be refrigerated.  So long as the lid stays on, then the vinegar should preserve the food for up to several weeks – even out of the fridge.

However, there is a risk of contamination when the vinegar pickles are left out of the fridge.  Thus, to make the pickles last for a very long time, they should be canned after pickling.  When canned, the pickles can last 5+ years.

Read this post on home canning instructions for more. 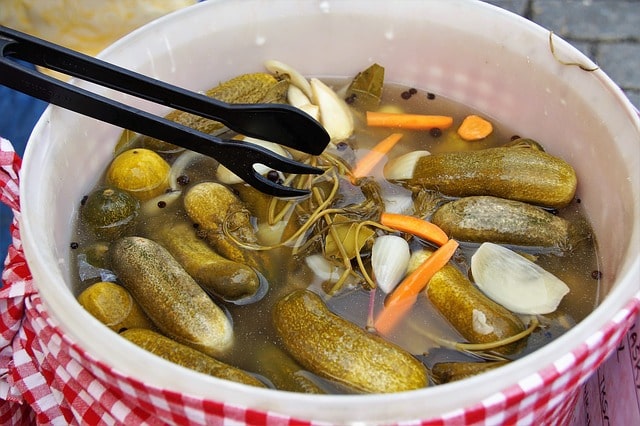 This method of pickling is very popular now, especially because it creates gut-healthy bacteria.  It involves submersing food in a brine of salt and water.  The salt draws natural sugars out of the food.

Lacto bacteria, which are naturally found on the surface of food, eat these sugars and produce lactic acid as a result.

The acidic, oxygen-less environment prevents bad bacteria from growing. So long as the food stays under the brine, it will be protected by the healthy lacto bacteria in the brine. 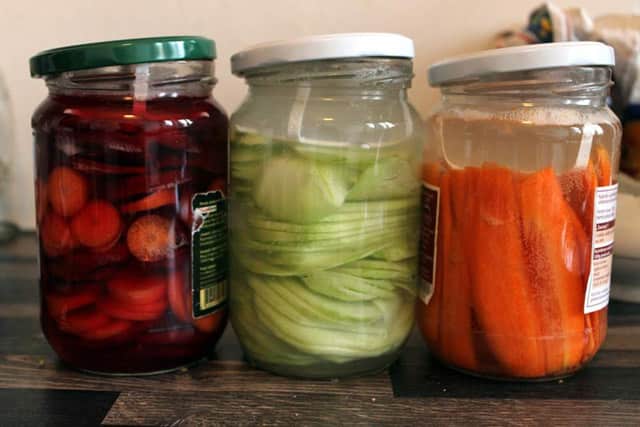 Lacto-fermentation is as simple as these steps:

Getting the Food to Stay Under the Brine

The trickiest part of fermenting (at least for me) was getting the food to stay under the brine.  Some people recommending boiling a rock to use a weight.

Another popular recommend is to use a cabbage leaf which you press on the pickles.  The cabbage leaf also needs to stay under the brine.

I still ended up with food floating to the top of the brine with these methods.  Better methods are: 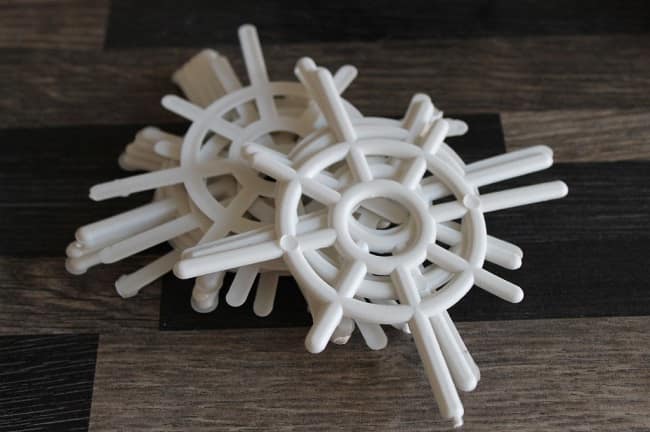 As soon as the food is fermented to your taste, put a lid on them and move to a cool, dark place (like a fridge or root cellar).  The cool temperature will slow down fermentation.

So long as the temperature stays below 65F, fermented vegetables should last around 4-18 months.  Fruit ferments only last about 1-2 months.

To get your pickles to last longer, they will need to be canned.  This involves pouring the brine in a pan, boiling it for about 5 minutes, and then putting the food and brine into canning jars. The jars can then be processed with a water bath canner or pressure canner.

Unfortunately, the canning process will kill the healthy bacteria in natural ferments.  However, that’s the tradeoff for having food which can last 5 years.

The bacteria responsible for fermentation produce gas as a byproduct.  If you seal the jar tightly during fermentation, the gas can build up in the jar and cause it to explode.  To prevent this, you need to only loosely cover the jars while fermenting.  Some people just cover them with cheesecloth or coffee filters.

After a few days of fermenting, the amount of sugar available for the bacteria to eat will be lower.  This will slow down fermentation.  Cold temperatures will also slow down fermentation, which is another reason you need to move ferments to a cool location after they are fermented to your liking.

However, the bacteria can continue to ferment even in a refrigerator.  Over time, the gases will build up and you might end up with an exploding jar.  There are a few ways you can prevent this from occurring: