Making and Using a Slingshot For Hunting and Survival

Humans have been using clubs, spears and other primitive tools to hunt game and defend themselves since the dawn of time.

And while the steady march of progress has rendered many of these tools obsolete, a few have stood the test of time and retain their value for modern survivalists.

The slingshot is a great example of such a tool, and whilst it may not offer the value of a firearm, it can certainly help you survive some difficult situations.

Below, we’ll discuss the benefits and uses of slingshots, and provide some tips for choosing a high-quality product or making your own DIY version.

The Benefits of a Slingshot: An Ideal Survival Tool

Despite their ancient origins – modern slingshots were only made possible following the invention of vulcanized rubber in the middle of the 19th  century, but primitive slingshots have been used in military applications since at least the 2nd century .

Slingshots are valuable tools for survivalists because they are:

Primary Uses of a Slingshot

Slingshots can be used for a variety of purposes, including the following:

Hunting is the most common purpose for which slingshots are used, and it’s easy to see why: Slingshots are stealthy, lightweight, easy to use and effective for taking small game.

While they lack the range of firearms, bows and other hunting tools, their small size and silent nature make them well-suited for hunting rabbits, rodents and birds at close range.

While you certainly don’t want to bring a slingshot to a gunfight, wrist rockets can serve as reasonably effective self-defense tools in some cases.

Once again, their small size, portability and quiet nature make them effective for deterring threats at close to moderate distances.

Note: Slingshots are capable of delivering a lethal blow, so be sure that you are justified in using one before sending a metal pellet flying through the air at another human. 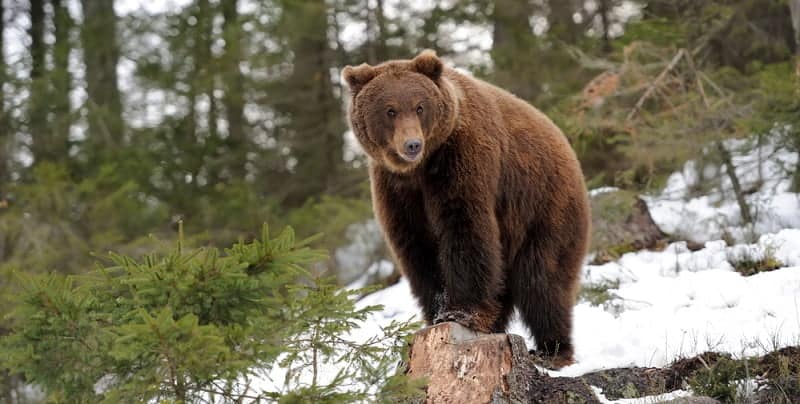 You may even need to hang ropes from a tree to provide support for your shelter. But unfortunately, it is often difficult to toss a rope up into a tree effectively.

However, if you tie a piece of cordage to a projectile, you can easily use your slingshot to help hang a rope from a tree.

Just use an arcing trajectory and aim a few inches above your target branch. With a little practice and patience, you’ll be able to send the projectile – and the attached rope – up and over the branch.

Arborists and tree pruners use this trick all the time.

Slingshots can be helpful for sending messages across impassable obstacles, such as rivers or canyons.

Simply attach a small note to a projectile and send it on a high-arcing path toward the target area.

Just be sure to use caution so you don’t injure the people with whom you are trying to communicate, and be sure they are expecting the projectile, so they can seek cover.

With a bit of forethought and a few well-placed projectiles, it is often possible to spook game animals, causing them to move toward you or into a waiting trap.

For example, you could send a projectile over the head of a squirrel so that it crashes into the bushes behind him. This will usually send him sprinting in your direction, where you will be waiting to take advantage of an easier shot.

How to Hunt with a Slingshot

Hunting with a slingshot is a fairly straightforward pursuit, but you must follow a few rules and guidelines to have a good chance of success.

Although they require much greater accuracy to hit, small animals are more appropriate for slingshot-equipped hunters than large animals are.

Few slingshots pack the power to stop a deer or pig in its tracks; they’ll usually do nothing more than wound the animal. This should be avoided at all costs, so stick to squirrels, rabbits, rats, birds and similar prey.

Watch the video below to see small game hunting in action.

Slingshots are only effective at relatively close range, and you’ll usually want to creep to within 20 or 30 yards of your quarry before releasing a projectile. To get this close to a squirrel or bird, you’ll need to move slowly and quietly to avoid spooking your prey.

Aim for your prey’s head.

Accordingly, you’ll want to aim for the head of the animal in your sights, rather than its body.

Headshots require much more accuracy than body shots, given the smaller target area, but they are typically lethal, while body shots will only wound the animal.

Watch this in-depth video if you want to learn more about how to aim your slingshot:

Important Features in a Slingshot

While there are a plethora of commercial slingshots on the market, they differ widely in terms of quality, price and features.

It pays to be a discriminating shopper, as this will help you get the most value for your survival-gear dollar.

Generally speaking, this means selecting a slingshot that possesses the following features and characteristics:

Buy a Slingshot or Make Your Own? 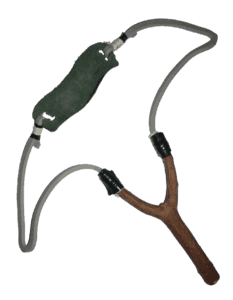 Slingshots, like most other primitive weapons, are relatively easy to make.

Of course, DIY slingshots are unlikely to be as accurate as commercial versions, but with a little effort during the construction process and plenty of practice, once you’ve completed it, a homemade slingshot can be an effective tool for acquiring food and defending yourself.

Most of the components of a slingshot are easy to acquire:

You can find a sturdy Y-shaped stick, a bit of leather (although any strong fabric would work in a pinch) and a few feet of cordage just about anywhere. However, you’ll also need to use something for the bands, with surgical tubing being the ideal choice.

Surgical tubing will likely be hard to find in a SHTF situation.

Some of the better first aid kits may include a few feet of tubing, but there aren’t many other reliable sources for the material. Inner tubes can be used instead of surgical tubing, but they aren’t quite as effective.

Accordingly, many survivalists and preppers like to keep a few feet of surgical tubing in their bug out bag.

Surgical tubing is inexpensive, (Amazon Link) lightweight and doesn’t take up much space, so there are few downsides to throwing a bundle in your pack. Additionally, surgical tubing can be useful for other applications, such as making a tourniquet.

While the process is fairly simple and straightforward, the entire project will take you several hours (even if you “cheat.”)

First, gather all of the things you’ll need to make the slingshot. This includes:

You can see a slingshot being made in this video.

There are also plenty of great commercially manufactured slingshots on the market. We have included a couple of recommended ones below.

Part of the beauty of a slingshot is that you can use just about anything small, hard and heavy as a projectile. Steel shot (Amazon Link) is the gold standard, but you can use a variety of other objects including:

Obviously, none of these projectiles will perform as well as steel shot, and they’ll all exhibit different flight characteristics.

However, you can learn to account for these differences with practice, so be sure to take your slingshot and a variety of different projectiles into the backyard for a bit of practice so that you are ready to use whatever is handy.

Understand that slingshots are not toys – they are weapons that require respect and care during use.

If you don’t use a slingshot properly and keep safety in mind, you could hurt yourself or inflict serious injuries on others.

Be sure to follow the safety rules listed below.

It is a good idea to go ahead an order a pack of replacement bands (Amazon Link) so that you never have to take chances with old, worn out bands.

They aren’t expensive at all, and you’ll feel better knowing that you have a backup set on hand.

It is also worth mentioning that you’ll want to make sure slingshots are legal in your area before heading out into the backyard to practice.

Laws vary from state to state (and they change from time to time), so be sure to check out the legal environment before making your purchase.

As you can see, a slingshot is a very useful tool that can help you survive difficult situations.

Because they are silent, simple and lightweight, they make a great addition to any bug out bag. And because they’ll fire anything from steel shot to small rocks, you’ll rarely have to worry about running out of ammo.

You’ll usually be best served by purchasing a commercially manufactured slingshot, but you can always make your own in a pinch (just remember to stash a bit of surgical tubing in your pack).

Be sure to practice with your slingshot enough to become proficient in its use, and you’ll be better prepared to feed and defend yourself in a survival situation.