How to Treat a Gunshot Wound, Even When Help Is Not Available

Up until fairly recently, “normal” people didn’t have to worry about getting shot.  This is no longer the case.

In 2019 alone, the United States experienced more than 400 mass shootings. These shootings represent just a small percentage of the 113,000 people shot each year.

This isn’t a discussion about gun control or safety though.  Rather, I mention these numbers to show why it’s important for everyone to know how to treat a gunshot wound.

Many of these gunshot deaths could have been prevented with simple steps to control bleeding while waiting for EMS to arrive.  Just like we learn CPR and the Heimlich, gunshot treatment should be added to the list of basic first aid skills to know.

Below are step-by-step instructions on how to treat a gunshot wound, including what to do if help is not available. 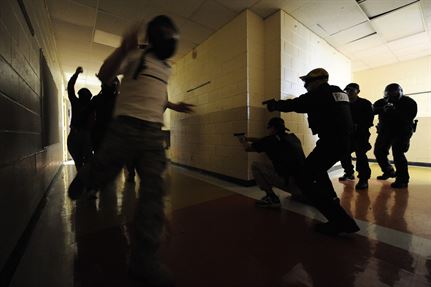 Real gunshot wounds aren’t like you see in the movies.  In the movies, the character will either die quietly and immediately.  Or he will somehow continue running around and killing bad guys.

Real gunshot wounds are agonizing. The victim may be screaming.  There will be blood everywhere.  The scene can be chaotic with running, screaming bystanders.

You won’t be much use to the victim if you freak out and can’t remember the first aid steps you learned.  So, in addition to learning how to treat a gunshot wound, you must also get mentally prepared.

Soldiers and medics mentally prepare themselves by training in realistic scenarios, complete with actors with fake wounds and blood.  As a civilian, here are some ways you can prepare:

You should never risk your own life to help someone else (though I can’t say I wouldn’t do that to save my kids…).  Before administering first aid, make sure the scene is safe.

With blood gushing everywhere, it can be hard to find the bullet wound entrance and exit site (if there is an exit).  You may need to remove clothing – which is one more reason to always carry a survival knife with you.

You will treat the more severe source of bleeding first.

In many senses, treating a gunshot wound is just like any other penetrating wound (see this post on how to treat a knife wound). However, with gunshots, there is a much higher likelihood of other injuries.

Even if the actual bullet wound seems minor, the internal damage can be severe.  Most people who die of a gunshot wound die because of internal bleeding.

How To Control The Bleeding 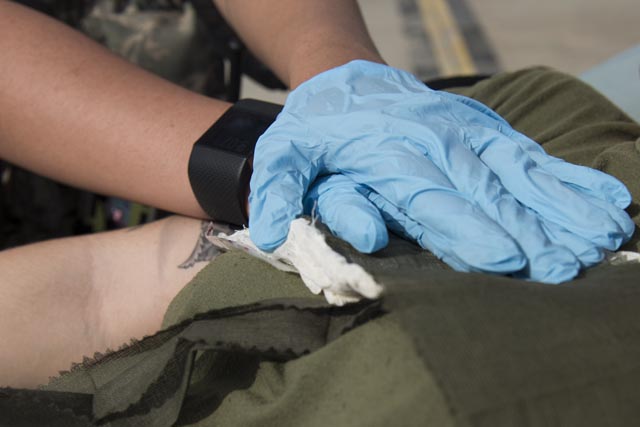 The first step in treating any bleeding wound is to apply pressure.  If you don’t have any first aid supplies with you, then cover the wound with anything absorbent you have available: a scarf, your shirt, the victim’s shirt…

Don’t worry whether it is clean or not.  Just start applying pressure. The immediate risk of blood loss is more important than the later risk of infection.

Gunshot wounds are deep.  You will need to press down hard.  Don’t be afraid to put your full body weight over the wound. 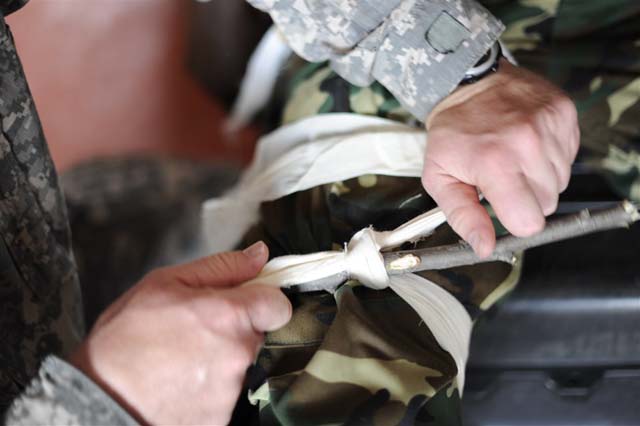 If direct pressure doesn’t control the blood loss and the gunshot is on an arm or leg, apply a tourniquet.

Even if help is hours away, it’s still better to choose life over limb.  Don’t wait to apply a tourniquet.

Read this post about how to apply a tourniquet and see these best tourniquets.

Gunshot wounds are incredibly deep and can cause severe internal bleeding.  Applying external pressure often will not stop internal bleeding.  Civilians will rarely have to do this but, if help is not coming anytime soon and the bleeding won’t stop, you can pack the wound.

Here are instructions on how to pack a severely bleeding wound:

Do NOT use a Tampon to Treat a Gunshot Wound

One myth floating around is you should use a tampon to plug a gunshot wound.  While this may have been done successfully by US Army Medics in the era before IFAK kits, it is a terrible idea to plug a wound with a tampon.

This isn’t to say you shouldn’t use a tampon to pack a wound if you were shot in a remote rest-stop bathroom and there was literally nothing else available.  However, any type of cloth is going to be a better wound packing material than a tampon.

If you don’t have a hemostatic dressing or gauze available, the American College of Surgeons recommends using clothing to pack a wound. It can be your shirt, pants, towels, etc.  Even if your clothes are dirty, it’s still better than a tampon.

Note: This is one more reason to always carry a knife or multi-tool every day; it could be used to cut clothing into strips for packing a wound or making an improvised bandage.

Packing a Bullet Wound with Dirt

In theory, in situations where stopping the bleed is priority, then packing a wound with dirt would make sense.  However, I can’t imagine a scenario where a gunshot wound occurs and you are completely naked with nothing else available.

For most of us, it’s unrealistic to carry hemostatic dressings around with us every day.  If a gunshot wound occurs, you’ll have to use whatever you have on hand – like your shirt or jacket.

However, if you are traveling someplace where medical help will not be available or is hours away (like on a hunting trip), then always bring a first aid kit with hemostatic dressings.  Likewise, keep a complete first aid kit in your car. It’s better to be prepared than pay the price!

With gunshot wounds, controlling bleeding is the most important thing.  Once bleeding is under control, you can check the ABCs: Airways, Breathing, and Circulation.

If the gunshot victim is not breathing, start with CPR.

Gunshot wounds between the neck and bellybutton could have hit the lungs.  This can result in a collapsed lung.  To keep air out of the wound, chest wounds should be covered with a seal.

You might have seen a credit card being used to seal a chest wound in the movies. This would work, something like plastic wrap which covers more surface area would work better.

The best solution however is a chest seal gauze made specifically for this scenario, You can purchase them on Amazon pretty cheaply.

What If No Help Is Available?

This is a prepping website, so I want to address how to treat a gunshot wound when no help is available.  Think war zones or remote wilderness areas.

While the human body is amazing at healing itself, you are probably out of luck if you get a gunshot wound away from an operating room.

As surgeon David Newman said, internal bleeding is what kills most people who die of gunshot wounds.  In the OR, the surgeons actually split the victim wide open so they can see exactly where the blood is coming from.  An entire medical team will do things like clamping blood vessels.  If the intestines have a bullet hole in them, they will cut the damaged area off and reattach it.

If the gunshot wound was from a high-velocity weapon, “it’s like an explosion” went off inside the body. It can shatter bones into hundreds of pieces which get sprayed throughout the body.  It takes a lot of expert surgical work to remove all the bone shards and fix the damage.  If no help is available, it’s not likely you are going to survive.

But gunshot wounds are crazy.  A person can get one hit in a seemingly benign place and die.  Another person can take 10 shots and somehow still survive. If help is not available: