One of the biggest mistakes that beginner preppers make with emergency food storage is forgetting that it can go bad.

The last thing you want to happen after a disaster is to reach for your food stockpiles only to realize they are all inedible.

So just how long does canned food last? And how do you make sure your canned emergency food supply stays safe to eat?

Contrary to what most people think (or are led to think), there are NO federal laws about expiration dates on food.  The only exception is for infant formula, which is required to have an expiration date.

Some states do have their own laws requiring sell-by dates on meat and dairy products – but none legally require it on canned foods.

So what are those “best by” and “use by” dates on canned foods?

Those are arbitrary dates that the food manufacturer slapped on their products.

In some cases, such as with fresh milk, it does make sense to have an expiration date.  No one likes to buy a gallon of milk only to realize it has already started to spoil.

However, with canned foods, the expiration date has nothing to do with whether the food is safe to eat! 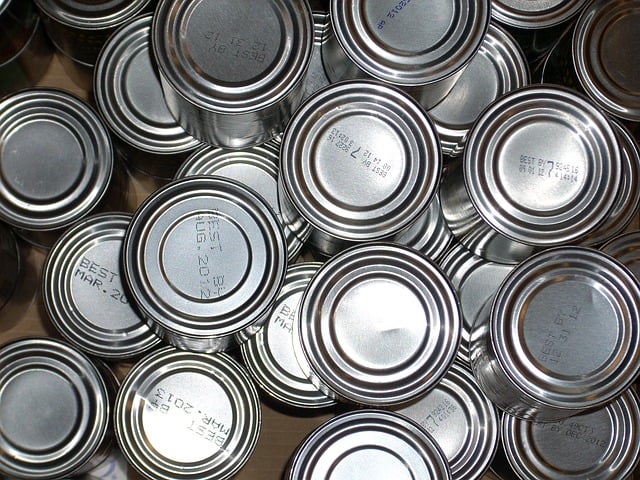 Canned Foods Are Safe to Eat for Decades

Let’s say that a disaster has struck.  You and your family are starving to death.  You miraculously find an old can of beans tucked away… But the expiration date past 5 years ago.  Do you eat the expired canned food?

The National Food Processors Association (NFPA) is a research group that looks into issues like food expiration dates and freshness. They once got their hands on some old cans of food.

One of the scientists analyzed a can of corn from 1934 and found it to be pretty much as good as a new can of corn.  The only difference in the analysis was that some nutrient levels were lower.  The same was found true of very old cans of oysters, tomatoes, and red peppers.

Since canned foods are sterilized and then sealed in an air-tight environment, they won’t breed bacteria.  The reason for the expiration date has to do with freshness and taste.  After a while of sitting in water, the canned foods can get mushy and lose their flavor.  They’ll still be safe to eat, just taste gross.

Again, you can still eat canned foods after this time period.  They might not taste as fresh as when they were canned and may have lost some vitamins, but they will still probably be safe to eat.

When NOT to Eat Expired Canned Foods

In general, canned foods can last for decades after their expiration date. But this doesn’t mean they are always safe to eat.

If air manages to leak into the canned food, such as if the seal breaks, then it could become contaminated.  Botulism is a big risk here.

Botulism, which is caused by the bacteria Clostridium botulinum, releases toxins that can paralyze or kill you.  Botulism used to be fairly common because of bad home canning practices. The bacteria weren’t killed before canning the food and they would multiply within the can.

You can’t see or taste botulism on canned food. However, there are other signs that a can of food might have gone bad.

Exterior Signs a Can of Food Has Gone Bad:

Interior Signs a Can of Food Has Gone Bad:

If you see any of these signs that the canned food has gone bad, do NOT eat it!!!  Don’t risk your or your family’s health!

Just because canned food can last for decades, it doesn’t mean you should let it sit around for decades.  To play it safe, make sure your canned foods are fresh by rotating them.

The best advice I can give for making sure your canned foods (and other survival foods) are rotated is this:

Only stockpile emergency foods which you normally eat on a daily basis!

For example, if you don’t usually eat rice and beans, don’t make these part of your 30 day emergency food stockpile.  You’ll never rotate through your stockpile before it expires.

Plus, who wants to suddenly start eating a bunch of weird new foods in the wake of a disaster?

It would be small comfort to have your favorite foods stockpiled to get you through the event.

So long as your emergency foods are foods that you normally eat, you shouldn’t have a problem with rotating.  Just use the “new-in-the-back” system: each new food item gets put behind the old ones.  Anyone who has done a stint working in a grocery store knows all about this!

For canned foods, you can also install a can dispenser in your pantry.  The cans come out of an opening on the bottom.  New cans go on the top.  Can rotating systems are also pretty easy to make. See our guide to the best can organizers.

Rotation is obviously also important for your other survival foods, like dry grains, dry beans, and packaged foods.

It is a good idea to write the purchase dates on them before you put them in your pantry (behind all the older foods you previously bought).

The more organized you keep your pantry, the easier it will be to keep these rotated.

Are you rotating the cans which are part of your emergency foods?