How Does A Composting Toilet Work?

Given the right conditions, anything will rot.  Composting can be defined as optimizing conditions so aerobic bacteria and other organisms consume the waste, destroying any harmful bacteria and pathogens in the process. The end result is fertilizer which can be safely handled and spread on your garden.

Just like how you can compost household scraps, you can also compost human waste. It may seem scary to put composted fecal matter on your garden.  However, the process is actually fairly easy.  There are even many newer models of compost toilets which simplify the process. 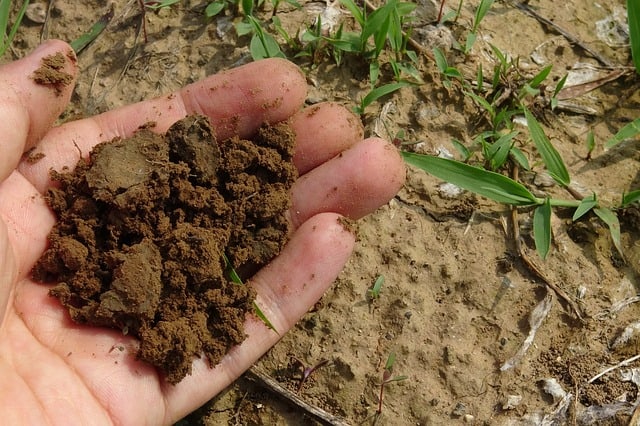 Bacteria can be divided into two types: aerobic and anaerobic. Aerobic bacteria require oxygen levels of at least 5% survive.  By contrast, anaerobic bacteria thrive in conditions where there is no or little oxygen.

Aerobic bacteria are what you want for composting.  They are very efficient in turning waste into compost.  They eat up the waste and excrete nutrients which are great for your garden, such as nitrogen, phosphorus, and magnesium.

You may have read about these when setting up your compost pile – like mesophilic and thermophilic bacteria.  The temperature actually gets hot enough in a compost pile that it sterilizes human waste.  There’s a great overview of these bacteria here.

If anaerobic bacteria are allowed to thrive though, then things get nasty.  They release ammonia-like substances which cause bad smells and gases.

In order for aerobic bacteria to thrive, composting toilets must: All pit latrines are essentially compost toilets: give it enough time and the waste will eventually be turned into a safe substance.

However, it is going to take a VERY long time for latrine waste to be turned into compost.  In fact, it takes so long that the sludge in pit latrines can contaminate ground water and become a public health risk.  This is why pit latrines usually need to be emptied when they are full and not just covered.

Each time you go #2 in a compost toilet, you will need to add a handful of carbon material (such peat moss or dry straw) to the chamber.  Then you use the agitator handle to rotate the chamber.  You can use a spray bottle with vinegar in it to clean the bowl of any waste which remained.

The contents of the compost toilet won’t be fully composted yet and thus not safe to dump in your yard.  You will have to place them in a compost bin to complete composting.

Alternatively, you can keep the waste in the chamber to cure.  Many people will let the chamber cure for about a year until putting it on their compost heap. Obviously, you will need multiple replacement chambers to use while the full chamber completes composting. 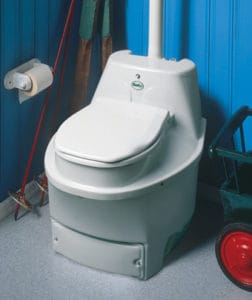 It is actually very easy to make a DIY composting toilet.  You essentially just need a bucket and a urine diverter (or a separate bucket for urinating into).  Each time you go #2 in the bucket, you put a bit of carbon material over the waste.   When it is full, you put it on your compost heap for curing.

The problem with these simple DIY composting toilets is that they don’t always create ideal conditions for composting.

For example, composting slows down drastically at temperatures less than 50F.  There’s not much you can do about this if your bathroom is in a bucket.  But some advanced portable composting toilets even have temperature sensors and regulators in them.  They keep the temperature set so composting occurs faster.

There are also many other features to love about commercial composting toilets, like:

These features make using a compost toilet nearly foolproof.  The only issue is that they can be very expensive (in the thousands of dollars).  Still, it’s a worthy investment if you are planning on going off-grid or prepping for disasters.  You can check out our reviews of the best composting toilets here.

If you are really interested in learning the science behind composting toilets, I recommend getting The Humanure Handbook: A Guide to Composting Human Manure.  It’s a great read, very informative, and will give you the confidence to start using  your own composting toilet.