The 3 Methods of Curing Meat with Salt

Curing is a process where moisture is drawn out of food through osmosis.  It is one of the oldest methods of preserving food – especially meat.  When properly done, cured meats have an indefinite shelf life. However, curing meat does have a very high learning curve and must be done with care. 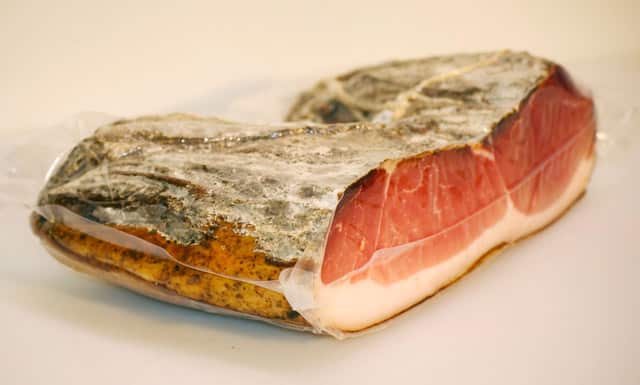 When you put salt on a food, it will draw water out of the food’s cells.  Because the cells become so dry, harmful bacteria are unable to grow there.

Further, the salt makes an acidic environment that harmful bacteria cannot survive in.  Helpful bacteria like Lactobacillus are able to survive, and this helps protect the food even further.

Often, sugar is also added to the salt during the curing process. The sugar helps preserve the meat by feeding the helpful Lactobacillus bacteria which in turn keep harmful bacteria levels in check.

Honey, corn syrup, and maple syrup also work like sugar for curing.  With the exception of bacon, the sugar doesn’t add any flavor.  Rather, it balances out the intense flavor of the salt.

Cured meat can last for months or even years, provided that it is hung up to dry somewhere with low-humidity.

However, because the risks of food poisoning are so severe, you shouldn’t rely on salt curing alone to preserve meat.

After curing the meat, it should either be smoked or dehydrated.  These methods (when done properly) will dry out the meat enough that bacteria won’t grow.

The meat can (in theory) last indefinitely.  You will still have to take care to protect the meat against pests though.

What Type of Salt to Use?

There is a lot of confusion and conflicting advice about what type of salt to use for curing meat.  In the past, regular salt was used to cure meat. At some point (probably around the 1800s, according to this history lesson), people started adding saltpeter to their curing mixtures.

Saltpeter is a name for either potassium nitrate or sodium nitrate.  Contrary to common belief, saltpeter does not directly preserve food.  Rather, certain bacteria in food are resistant to salt.  They eat nitrates and then convert them into nitrite (NO3). A reaction then causes the nitrites to turn into nitric oxide (NO).

The nitric oxide then bonds with certain proteins in meat, causing them to turn pink and prevent oxidation.  In this way, NO can kill deadly botulism spores and preserve meat.

Note that saltpeter is meant to be used IN ADDITION TO SALT, not instead of salt.

Saltpeter used for curing today is typically called pink salt. The reason the salt is pink is because manufacturers add dye to it so you won’t confuse it with regular salt.  The pink dye doesn’t actually add color to the cured meat (it’s the curing process with nitrates that does that).

There are two types of pink salt:

Some recipes will also call for Morton Tender Quick, which is a combination of salt, sugar, and both sodium nitrate and sodium nitrite.  This isn’t dyed pink, so be careful to store it separately from your table salt.

*Curing salts are not interchangeable. Always use the type of salt called for in the curing recipe!

In large quantities, curing salt can be very toxic.  Don’t breathe it in and make sure not to rub your eyes.  Keep it away from children. However, they are perfectly safe to use in curing recipes so long as you stick to the recipe.

And what about the risk of cancer from nitrites?  Nitrites are actually commonly found in many foods.  You’ll get more nitrites from a serving of spinach than from an entire cured salami.

Botulism is a greater danger than nitrites in cured food.  So, follow the curing recipe and use the curing salt it calls for!

Ideally, you should use curing salt for preserving meat.  It simply does a better job of ensuring that botulism spores aren’t able to survive.   It is possible to cure meat with regular salt. However, there can be some issues.

The first issue is that table salt is iodized.  The iodine in the salt can impart a weird taste in the food.  Table salt also often has anti-clumping agents added to it.  This can make dry cures get lumpy or sediment to form in brine.

If you are going to cure with regular salt, you should look for non-iodized salt (again, follow the recipe!).

Note that the size of salt grains can vary.  This will affect how much salt there actually is in one unit of measurement.  For example:

Thus, 1 cup of table salt is not the same as 1 cup of kosher salt.  To make sure you are using the right amount of salt, you will need to weigh the salt on a scale instead of relying on measuring cups.

If you want to use regular salt for curing but still want nitrates for preserving, one solution is to use celery juice.  The celery juice contains natural nitrates which will work similarly to saltpeter in curing.  It’s not as effective as curing salt though, so do this at your own risk.

When you are just beginning, it’s best to follow recipes for curing instead of making up your own concoctions. So, don’t try to substitute celery juice for saltpeter in curing recipes.

Methods of Curing Food with Salt

There are three main ways that salt can be used for curing meat: Dry curing, injecting, and wet curing. However, wet curing is usually the safest to do at home. 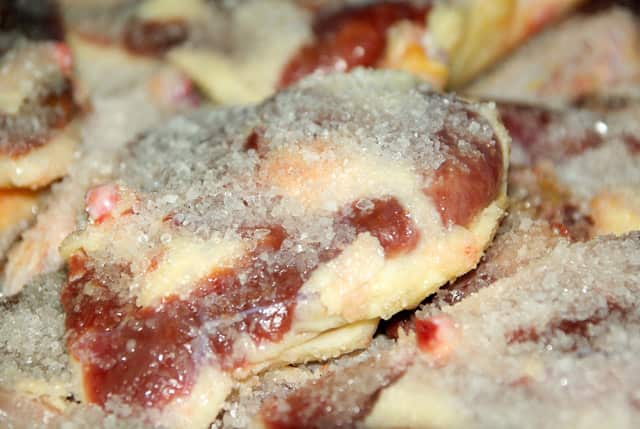 This method is best for ham, bacon, and small pieces of meat.  To dry cure, you put the meat in a container and surround it completely with salt.  The meat should be in a cold environment (such as your fridge) while dry curing.

If you can’t control the temperature and humidity, then dry curing is not safe to do. Thus, it generally isn’t recommended that you try dry curing at home unless you are a professional and have access to microscopes/analytical tools that can be used to check the safety of the meat.

Injecting involves using a syringe to inject a salty brine into the meat.  Unless you have access to professional tools though, it is very hard to get the brine evenly distributed throughout the meat. Thus, it generally isn’t recommended for DIY curing.

This is the best method if you are trying to cure small amounts of meat at home.  It involves soaking the meat in salty brine.  Meat already contains a lot of moisture, but the salt in the brine draws it out to create an equilibrium.

With wet curing, it is very easy to control the amount of salt that you use.  The brine will get throughout all of the meat without making “pockets” as can happen with injecting.

Wet curing should be done in a refrigerator.  It is important that meat stays submerged under the water during the entire process.  If it is exposed to the air, bacteria will quickly start to grow. Small cuts of meat can be wet cured in just a few days.  Large cuts of meat can take weeks to wet cure. The meat must be cooked before consumption.

How Much Salt to Use in a Brine?

The USDA recommends using one ounce of curing salt per quart of water. However, you can make a stronger brine if you like your meat very salty.

How to Know When Meat Is Finished Curing?

Curing is part art and part science.  There is no exact amount of time that the meat should be left to cure.  It depends on your personal tastes, the type of meat, the size/cut of the meat, and the strength of the cure.

However, here are some general guidelines to go by so you know how long curing will take.

You will know that the meat is cured if it reduces in weight by 35-40%.  Large cuts of meat could take weeks or even months to finish!

The only way to know if the dry cure is done is to weigh the meat. Use this formula:

It takes approximately 24 hours for the brine to soak into ½ inch of meat.  However, the type of meat, texture, and brine strength can all affect how long you need to cure the meat in a brine.

*Avoid stacking meat in brine.  If you stack two pieces of ½ inch meat, you’ve now got a 1-inch slab of meat.  It will take longer for the brine to get into the meat.

Here are some general guidelines:

If the meat hasn’t been cured long enough, the color will not be uniform throughout.  You don’t really have to worry about curing meat too long (assuming that you’ve kept the temperature at a safe level).  If the meat got cured too long and is too salty, you can always soak it in plain water to remove some of the saltiness.

Remember that cured meat should be treated as though it is raw meat.  To preserve meat with salt, you need to completely displace all of the water in the meat, so curing will take a lot longer!  Always play it safe and cook or smoke your meat after curing.

When in doubt, throw it out. It’s better to play it safe than sorry!

Do you cure your own meat? Let us know your tips in the comments below!