The 19 Types of Natural Disaster You Need to Know

What Are the 6 Main Categories of Natural Disasters?

Natural disasters can be divided into six categories:

There is a lot of crossover between these disaster types, though some might fit into multiple categories. For example, thunderstorms (meteorological disaster) can trigger landslides (geological disaster).

Also called geophysical hazards, these disasters originate from inside the earth or involve solid earth moving.  They often occur without warning, so there is no time to evacuate or take shelter.

Meteorological natural disasters are caused by short-term but extreme changes in weather conditions.  Luckily, there is usually advance warning and time to evacuate or take shelter before the disaster strikes.

Due to climate change, meteorological natural disasters are expected to increase frequency and strength in many parts of the world.

Climate natural disasters occur from lasting changes in atmospheric conditions.  Because these disasters are long-term, they can cause mass displacements of people.

It is essential to understand that these climate changes can also increase the frequency or intensity of other types of natural disasters, such as climate change contributing to hurricanes.

Biological natural disasters involve exposure to living organisms or the toxic substances they produce. They can cause disease and death in humans or animals or massive crop destruction.

Extraterrestrial natural disasters originate from outer space and then enter the earth’s atmosphere.

While it may seem like something out of a movie, extraterrestrial natural disasters are an omnipresent risk and could be catastrophic.  Unlike in the movies, there is usually little, or no advance warning before the disaster occurs.

What Are the Most Common Natural Disasters in the USA?

Flooding is the most common natural disaster in the United States. While it is more common in some areas, flooding occurs in all parts of the USA. A flooding event has occurred on average every 2-3 days in the USA for the past 25 years.  The frequency of floods is only increasing.

What Natural Disaster Causes the Most Damage in the US?

However, now the coronavirus pandemic has changed that.  It is estimated that the pandemic will cost more in 2020 alone than all of the world’s natural disasters of the past 20 years combined.

What Are the Deadliest Natural Disasters?

As of 2020, though, the coronavirus has become the deadliest natural disaster of modern times.

The earth is made up of numerous tectonic plates which are constantly moving. Pressure builds up at plate boundaries.  An earthquake occurs when this pressure is suddenly released as seismic energy. Earthquakes cause severe shaking and vibrating.

Earthquakes are responsible for most natural disaster deaths worldwide. Most of these deaths result from structural collapse: buildings falling on people.

Read: How to Prepare for an Earthquake 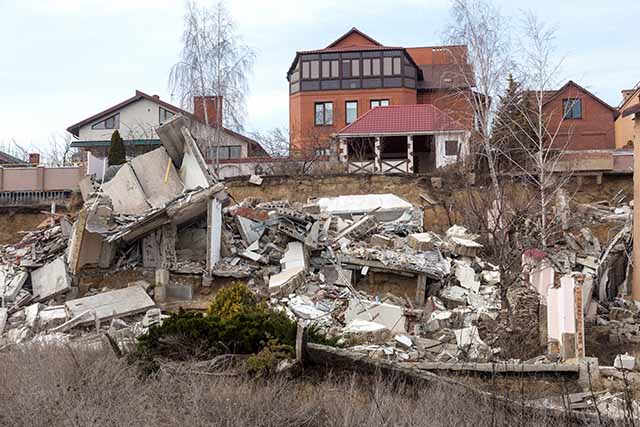 There are many active volcanoes worldwide, including 65 active volcanoes in the continental USA.  The most famous of these is Mount Saint Helen’s in Washington State.  It had a massive eruption in 1980 which killed 57 people.  Since then, it has had three more minor eruptions.

Volcanoes can cause damage in numerous ways.  Not only can they spew massive amounts of lava and rocks into the area, but they can trigger landslides or tsunamis.

The eruption can emit toxic gases like sulfur dioxide into the air.  Ash from the volcano can cause respiratory problems and disrupt air travel.  Because of this, a gas mask or respirator is an important piece of gear for volcano preparedness.  Read about gas masks and N95 masks.

Avalanches occur when a large mass of snow, ice, and debris falls down a slope. The avalanche can destroy whatever is in its path and bury people under the debris. Destruction of utility equipment can cause oil and gas leaks and widespread power and communication outages.

Extreme temperature disasters include heat waves, cold waves, and severe winters.  Extreme temperatures can cause death directly, such as hypothermia and heatstroke. For example, nearly 200 people died in the 2021 Pacific Northwest heatwave.

The region usually does not get high temperatures, so many people don’t have air conditioning or fans.

Extreme temperatures can cause many other problems too. Also, in 2021, the cold wave in Texas resulted in a massive power outage disaster because the grid wasn’t equipped to handle low temperatures.  Dozens of people died during the cold wave due to hypothermia, road accidents, and carbon monoxide poisoning.

Read: How to Prepare for a Heat Wave

The National Weather Service defines a blizzard as a severe snowstorm which has:

Approximately 400 people die from blizzards each year in the USA.  Many of these deaths are related to road accidents. Blizzard deaths also occur from falling tree limbs, heart attacks (such as when people shovel the vast amounts of snow), or carbon monoxide poisoning from improper generator use during blizzard power outages. 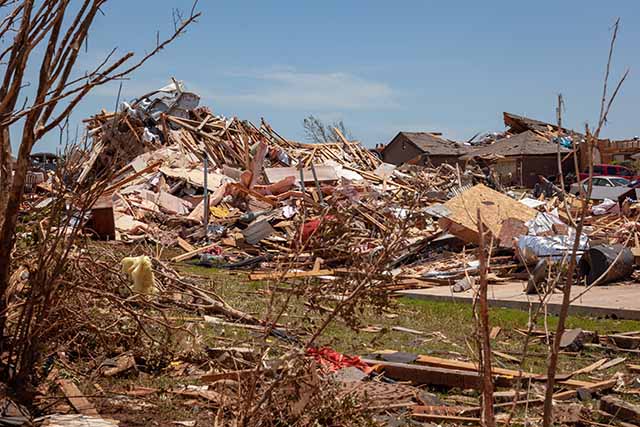 Hurricanes, also called typhoons and cyclones, are a type of tropical storm.

Hurricanes are divided into categories based on their wind speed. A category 5 hurricane has winds of at least 157 mph, strong enough to rip the roof off of buildings.

Hurricanes can also cause massive flooding and storm surges.  Of all of the weather-related disasters to hit the USA in the past 30 years, hurricanes have caused the most damage.

Tornadoes occur on every continent other than Antarctica, but they are most common in the United States.

The USA gets approximately 800 to 1,000 tornadoes every year, many of which are in “Tornado Alley.”  The high winds of a tornado can rip apart homes and buildings.  They lift debris like glass, causing it to turn into flying missiles which can injure or kill people.

Luckily, it is usually possible to get advance warning of tornadoes.  This gives you time to secure objects, get pets from outside and take shelter.

While most thunderstorms are not severe, they can rise to the status of natural disasters. The heavy winds can cause damage to buildings. In some cases, the thunderstorm turns into a derecho – a type of wind storm which is similar to a tornado but travels in a straight line. Lightning can cause fires, damage the electric grid and electrocute people.

Thunderstorms can also be particularly devastating to crops.  Heavy rains and hail can destroy crops, which in turn causes the price of food to increase.

Sandstorms and dust storms occur when strong winds pick up debris and blow it into the atmosphere.  The difference between a sandstorm and a dust storm is the size of the particles: sandstorms have larger particles than dust storms.

These types of storms occur in the desert and flat, dry regions.  For example, they are relatively common in Arizona and are the third leading cause of weather-related deaths in the state.

Because the storms reduce visibility, they can cause serious vehicle accidents – like the series of car crashes in 2021 in Utah that left 8 people dead. 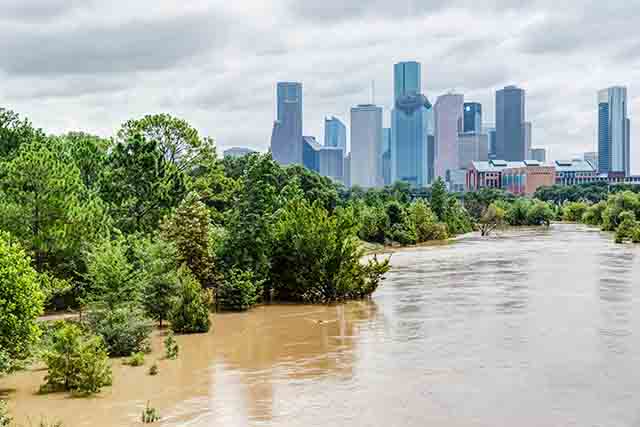 People caught in floods can be swept away by the rapidly-moving water. Vehicle accidents are also common during floods as it only takes six inches of water to make a car lose control, and a foot of water will float small vehicles.

Floodwater often mixes with sewage and other waste, which creates a sanitation nightmare and disease outbreaks. Mold grows easily in buildings that have been saturated by floodwater, and the buildings may need to be gutted to clean the damage.

A tsunami occurs when a massive amount of water is displaced, resulting in a massive wave that hits the shore.

Underwater earthquakes cause most tsunamis, but they can also be caused by landslides, volcanic eruptions, and other geological events.  Because of this, tsunamis are often categorized as geological natural disasters and not hydrological disasters.

Tsunami waves can easily get to over 100 feet in height. The largest recorded tsunami was in 1958 in Lituya Bay, Alaska.  Its wave was 1,700 feet high and destroyed five square miles of land.

Rogue waves are unusually large waves that can cause massive destruction. They are distinct from tsunamis because earthquakes or other geological causes don’t trigger them.

Instead, rogue waves seem to come out of nowhere. Rogue waves are particularly dangerous for boats and ships. However, they can also destroy coasts.

Because droughts change the soil, they can also lead to sandstorms and landslides.

Read: How to Capture Rainwater 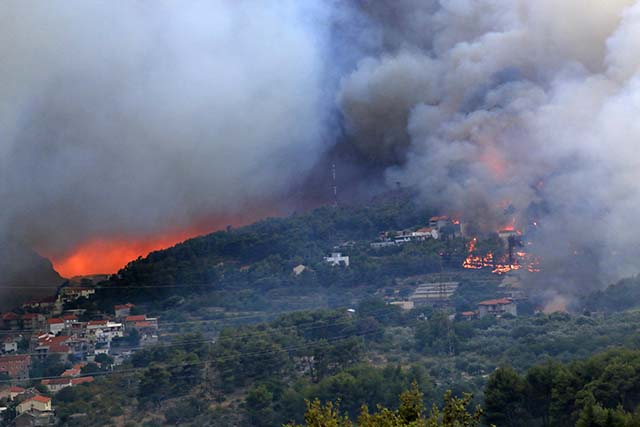 Wildfires are often caused by humans, such as people not putting out campfires properly or by lightning.  However, wildfires are increasingly occurring because of climate change.  Increased temperatures mean drier soil and forest debris, allowing wildfires to spark quickly and spread rapidly.

The past few years have seen a drastic increase in wildfire frequency and damage. It’s only likely to get worse.  Climatologists predict that wildfires will increase 14% by 2030 and 30% by 2050.

However, epidemics don’t just occur from viruses.  They can also occur from bacteria, parasites, fungi, or prions (infection agents).   Epidemics can also be vector-borne, such as Brazil’s 2015 Zika virus outbreak.

Climate change is causing changes in pest life cycles and behavior, allowing them to survive and reproduce.  The pests can consume entire crops, which can then cause famine and increased food prices.

Pest infestations can also lead to disease epidemics.  This happened during the Bubonic Plague when fleas on rats spread the bacteria, which killed an estimated 25 million people.  Diseases like malaria and Lyme disease are still being spread through pest infestations today.

Impact events are when asteroids, meteors, or other space objects hit the earth. Numerous events have occurred throughout the earth’s history, but the most devastating ones occurred millions or even billions of years ago.

This doesn’t mean that an impact event couldn’t occur again.  Because outer space is so vast, it is unlikely that we would even get much warning before an impact. For example, scientists only spotted the 10-foot wide asteroid which struck Iceland in March 2022, a mere two hours before impact.

Space debris can cause destruction even if it doesn’t hit the earth.  For example, an exploding comet within the earth’s atmosphere could trigger an airburst.

The energy unleashed from space storms can travel to earth and cause damage.  A solar flare is probably the most concerning of these space weather events.

A solar flare is essentially an explosion on the sun.  The explosion causes clouds of electrons, ions, and atoms to surge into space, resulting in radiation and solar wind storms.  It can trigger a geomagnetic storm, which could cause an electromagnetic pulse – EMP – to hit the earth.

The EMP by itself isn’t necessarily dangerous to humans.  However, an EMP could destroy electrical equipment.  Some predict that a major EMP event would take out the grid and leave us in darkness for decades. Since nearly everything from water treatment to supply chains relies on electricity, civilization could collapse.