The Best Emergency and Shortwave Radios for Preppers

When I was a kid, our emergency radio was an AM radio that my mom kept in the basement, along with some spare batteries. This radio was supposed to be our lifeline to the outside world should a major disaster strike.

Luckily, we never had to use that emergency radio in an actual disaster situation. Standard AM/FM radios are not meant to be used in an emergency. They simply don’t have enough range or the right features.

So, what emergency radio should you be using?

Making sense of all these emergency radio features can be incredibly confusing. To make it easier, here is my completely unbiased guide to the best emergency radios for your money.

I’ve selected a few great NOAA emergency radios and listed them below. But please remember that you will probably want a two-way radio in addition to the emergency radio you keep at home.

For example, you might keep your larger, more advanced emergency radio at home. A portable two-way radio would go in your Bug Out Bag and/or be kept in your vehicle. Midland is a well-known and respected brand in this space. The WR120 is one of the most popular, and it has many great features. It is meant to be used as a desktop radio, so don’t plan on packing this in a Bug Out Bag. However, it is fantastic as a reliable at-home model. You can put it on your bedside table and use it as a standard clock radio (it even has a wake-up alarm). I only wish it was more waterproof and rugged in design.

Note that it doesn’t have alternative power sources like a hand crank. So, you’ll need a solar charger for charging batteries when they die or a ton of spare batteries.

Check on Amazon
Check On Midland

This has long been one of the most popular products. It has many features to love: it’s compact enough to carry with you, it has a rugged design, it’s NOAA and Public Alert approved, and it can be charged multiple ways.

The MMR-88 does have an alert feature. Just note that it does not have S.A.M.E. alerts, so you can’t customize the alerts based on your geolocation or other preferences.

There is a battery that can be charged with solar, hand crank, or USB. You can also use the radio’s USB port as an output to charge other devices.

The Kaito KA500 is a mid-priced unit with lots of high-tech features. The best thing about the Kaito KA500 is its five different charging methods. The hand crank and solar panel perform well (better than you’d expect, actually). For every 5 minutes, it will give about 2% power to an iPhone 6 battery.

Yes, this is slow charging – but I think people have unrealistic expectations about how much energy you can generate from a simple hand crank or small solar panel.

As for charging the actual radio, it takes about 3 minutes of cranking to give 20 minutes of radio time. This isn’t great but is much better than most other mid-priced emergency radios offer.

The major downside of this emergency radio is that it has an analog tuner. It’s not something you think about until you have to scroll through lots of static to find a usable channel. The signal isn’t the best, so this can be a big annoyance.

This is another tabletop-type emergency radio. The difference between this one and the Midland is that the C. Crane model also picks up 2-meter ham radio signals. This means you won’t be able to communicate via ham (thus, don’t require a license) but will hear ham conversations.

The 2-meter ham band includes ham radio operators on the scene providing emergency assistance. So, you could be able to hear info before it makes it to the general public.

The other high-tech feature of the CCRadio 2E Enhanced is that it strengthens weak signals. You’ll get clearer audio from even distant signals.

Unfortunately, since it is meant to be a desktop radio, you won’t get features like a built-in flashlight or multiple charging methods. It’s also clunky and large, weighing 4lbs.

What Is an Emergency Radio?

Simply speaking, an emergency radio is a radio which allows you to get information during a disaster. They are often called NOAA radios, crank radios, or survival radios.

A basic AM/FM radio (like my mom used) can function in an emergency. However, an actual emergency radio will have features – like NOAA alerts, long-range, and alternative power sources – which make it more suitable for emergencies. 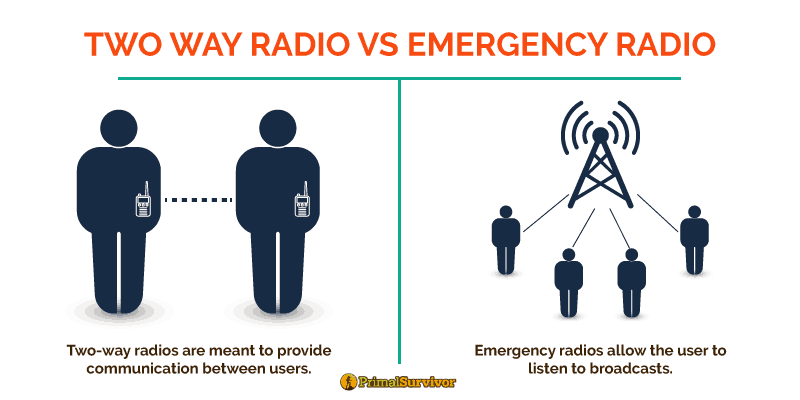 Emergency radios are different than two-way radios, such as ham radios.

Many good two-way radios can also pick up NOAA weather stations and be used as emergency radios. If you are interested in this type of radio, I suggest you read our post about the best two-way radios. It covers the various types, such as G.M.R.S., C.B., M.U.R.S., F.R.S., and ham.

As the survival adage goes, “two is one, and one is none.”

What Features Should I Look for?

Today’s emergency radios come with all sorts of high-tech features. A lot of these, such as flashlights and sirens, are nice to have.

However, it comes down to a few key things that you MUST have:

NOAA stands for “National Oceanic and Atmospheric Administration.” It is part of the National Weather Service (N.W.S.). NOAA issues warnings to the public about emergencies.

The frequencies that NOAA broadcasts on are:

To find out the broadcasting frequency of your local area (in the U.S.A. or Canada), see the NOAA station listings webpage.

In addition to broadcasting alerts about weather-related disasters, NOAA issues alerts for:

Only buy an emergency radio with the NOAA label!

Alternatively, you can look for an emergency radio with the “Public Alert” label. These radios also get NOAA frequencies.   Some even carry both labels.

For emergencies like hurricanes, we usually get warned on the news days (if not weeks) before the disaster hits.

Recommended Reading: How To Survive a Hurricane

But what about emergencies that come without warning? This is where the “alarm tone” feature of emergency radios comes in.

There are also emergency radios which have alarm features for disabled people. Instead of a sound alarm, they might vibrate or use a visual signal like a flashing light.

Note: The NWS does not issue email or SMS alerts. However, many third-party groups do deliver email/SMS alerts. Some are free whereas others require a fee. You can see a list of them here.

S.A.M.E. stands for “Specific Area Message Encoding.” This feature lets you custom-program your radio. You get to choose which alerts trigger the alarm to turn on.

Imagine that there’s an Amber alert issued at 4 am in the next county over. Sure, this is essential info to know…but you don’t necessarily want your emergency radio waking you at 4 am to tell you!

However, if there is a serious chemical spill in your county, you’d want to know this immediately so you don’t drink tainted tap water.

With the S.A.M.E. feature programmed, you’d only get relevant alerts.

If you plan on keeping your emergency radio on 24/7, then the S.A.M.E. feature is a must-have (in my humble opinion).

You’ll have to program the S.A.M.E. codes into your emergency radio. It is pretty easy to do. You can read more about What Is S.A.M.E. here at the NOAA website.

For what should be obvious reasons, the power source of your emergency radio matters. Luckily, there are now many options beyond just having some spare batteries. Here are some of the options:

Ideally, your emergency radio will have multiple power sources. If one source fails (like your batteries), you will have a backup.

I prefer a combo of wall charger with a USB charging option. Most USB emergency radios also can be used as an output to charge other devices.

Below is a breakdown of the pros/cons of each charging option.

There are a lot of tradeoffs that come with radio size. A small emergency radio is great for situations where you must flee, such as keeping it in your Bug Out Bag. However, they usually lack features and may only have one power source.

Larger units tend to have more features and are built to be more durable, but you won’t be able to carry these with you.

My recommendation: Get a larger, more robust emergency radio to keep at home (preferably in your shelter-in-place location). Get a portable two-way radio to keep in your Bug out Bag.

Having a waterproof emergency radio is very important, especially if you live in a hurricane or flood zone.

The first number in an I.P. code is for how well it protects against solid items, such as dust or insects. This number should be a 6, which is the maximum protection and means the radio will keep out dust/dirt.

The second number indicates how well it holds up against liquids.

What I.P. rating should you get?

I would recommend getting an I.P. rating of at least IP63. Ideally, you’d get a radio with an IP67 rating.

Unfortunately, most emergency radios don’t test waterproofness, so they don’t have an official I.P. rating. If your home were flooded and you accidentally dropped it in the water, it might stop working.

Generally, two-way radios have I.P. ratings (this is because they are often meant to be used outdoors, such as when hunting or camping).

Again, this is why it is wise to have both an NOAA emergency radio and a two-way radio which can pick up NOAA broadcasts.

Some products come with extra features. Some might seem excessive or gimmicky, but they could also be helpful in a disaster.

Here are some that are certainly not essential but are worth considering.

Do you have an emergency radio yet? Which one? Let us know in the comments.