The Best Taser and Stun Gun Flashlights For Protection and Illumination

Many people carry electroshock weapons in the form of tasers or stun guns in the hopes that they’ll be able to protect themselves should they be threatened.

Most of the time, that stun gun languishes in the bottom of your bag, taking up space and proving about as useful as an empty tin of beans. Despite that, sales are soaring, and stun guns are fast becoming “part of the national zeitgeist.”

If the survivalist in you balks at the idea of hauling around something you hardly ever use, why not invest in a dual-purpose stun gun flashlight instead?

Twice as useful as any other self-defense weapon, these handy gadgets will light up dark nights and stop assailants in their tracks.

Better still, they won’t accidentally incapacitate you should the wind suddenly change direction as pepper spray might. 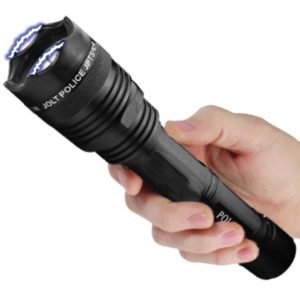 This innocent-looking stun gun flashlight can deliver a powerful 1.6 micro-coulomb shock. It also has a 120-lumen flashlight that will dazzle all but the most persistent assailants.Check On Amazon

It’s shocking how powerful this stun gun flashlight actually is! Capable of delivering 95m volts, it packs a lot of power for a 9.5-inch long weapon.

The 200-lumen flashlight will light your way on the darkest of nights and potentially blind, or at least disorientate any aggressor. If that’s not enough to deter them, switch on the stun feature and make your intentions clear with an incapacitating electric shock. 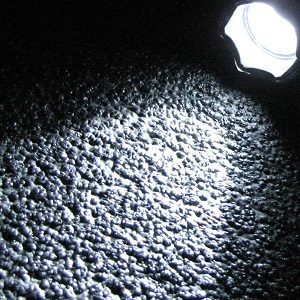 Its military-grade aluminum exterior makes it fully shockproof, while the built-in safety features ensure you don’t accidentally shock yourself.

This affordable yet durable stun gun flashlight comes with a heavy-duty belt clip, so you can carry it and access it easily. The rechargeable battery and cord fit into any standard wall outlet, so you can keep it charged and ready at all times. At just under one pound, it won’t weigh you down either.

If you see a suspicious person approaching you, switch the flashlight to strobe and see if the 200 lumen light doesn’t deter them. If that fails, switch on the stun gun and let the 95-decibel zapping sound do its duty. At that volume, it should discourage the attacker and get the attention of anyone passing by.

Once your assailant’s close enough to touch, you can use the pain-inducing stun gun feature to deliver a hefty 1.60 µC charge, after which your attacker will be in too much to think about anything else – least of all you.

Not only is this stun gun flashlight compact and affordable, but it also comes with some free training videos that will show you how to use it effectively and safely.
Check On Amazon 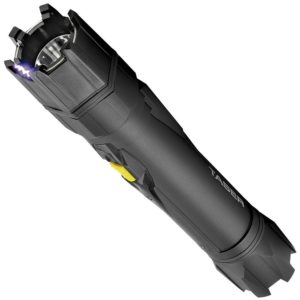 With just two activation buttons, this stun gun flashlight from Taser® is both easy and safe to use.

Turn on the light by sliding the top switch forward. Once this is on, press the bottom trigger to activate the stun gun. When in contact with an attacker, it will produce three arcs of electrical power, but it has enough other features that your attacker may well retreat long before you get to that point.

Switch the stun gun feature on when someone’s approaching you, and it will produce a loud crackling noise and an arc of visible, electrical light. That alone should be deterrent enough in most situations. 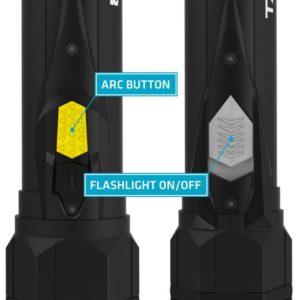 Designed to last, the Strikelight is made of durable but lightweight aluminum and has an anti-roll design, so it won’t break if it’s knocked out of your hands. It’s also rechargeable and, on a full charge, can deliver 100 stun discharges or provide five hours of continuous light.

Although the Strikelight weighs double that of the SABRE compact stun gun flashlight if you’re used to carrying around a 20lb backpack, you won’t notice the extra 0.6lb. 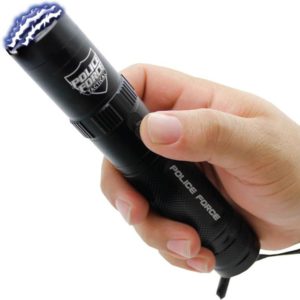 This stun gun flashlight measures just 6.5” in length but combines a military-grade flashlight with Triple Stun Technology to create an effective self-defense weapon.

The Triple Stun Technology creates a loud electrical burst that illuminates the top of the flashlight, making it look as intimidating as it is. It also has an impressively bright flashlight and long bulb life. 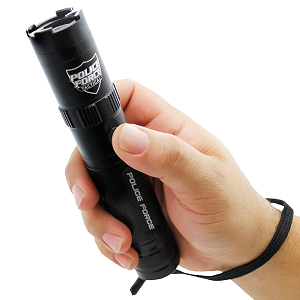 Easily rechargeable, this compact weapon has a shockproof exterior to improve reliability and extend its lifespan.

It’s a little more expensive than some of our other choices, and I’m not convinced it’s worth it. If you’re going to spend a few dollars extra, I’d recommend investing in the JOLT police stun gun instead. 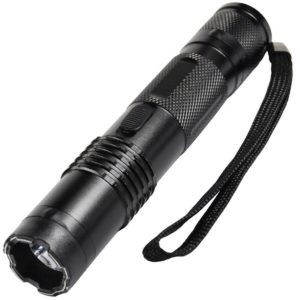 This sleek little weapon is one of the few stun gun flashlights to come with a wrist strap, so you can carry it easily and minimize the chances of it being knocked out of your hands. At 5.8” long and 1” wide, it’s also small enough to slip into your pocket.

Don’t let the size deceive you, though. Just one second of electrical shock from this little gadget’s stun gun, and your attacker will be experiencing severe enough muscle contractors to stop him in his tracks. Keep it up for a couple more seconds, and he’ll be disoriented and off-balance, giving you the upper hand. 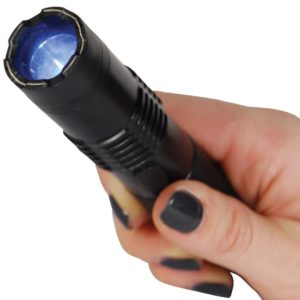 The 120-lumen flashlight is one of the brightest you’ll find on a dual-purpose stun gun flashlight, and the aircraft-grade aluminum also ensures you have a durable and reliable weapon close at hand. It also comes with a lifetime limited warranty. 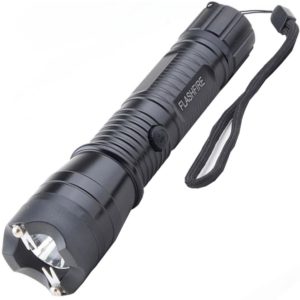 This lightweight self-defense weapon looks just like a regular flashlight, which gives you the element of surprise. An attacker may be undeterred by the ultra-bright LED flashlight, but he’ll probably take notice of the crackling sparks flying between the forked prongs at the head of the device.

If that isn’t enough, he’ll soon be close enough that you can deliver the final blow in the form of a powerful electric shock. 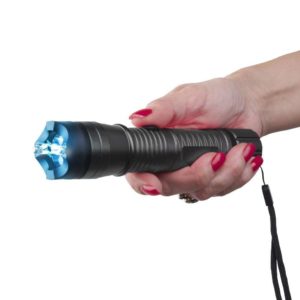 Equipped with a safety switch to prevent accidental discharge, this aluminum-crafted weapon is designed to last.

There’s much to like about this stun gun flashlight – it’s small enough to fit in a pocket, has a built-in Li-Ion rechargeable battery, and weighs just 0.35 lb. It’s also a couple of dollars cheaper than our number-one pick. 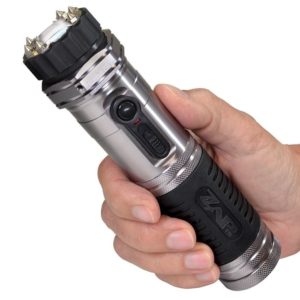 This powerful stun gun flashlight boasts six LED lights and six electrical probes. The lights are bright enough to illuminate your way even if there’s no natural light available, and the sharp electrical spikes will drive your point home. 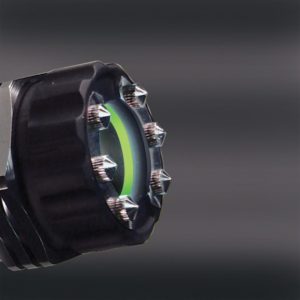 While the ZAP stun gun flashlight can be fully recharged in four hours, that charge isn’t as powerful or as long-lasting as some of the other models. Instead of getting five hours of continuous light, as you would from the Taser® Strikelight, you’ll get just four; instead of 100 stuns, you’ll be limited to 30.

While that’s sufficient, it’s not as impressive as its price tag suggests.

What To Look For When Buying A Taser Flashlight

A stun gun requires very little training or know-how to operate it, unlike other self-defense weapons. That means you have a much better chance of using it effectively and keeping any potential assailants at bay.

You can shine the powerful flashlight into an attacker’s face to try and deter them before even engaging the stun gun mechanism. Once you do, the crackling noise it makes might be all that’s needed to make an attacker think twice. If he persists, you can quickly incapacitate him with a painful electric shock.

One of the advantages of a stun gun flashlight is that it’s almost impossible to accidentally discharge the device.

Most attacks are close range, and a stun gun provides excellent protection against these. As you need to touch the prongs of the stun gun to your assailant to operate it, you want your target close by, even though you’re wishing they were somewhere else entirely.

This makes them one of the most effective self-defense weapons for women.

Also, see our guide to the best stun guns for women.

Before you spend your hard-earned cash on a stun gun flashlight, make sure you’re familiar with any legal restrictions that may apply in your state.

Until recently, it was illegal for people in Rhode Island and Hawaii to purchase or carry a stun gun.

Hawaii just introduced a new law, however, making these self-defense weapons legal, although you’ll still need to complete a background check and receive training when you make your purchase.

Stun guns are legal in most states, apart from Rhode Island, but some have certain restrictions or requirements you need to adhere to. In North Carolina, for instance, it’s illegal to carry a concealed stun gun outside of your own home. In Illinois, Indiana, Michigan, and Wisconsin, you need a permit if you want to own a stun gun, even if you mainly use it as a flashlight.

To be effective, however, you need a stun gun flashlight to have the following features:

A good flashlight is a handy self-defense weapon in itself. It deters potential attackers, can be shone in their eyes to disorientate them, and can even be used to strike out at them.

The best stun gun flashlight, therefore, should be strong enough to use as a self-defense baton, but not so heavy that carrying it around wears you out.

Also see our guide to the best stun gun batons.

Look for a flashlight stun gun with at least 100 lumens of power. This is enough to affect your attacker but not enough to stop them in their tracks.

With its 180-lumen strobe option, the Jolt Lightning Rod Stun Flashlight will do a better job of impeding your attacker, but the Jolt Rechargeable Police Stun Gun Flashlight, with its 200 lumens of power, will have an even longer-lasting effect.

The Power to Harm

You don’t want your stun gun flashlight to tickle your assailant – you want it to be so painful it takes his breath away.

According to a special report from the National Institute of Justice,

This has become the standard for most stun gun flashlights, although you will occasionally find one that’s even more powerful.

The SABRE Compact sends out 1.6 micro-coulombs. Not only will this cause considerable pain, but it emits such a loud sound when activated (95 decibels) that it will probably frighten off your attacker before you get a chance to use it.

A heavy-duty option is ideal if you want to use brute force to deter an assailant, but not so great if you don’t know how to use it.

If you’ve got small hands, you might find a large stun gun flashlight too unwieldy to handle. Not only that, but it will add so much extra weight to your bag that you’ll be tempted to leave it at home and go out defenseless.

The most effective taser flashlight is one that’s so comfortable to carry that you take it with you wherever you go.

If that means downscaling – do it. A small stun gun flashlight that’s always with you is a lot more effective than a heavy-duty one hanging on your coat stand.

Can you imagine anything worse than threatening an assailant with your stun gun flashlight, only to discover that the batteries are dead? The best stun gun flashlights can be easily plugged into a socket and recharged every day, so you never need to worry about having the power to protect yourself.

A good taser flashlight like the JOLT Rechargeable could change your life and potentially save it. There will be no more rummaging around in the dark looking for your house keys and no more avoiding dark streets for fear of what might be hiding in the shadows.

Armed with a stun gun flashlight, you can illuminate the darkest of corners, disorientate an opponent with bright, strobe lighting, and stop an attacker in his tracks with a powerful electric shock.