Can You Eat Pine Cones?

If you end up living in the wilderness for longer than a couple of days, you may need to forage food to survive or eke out whatever food supplies you’ve brought with you.

A pine forest may not be the first environment that springs to mind as a forager’s delight, but unbeknownst to many, these humble trees provide the knowledgeable prepper with many gifts.

Pine tree sap has many uses and can be used to make antiseptic salves, lamps, or soap; it can also be turned into pine pitch used for waterproofing items such as buckets or even boats.

Various parts of the tree can also be eaten, which may lead you to wonder if pine cones themselves are edible.

The answer is yes…. and no.

The Anatomy of a Pine Cone

Pine cones don’t exist solely to feed hungry hikers. Their primary purpose is to protect the pine tree’s developing seeds until they are ready to spread and germinate.

The scales on a pine cone open when the cone is small to allow pollen in before sealing back up again to protect the seeds from cold temperatures, wind, and animals. Once the seeds are mature and conditions are suitable for the seeds to germinate, the scales open up again to let the wind disperse the seeds inside.

When it comes to eating pine cones, the best part is the seeds, commonly known as pine nuts.

Which Parts of a Pine Cone Can You Eat?

Pine nuts have a mild flavor and are an excellent protein source, magnesium, vitamin K, and thiamine (B1). Only about 20 species of pine trees worldwide have nuts large enough to be worth harvesting.

In North America, the best species to look out for are:

August and September are the best months for harvesting pine nuts when the pine cones are just beginning to open.

If it’s later in the season, don’t despair. By laying out a tarp under some pine branches and shaking them hard, you may be able to shake out some of the remaining seeds that the local wildlife hasn’t eaten.

In spring, look out for the yellow pollen produced by the male pine cones. These look quite different from the green or brown hard-scaled female cones that you’re familiar with. Look out for a collection of yellow-brown tubes around a central stem. 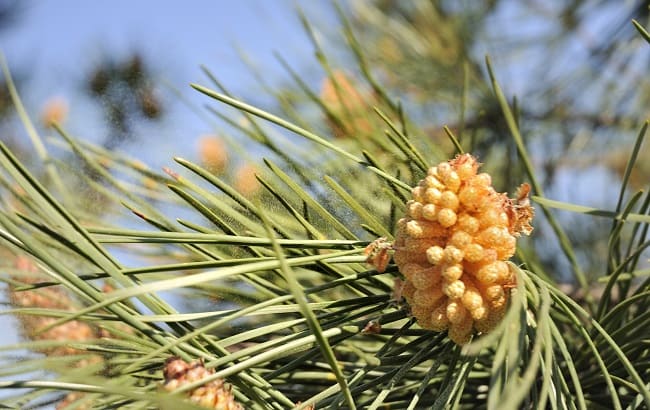 The pollen produced by male pine cones is an excellent source of protein. You can use it as a thickener in stews or mix it with flour. You can even use it to make pasta!

What About the Pine Cone Itself?

The shell of a pine cone isn’t going to be your first choice of food. However, if you’re desperate, you could eat younger cones before their scales have opened up and hardened.

They’re a good source of fiber and vitamin C, but they’re not particularly easy to digest and are not recommended as a long-term dietary option.

Boiling pine cones will soften them and make them easier to eat. If your only option is more mature, brittle cones, then you could try grinding them into flour.

However, there is a more palatable way to consume pine cones – if you have a good sugar supply. In Russia and Georgia, young, green pine cones are thought to have medicinal properties and are used to make jam, “honey”, tea or alcohol tincture.

How to Make Pine Cone Jam

Making pine cone jam is easy. First, collect edible pine cones in spring or early summer when they’re green and soft. For jam, you want cones that are 1-3 centimeters in length.

Wash the pine cones well, then place in a pot, cover with water and leave overnight. The next day, drain and capture the infused water and add one liter to a pan with the sugar. Bring to the boil and add the pine cones.

Simmer for about an hour and a half. The pine cones will begin to change to a reddish-brown color. When the jam is ready, the cones will be soft, and the jam will be dark crimson. Decant into prepared jars and store in a cool, dry place.

Most pine cones are not poisonous to humans; however, as with many foraging rules, there are always exceptions.

The following species are poisonous to animals and not generally recommended for human consumption:

You also need to bear in mind that not all conifers are pine trees. Although many people generically refer to all evergreen needled trees as “pine trees,” there are only about 120 species of pine worldwide.

Some parts of other coniferous trees are edible, but if you’re looking for pine nuts, you will only find them on pine trees.

What Else Can Pine Cones Be Used For?

Once you’ve harvested your pine nuts, don’t discard the cone. The dry, cracked scales of pine cones make excellent tinder for fires and, once the fire is lit, you can toss the whole cones on to keep it burning.

Pine cones aren’t the only edible parts of the pine tree. Pine needles make an excellent tea, and the inner layer of bark can also be eaten.