IFAK Contents: What Soldiers Have in their Individual First Aid Kits

A significant EMP disaster has just struck.  With the grid down, the masses are left without a way to resupply their food, no running water, and in a state of panic.

Chaos ensues, and, as predicted, the masses take to the streets to loot and riot. Anyone who gets in their way is likely to get shot, stabbed, or trampled to death.  If the hospitals are still operating, there will be so much chaos that it would take a miracle to see a real doctor…

What do you do?

Let’s hope that a situation like this never happens to you (though the people of Bosnia, Syria, Georgia, Somalia, and so forth will quickly tell you how quickly things can go from “normal” to SHTF).

But, if the S really does HTF, your standard first aid kit meant to treat scrapes and scratches is NOT going to cut it!

This is where an IFAK comes into play.

IFAK stands for Individual First Aid Kit, and the military issues them to soldiers going into battle.

Even though the IFAK contents vary depending on the military branch (Army, Marine Corps, US Air Force…) and where the soldier is being deployed (Iraq, Afghanistan…), they all cover the same most common deadly injuries. 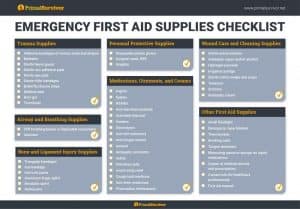 Get organized fast with our completely free checklist.
Download Checklist

In the past few years, it has somehow become cool to wear a bunch of camo, buy Army surplus gear, and flaunt it around to show what a [email protected]$$ you are.

Let’s be clear here: There is nothing “cool” about carrying an IFAK around with you unless we are talking about how “cool” it is to be responsible.

An IFAK will be completely useless for more than 99% of what people mostly have to deal with.

An IFAK is not going to treat a boo-boo.

An IFAK won’t help your migraine go away.

An IFAK won’t protect your feet from blisters…

Remember, IFAK contents are chosen to treat the most common deadly injuries in battle.  Those injuries are:

When might you need to worry about Deadly Hemorrhaging or Inadequate Airways?

Here’s just a few that I can think of off the top of my head.

The Army, Marines, and Air Force all issue IFAK, and the contents are different in each.

The Army has also updated its IFAK kits a couple times.

Military from other countries also issue IFAK kits too, and those IFAK contents might not match what the USA gives out.

Here are the latest versions of the Army, Air Force, and Marine Corp IFAK contents. 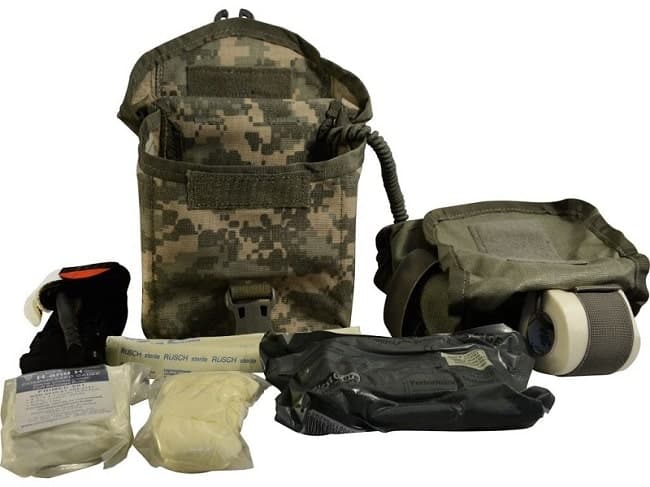 In the US Army case, “IFAK” stands for “Improved First Aid Kit.” That Improved FAK was issued in 2006.

In 2014, the Army updated it to the IFAK II by adding several more items. (all links go to product on Amazon)

The US Air Force IFAK focuses on wound management.  The entire IFAK contents with the bag weigh 1.6 pounds.  It includes: 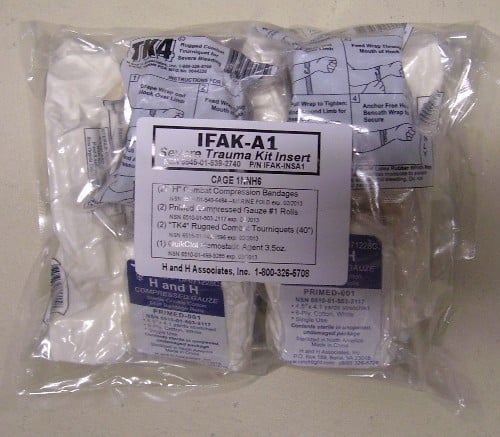 Should You Buy an IFAK?

You can buy military IFAK kits online at a lot of stores.  Be warned that they are relatively pricey (sometimes over $100).  The contents might also be EXPIRED!

Rather than wasting your money on a pricy IFAK kit just because it happens to be the same one issued by the military, why not just build your own?

You’ll have a lot more room to add the items you need for everyday injuries and disasters, so you’ll be prepared for everything and not just the worst-case scenarios.

But that’s just my take on it.  What do you think about buying Military IFAK kits?