7 Mostly-Great Options for an Off-Grid Refrigerator

Those of you old enough to remember the TV show The Honeymooners, may also recall their ice box, which (spoiler alert!) is on this list.

But if storing your food next to a block of ice isn’t appealing, I’ve got six other refrigeration options for off-grid living. One of which is certain to be a perfect fit.

Refrigeration as a modern day convenience

The first home refrigerator was invented in 1913, though it was another 10 years before Frigidaire invented a self-contained unit. And it wasn’t until 1940 when the fridge/freezer combination we’re used to today was invented.

The problem is, a typical American refrigerator isn’t going to work well off-grid.  Which is exactly why I put together this roundup. And also why I’m starting off with these important factors to keep in mind.

There is one other thing I’d like to point out first: Even though we Americans refrigerate nearly everything, this doesn’t mean that everything actually needs to be refrigerated. See here for 100 foods that don’t require refrigeration.

Solving that riddle will no doubt reduce your refrigeration needs.

Also, we’ll be listing the easiest, cheapest, and least technologically-reliant first, and moving toward more conventional and convenient options. 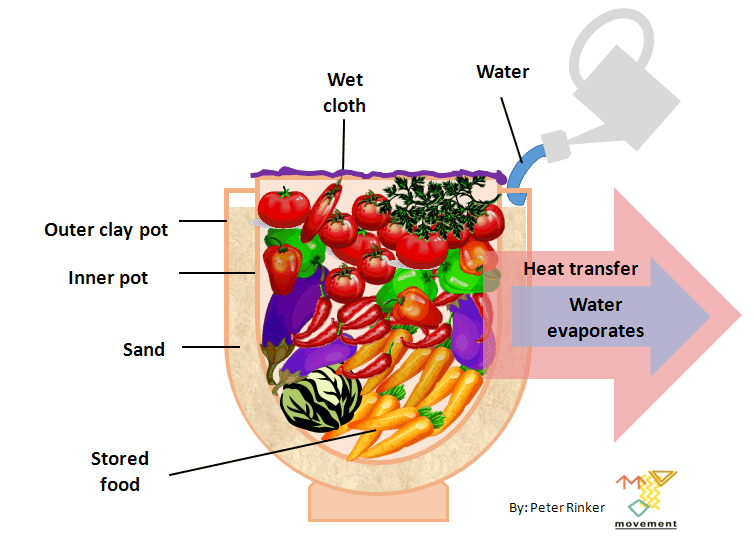 A zeer pot is an evaporative cooler that was invented in the 1990s in Nigeria by Mohammed Bah Abba, though there is evidence of this style of  refrigeration going back a couple thousand years to ancient Egypt.

The mechanics of it are simple:

As the water evaporates (by the wind, not the sun; this is important.) it chills the pot.

It essentially uses the water as refrigerant. As the sand dries out, you’ll need to keep adding more water.

Don’t expect your zeer pot to get as cold as a refrigerator. Though if your climate is dry, and the area is windy, temps can get as low as 40 degrees Fahrenheit.

Zeer pots don’t work as well in really humid areas. And they will go through water quickly in drier climates. Expect to add water to the sand about three times each day. And also expect to use as much as two gallons of water per day.

Which leads us to …

You’ll have to decide which resource you have more of or want to conserve more. Those of you living in a desert may not find this water consumption worth it, while others with easy access to water may feel differently.

For those of you interested in putting together your own, here are some instructions for building the Cadillac of zeer pots.

The one advantage with coolers is they’re easy. There’s nothing to build; just buy it, and you’re ready to go.

However, there are a few disadvantages.

Depending on your climate, and the quality of cooler you have, you may be getting ice frequently. And this source of ice will not be cheap, and it may not be close. ( Unless you have an ice house, more on this later.)

If you go with a high-quality cooler, like the Yeti brand, (Amazon Link) then you’re ice will last longer, but you’re also going to pay a few hundred dollars for your cooler.

And then there’s the issue of soggy food. Because even with your best laid plans, intentions, and organization, water has a way of getting things wet. Wet hot dogs – not a big deal. Wet cheese – well, that’s just disgusting. 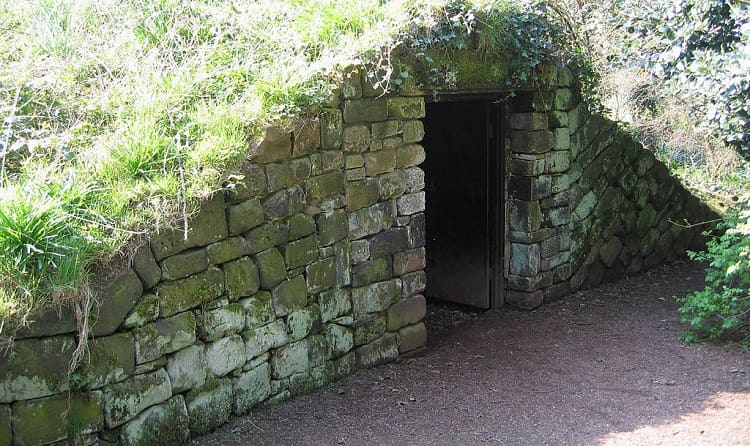 An ice house is simply a building used to store ice. It can be above ground, below ground, or partially-below ground.

Keeping your ice below ground will obviously keep it colder, like a root cellar, which will help you maintain your supply through the summer.

If you’re storing your ice above ground, you may want to insulate it. Sawdust and straw are both commonly-used insulators.

Just like you nested two pots together for the zeer pot, you can nest two structures together. Then pack the space in between with your insulator of choice.

While storing the ice is pretty straightforward and easy, harvesting your ice isn’t. You’ll be cutting it from frozen lakes and rivers using a power saw or a machine specifically built to harvest ice.

The video below shows a bit more how that’s done, its a fascinating process.

This refrigeration idea is obviously location-dependent, it’s also quite intensive, and maybe even a bit risky. So factor that into your decision. 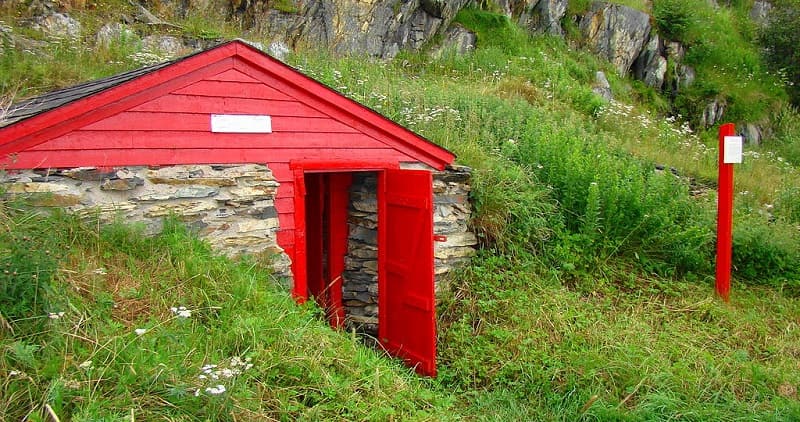 Root cellars are fantastic options even in conjunction with another main source of refrigeration. There’s nothing like the security of having a backup supply of food on hand, just in case.

Historically, root cellars were used to keep root vegetables fresh through the winter. However, besides storing the summer’s harvest in whole-food form, you can also store canned and preserved food that you prepared from that harvest.

The Farmer’s Almanac states that at 10 feet below ground you’ll find what you most need in any root cellar – temperature stability.

Which means you’ll be able to keep foods warmer in the winter, and cooler in the summer.

Any type of structure that provides the natural insulation of the earth will work, such as

Remember our zeer pot. You can do the same thing with a garbage can. Dig the hole a little wider than the can, and deep enough so that the lid is just a few inches above ground. And then insulate the gap between earth and can with mulch or straw.

There are five things any root cellar needs to function properly:

Read this in-depth guide If you’re interested in learning more about root cellars.

Propane works great for heating, as in water heaters, stoves, ovens, and home heaters. And they’re popular in RVs. Though people who have RVs aren’t generally using them in cold climates. The whole point is to move with the good weather.

You may be wondering, what does that have to do with anything?

Well, most propane refrigerators must be vented,which means busting through the exterior of your home and putting in vents. So when the weather turns nasty, as it tends to do in winter, you’ve got cold air venting into your house. But that’s not the worst part, as Ethan Waldman discovered.

Ethan, who lives in a cold climate, discovered that propane refrigerators don’t work very well when temperatures drop to the degree that they do way up north.

And without getting too technical (you can follow the link above for the technical), the absence of heat caused everything in his fridge to freeze.

The best that can be said for propane-powered refrigeration is that it’s a cheaper, out-of-box solution than a solar-powered fridge.

There’s not much in the way of initial set-up, except for those vents. And that lack of infrastructure may be appealing to some.

This one has some good reviews and may be worth investigating further:

A 10 cubic foot refrigerator will use about .35 gallons of propane per day. If propane costs $5 per gallon, this means you spend around $50 per month. Over the course of one year, that’s $600, and over the course of 10 years, it’s $6000. That kind of money is more than adequate to cover a hefty solar set-up.

But even then, there are other issues, such as …

For a lot of folks, moving off the grid is as much about independence as anything else.

Do you want to have to rely on a source of power you have absolutely no control over?

Yes, you can’t control the sun, or the wind, but when the sun stops shining, none of us will have to worry about anything ever again.

Any refrigerator will run on solar energy provided you have an inverter – which converts DC battery power to 120 volt AC power – and enough energy to get it running, and keep it running. Or you could just buy a solar powered refrigerator.

A solar-powered fridge will cost you more upfront. But you’ll eliminate the need for an inverter — though you may need one for other appliances anyway. And it’ll require a lot less energy, which means fewer batteries and solar panels.

Note: Two things to keep in mind if going with a solar refrigerator. A one-degree difference in temperature can mean a 5% difference in energy consumption. So get a fridge with a thermostat that you can control.

The other thing that contributes to energy efficiency is the style of the refrigerator.

The most efficient fridge/freezer combo is when the freezer is on top. Cold air is heavy, so with that style the cold air naturally falls into the refrigerator chamber without the use of fans or pumps.

When the freezer is on the bottom, it requires more energy to push that cold air upward. The other type, the side-by-side fridge/freezer, is also not as efficient.

A solar powered refrigerator is a significant investment to be sure. However, unlike regular refrigerators, they’ll require much less hardware to operate. And when compared with propane refrigerators, they’re cheaper. Plus, you have the added bonus of never having to worry about the cost of propane going crazy, or even one day disappearing.

But if cost is an issue, and you still want something convenient and energy efficient, well, number seven on our list may be the perfect solution you’ve been looking for.

Tom Chalko, an Australian inventor, was the first person to come up with this, it seems. Who can be sure?

His dream is to live a near-zero emission life, and this fairly-simple and cheap conversion gets him pretty close. Ever heard of having your cake and eating it, too? This is it!

Once you have the few parts you need – an external thermostat, a temp sensor (thermistor), and a few smaller parts – it takes only about a half hour to convert the chest freezer into a super-efficient refrigerator.

And remember that fun fact from above, about how cold air is heavy? In a chest freezer, when you open the door, that cold air doesn’t feel the need to escape.

Tom found that his new refrigerator, which operated in the range of 40 – 45 degrees, used the same amount of energy in 24 hours as a 100 watt lightbulb uses in just one hour. How’s that for amazing?

If interested in doing a chest freezer conversion yourself, check out the video below. It’s easy enough that anyone can do it. And so efficient that everyone should be doing it.

The one tip I repeatedly came upon during the research for this article was this: Use what nature already provides. Work with it, not against it, and you’ll be well on your way to off-grid living success.

So while propane refrigerators may not make sense for those of you in the Upper Peninsula of Michigan, an ice house just might. While those of you in the southwest, who get upwards of 320 sunny days each year, will likely find solar a reliable resource.

And all of us, once you get 10 feet below ground, can make use of the earth’s consistent, year-round temps to store food.