Skip to content
Disclosure: When you buy through links on our site we may earn a commission. This product was provided by the company for review purposes. Learn more.

The Trucker’s Friend hammer axe is a handy and durable multi-tool.

It fits eight functions into one convenient and easy-to-carry item, and it’s even backed by a lifetime guarantee.

But does the Trucker’s Friend really live up to the hype?

Primal Rating: 4 (out of 5)Check On Amazon 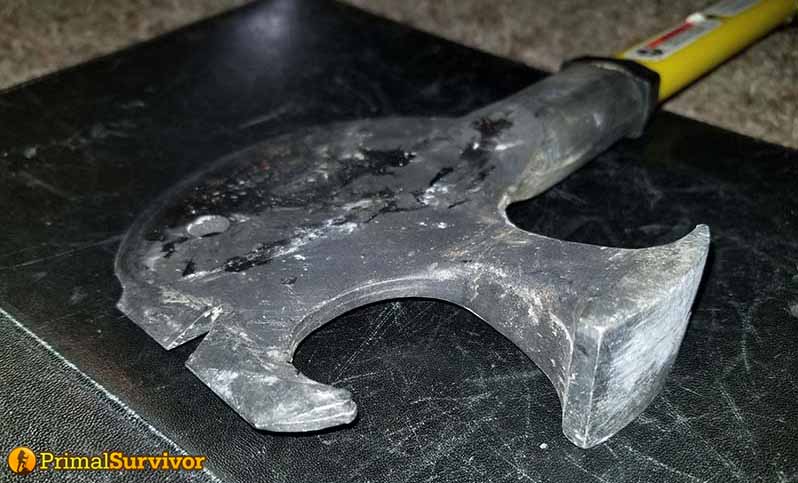 One of the first assessments I like to administer for new purchases is a durability check. If a tool can’t handle some abuse in the line of duty, is it really worth purchasing? Not in my book, it ain’t!

As soon as this hefty tool arrived I gave it a good toss into a pile of gravel and loose stone. Besides a few cosmetic nicks and scratches, it survived the initial test. Good on the Trucker’s Friend.

The business end on the Trucker’s Friend is made from carbon steel, and boy is it durable. I’m pretty sure I heard it laughing at me as I beat it up and went through all of my tests.

While I prefer a natural steel finish to my gear, the Friend has a no-nonsense black finish that makes me think twice. While mostly a cosmetic consideration, the blackened steel is also good for eliminating glare during use, and it could be helpful for avoiding detection if the blade is exposed but you don’t want to be.

Unfortunately that nicely hued head is offset by a yellow Nupla fiberglass handle. It’s pretty good for fiberglass, as good as you can get, but it’s still fiberglass. In my opinion, that’s a serious drawback of the Trucker’s Friend. I’d have preferred a wood handle, or a full tang style build.

That said the rubber handle on fiberglass shaft seems potentially helpful if you’re breaking into a wall and hit electric wiring. That bit of insulation could save you from a serious injury! 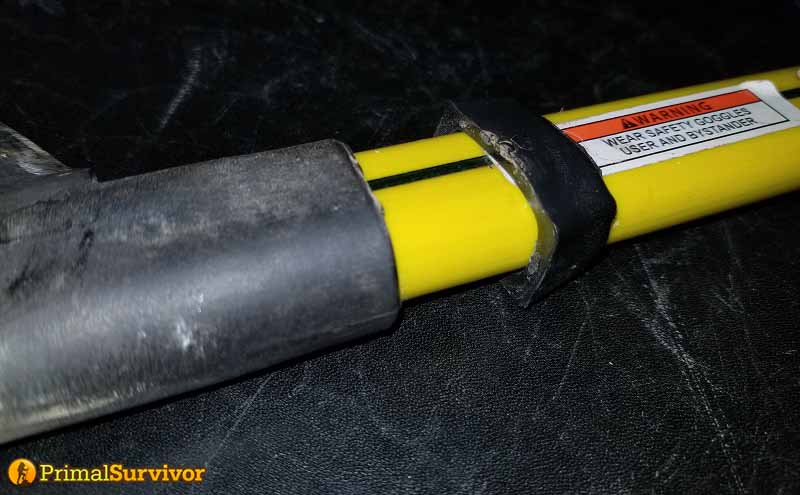 This is largely a personal preference, but I simply dislike the weight, feel, and look of fiberglass. The Trucker’s Friend’s handle is made from the best fiberglass available, and it really is stronger, sturdier, and lighter to wield.

You can also leave this tool outdoors without fear of the handle becoming damaged like would happen to a wood handle, and if you knick the handle it’s a minor problem for fiberglass but potentially fatal for wood.

The Friend also features a heavy-duty and contoured rubber handle for a sturdy grip (more on that grip later!).

So that’s a lot of good for the Trucker’s Friend’s fiberglass handle, it really is… but I still don’t like it, and here’s why.

This tool is among the most unwieldy I’ve ever used. The head of the Friend is incredibly heavy compared to the molded rubber handle. I popped in a few nails using the claw hammer but realized very quickly that I had to adjust my grip to do this safely. It also bent some of the nails I tried driving in.

That heavy head is great for chopping, but I’d never use this tool to actually split or chop firewood. Again, it’s too unwieldy for this kind of work.

However, it is great at smashing through plywood.

What I used here was a throwaway piece of plywood from a jobsite. It was wet and not secured in place like it would be in a house, but the Friend still smashed through the bouncing wood with zero hesitation.

But for any sort of delicate work, or any effort when accuracy is needed, I would seriously reconsider using the Trucker’s Friend. With extra caution and a modified grip, it can drive home nails, but if I had the option I’d grab a real hammer or hatchet first.

The awkward balancing makes this tool simply weird to handle. 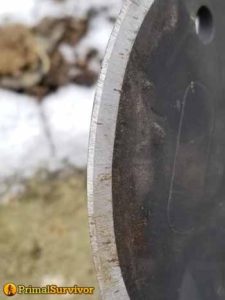 The first appeal I saw to the Trucker’s Friend was the axe blade it sports. Immediately I had visions of carrying this tool to work and into the field as a replacement for my trusty Estwing axe, but those visions were quickly dispelled when I put this it to work.

A nice and rounded blade sure looks nice, but it skipped a lot during use while attempting to cut through a fallen tree limb.

If I’m using an axe or hatchet in the field, I need to know it will perform its duties well. Chopping firewood is only one task; in a survival scenario impromptu bushcraft and construction projects (a shelter, for example) are likely to be encountered.

I wouldn’t trust the axe on the Trucker’s Friend as my tool of choice for any of these projects. It’s a blade very good at smashing and whacking into obstacles where finesse isn’t required, but that’s about it. 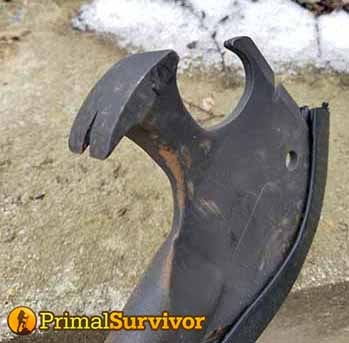 As I mentioned my dislike for the balance of this tool a few times, I won’t go into that again here.

But I do really like these two functions of the Trucker’s Friend. The hammer is very powerful, one of the strongest I’ve used, and it’s capable of repeatedly breaking through stone after stone.

Have an obstacle in the way? Pow, claw hammer.

Got a few pallets that need to be partially deconstructed and reassembled for a new purpose? Zoom, claw hammer.

The pallet I used to break apart was an old one that was on its last legs. The wood was flimsy and broke easily, but the Friend still ripped whole planks off.

The pry bar feature is solid. That’s a tool I often wish I had but never think to carry. With the Trucker’s Friend, I don’t need to worry about having a solid tool for leverage anymore.

More importantly I don’t need to substitute a different tool that isn’t designed for the job, risking injury to myself or damage to the tool.

Strong enough to get the job done and durable enough that I wasn’t concerned of breaking the Trucker’s Friend during use. That gives this tool some extra credit.

Here we go, a look at the tests I performed using this tool.

If the Trucker’s Friend has a special purpose or place in my heart, it’s as an excellent smasher.

Yeah, I know, really eloquent word choice there, but the Trucker’s Friend doesn’t want a fancy title. It’s a simple, strong, and heavy tool for smashing stuff. In that capacity it works wonders.

So I decided to crack into a few different materials for this, and I regretted much of it immediately.

This tool is not good for chopping wood, plain and simple. It’s pretty good at splitting dried wood and can fell a tree well enough, but I’d never trust it with anything else.

For serious wood chopping we would recommend a dedicated survival axe.

But if for some reason you need to hack into a stump, or to whittle your way through a large tree, the Friend will get the job done eventually. Just practice some extra caution along the way.

We had a few Christmas trees ready for the chipper and I took the axe to their stumps. It cut well enough, but not as good as a hatchet.

It works admirably as a nail puller and disappointingly as a hammer.

How often are we going to need to drive nails? Not sure, but I wouldn’t like using this tool for it in almost any scenario. It’ll get the job done but it’s not very good at it. The modified grip it requires for precision work takes a lot out of the effectiveness.

But as a nail puller it works great, and it saves my other tools from being damaged.

I broke apart pallets with ease using the prybar and found no problem whatsoever doing it. 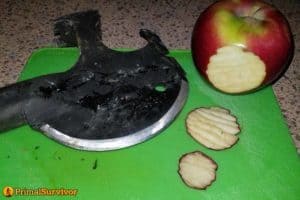 Well, it’s not very good at cutting through anything delicate; the edge of the this thing is far from fine, but it did produce some nice crinkle cut apple chips!

Definitely not the tool for any sort of careful cutting or delicate blade work.

And don’t worry, I didn’t eat those apple chips. The blade of the Friend is visibly covered in sap, and that’s not a great part of your diet!

It does arrive with a thin piece of rubber formed to fit as a blade guard, but it would be easily lost with regular use.

You can purchase a sheath custom fit for the Trucker’s Friend, it is well reviewed, but I haven’t had my hands on it so can’t say if it’s worth the cost.

I could store it in my bag somewhere secure, but it’s the type of tool I want at a moment’s notice.

That rubber handle is simply ugly. In the immortal words of the late, great Stan Lee, “‘Nuff said”.

It’s a good tool for the price, but it’s not my favorite.

Like most multi tools the Trucker’s Friend can do a lot, but it can’t do any of it exceptionally well.

It’s a good option to keep handy in your car, your pack, or your home (I keep mine in my work truck), and the strength of the tool as a prybar alone makes the tool worth its weight. Considering the additional features you get out of it, this is a decent purchase.

Maybe with future use I will become accustomed to the balance, awkward weight, and other erata of the Trucker’s Friend, and though it isn’t the tool to beat all tools it has definitely found a place in my bag.