The 7 Different Types of Weapons – Which Should You Choose?

Whether you are into martial arts, have a scary ex boyfriend, or want to be prepared for the zombie apocalypse, you’ll want to have weapons as part of your self-defense and survival plan.

Even Jackie Chan and Chuck Norris use weapons in their movies, and I doubt you are as good with your feet and fists as they are.

Many people will automatically assume that a gun is the best survival weapon, but this isn’t always the case.

Each weapon has its pros and cons for certain situations. Take the time to learn the types of weapons so you can be prepared! 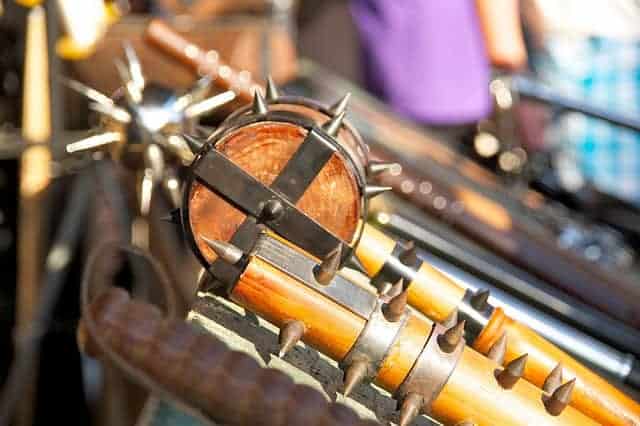 Also called trauma weapons, these are the oldest types of weapons ever used by humanity.

The original impact weapon was probably just a heavy rock thrown at an attacking animal. Over the centuries, impact weapons have picked up some terrifying modifications, like spiked ends.

Examples of impact weapons include:

If you are going into combat against an unarmed attacker, then an impact weapon will provide you with a great advantage. For starters, it gives you greater reach so you can hit the attacker before he even gets close to you.

Impact weapons can also be used to knock weapons out of an attacker’s hands.   A major plus of impact weapons is that they are easy to make (like these DIY weapons).

Prisoners have been known to make them out of rolled up towels with bars of soap inside. Simple yet highly effective!

The obvious disadvantages of impact weapons is that you’ve got to be close to your attacker to use them. If the attacker has an even longer-range weapon (like a gun), then it won’t do you much good. You’d have to use it strategically, such as hiding from the attacker and then using the weapon to bash his head in. 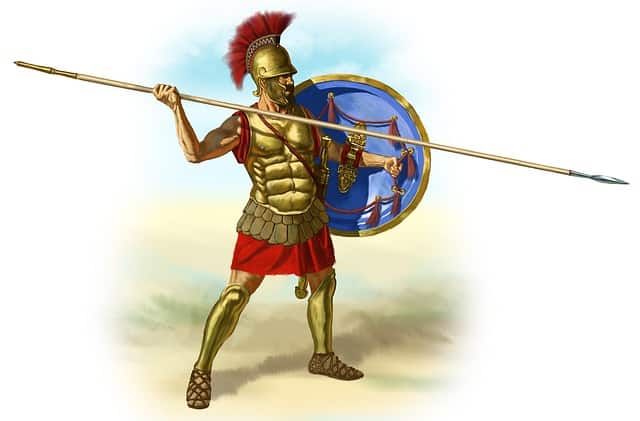 If you are being attacked, you want to keep as much distance between you and the attacker as possible, as this will minimize the risk of you getting struck and injured.

There are many downsides to these weapons though, like the fact that you’ve got to have good aim, and that you will lose your weapon after throwing it (which could mean it ends up in the attacker’s hands!).

Examples of throwing weapons include:

The first bladed weapons go back as far as the bronze age in 1700 BC. For hundreds of years, these were the weapons of choice throughout the world.

Long bladed weapons, such as swords, also allow you to put some distance between you and the attacker.

Another plus of bladed weapons is that they can be used for other purposes, such as chopping up your dinner.

In modern combat and self defense, bladed weapons have a lot of disadvantages. First off, it takes skill and training to use a sword!

Knives and other short blades might be beneficial in a street fight, but you would need to get lucky and hit a vital organ. Otherwise, you aren’t going to debilitate the opponent and can get injured.

I personally would rather have a spiked club than a knife as a weapon!

Examples of bladed weapons include: 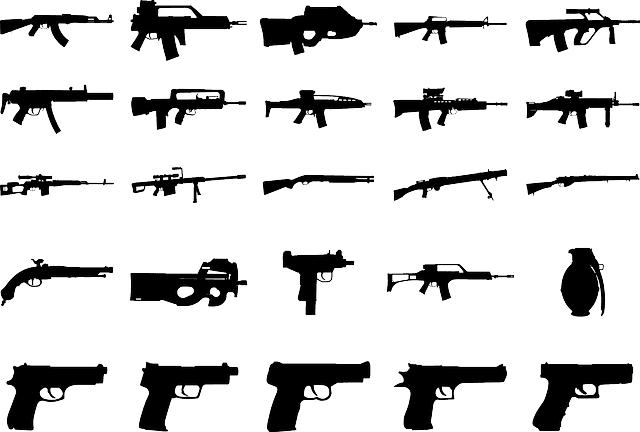 When firearms were first used in combat in about the 14th century, it changed history. It now became possible to attack enemies at such a distance that they had no alternative but to flee.

Today’s firearms have become so sophisticated that they have features like electronic target tracking and virtually unlimited rounds.

There are some disadvantages to using firearms as a survival weapon. Aside from the obvious bureaucratic issues like permits and legality, there is the fact that firearms rely on ammo (which is why ammo will make a valuable survival barter item).

A pistol is virtually useless once you run out of bullets, unless you want to throw it at your attacker.

The loud bang of the firearm could also alert others to your location, bringing on even more attackers.

It only takes a basic knowledge of chemistry to make a bomb, and already we’ve seen numerous examples of homemade explosives wreaking havoc.

The most famous is probably Timothy McVeigh who killed 168 people and injured over 600 with a truck bomb during the Oklahoma City bombing. And there was Ted Kaczynski, who mailed bombs to universities and airlines. In modern warfare, improvised explosive devices (IEDs) are a huge threat. In the recent Iraq war, IEDs accounted for 63% of coalition deaths.

The core benefit of using explosive devices is that you can injure your enemy without even having to be there, such as with landmines or bombs set on timers. But explosive weapons can be highly unreliable.

Many people attempting to make homemade bombs end up killing themselves when they accidentally go off.

Some examples of explosive weapons include:

For me, these are the downright scariest types of weapons. I’d rather be blown up by a bomb than have my skin burned off with a flamethrower!

The first flamethrower was likely used by the Greeks on their naval ships. They would use handheld flame devices to burn enemy ships.

It wasn’t until WWI that the modern flamethrower came into combat though. The Germans used flamethrowers in more than 600 battles.

Flamethrowers have a lot of disadvantages, like being very heavy to carry and usually requiring teams to operate.

They can also malfunction and cause injury to the operators.

Flamethrowers have come a long way though. Modern flamethrowers can light targets 160 to 260 away. Soldiers can also spray flammable liquid over targets first and then use the flamethrower to set them on fire. 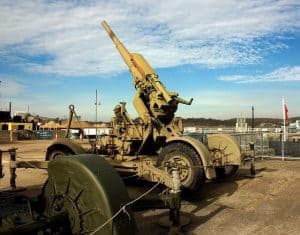 Artillery is a big category of weapons which includes any mounted projectile weapon that isn’t a small arm.

Artillery technology is constantly being improved upon, to the point that civilians are defenseless against these weapons.

For survival, you could make your own primitive artillery, like a catapult or improvised cannon, but you’re probably better off fleeing if you need artillery!

Examples of artillery include:

Which one weapon would you want when SHTF?