Moss and lichen are found around the globe and, with very few exceptions, all are edible even if they aren’t very tasty!

We’ll take a look at what mosses and lichen are safe to eat and provide some additional information on what they’re going to contribute to your diet.

So It’s Come to This: Edible Mosses and Lichens

Desperate times call for desperate measures, and that’s about the only time you’ll find yourself eating moss or lichen. These things are not tasty, and no amount of salt, pepper, and garlic will make them mildly appetizing.

Trust me. I had the intent of providing an edibility scale here after I sampled the list. But after eating several I realized that a scale rating between “terrible” and “even more terrible” wasn’t very helpful.

Suffice to say, you won’t be eating these things for their flavor.

It’s going to be a survival situation where you need to supplement your diet with some foraging.

On top of that raw lichen and mosses are very acidic in composition and can cause some serious stomach discomfort. I didn’t experience that in my taste testing, but I also grew up eating immature crab apples, so I might have a digestive tract accustomed to these foods.

How to Prepare Lichen and Moss

The best guidelines are presented by Eat the Weeds, which suggests soaking the stuff in multiple changes of water over a period of two days. Other foragers will eat lichen and moss raw or dump it right into a soup.

Adding wood ash or baking soda can aid the edibility but not the taste by reducing the acid levels.

Lichens are often found growing on trees, rocks, and other dirty/gritty places. If you don’t at least rinse it out you’re going to get a mouthful of soil, stone, and probably dead bugs.

But hey, it’s survival, so we need all the protein we can get!

If you’re really adventurous you can find sweeter, more edible lichen in the stomachs of reindeer and caribou. Apparently it’s much better tasting when it’s already had one round of digestion to sweeten the acidic taste, but you’re on your own for that taste test!

Should You Even Be Eating This Stuff?

I’m a conservationist through and through and I object to dining on lichen except in dire situations. Not only does the stuff taste horrible, it provides little nutrition of any sort.

It also takes a very long time to grow. We’re talking centimeters per year. A single footprint through a patch of lichen can demolish decades of growth. And because it’s lived for so long it’s potentially full of pollutants from over a period of hundreds, or even thousands, of years.

Lichens and mosses are also critical to the health of the ecosystem;6% of the earth’s terrestrial surface is covered in lichen, a reflection of how widespread it is and how many ecosystems it covers.

I would suggest lichen being a last-ditch solution to your starvation woes.

Disclaimer: Although a small fraction of mosses and lichens are toxic, it’s always better to play it safe than sorry before eating anything in the wild.

Listed below we have some common and more easily identified species, but you should still always follow the universal edibility test guidelines and your own common sense before filling your belly.

A familiar sight in woodlands in the northern hemisphere of the Americas though it’s rare anywhere south of the Appalachian mountains. This moss, actually a lichen, is easily identifiable because of its similarity to deer antlers.

It’s also a huge aspect of the diet of caribou and reindeer. The indigenous people of Canada make frequent use of reindeer moss in their diet, though it’s as more of a filler than a primary food source. It’s often mixed with other foraged foods to improve its taste.

Another edible lichen native to the northern hemisphere in Europe, Iceland, and North America. Look for it in higher elevations where it’s often growing on the side of stones and cliffs.

This lichen is very starchy (so long, potatoes!) and is best when used in soups and stews.

Oak moss can be found, you guessed it, on oak trees. It’s a bit more hairy looking than the other lichens and mosses on this list and is almost always found on oak, fir, and pine trees.

This lichen is toxic if eaten raw and will cause terrible stomach pain, but boil it twice in two different pots of water and you’ve got yourself a meal.

This is a nice option that probably tastes better than anything else on this list. Look for this dark brown lichen on dead conifer trees in cooler, mountainous climates.

It’s growth tends to be much longer than similar lichens and mosses which helps with identification.

Cook this by placing it near the fire and keeping it flipped and rotated. Once it is brittle and dry and crumbles easily, you can boil it in water until it takes a thick consistency. Or just eat it raw!

Better Uses for Mosses and Lichen 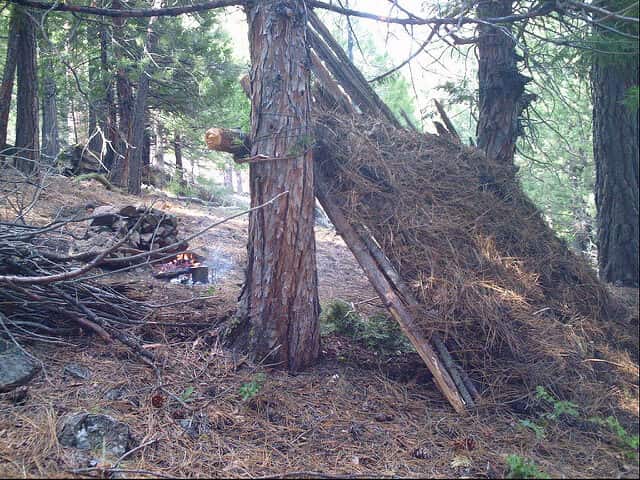 Moss can hold up to thirty times its weight in water, so this makes it an excellent roofing material for a shelter. Many can easily be “skinned” from their surface and transplanted to a new area. If the roots are stuck to stone, or if they pull up chips of wood from a log or other natural surface, it probably won’t grow after being transplanted.

Mosses can also serve as a functional insulation, and even a camouflage in the right environment; basically, you want moss on the roof of your survival shelter!

One of the more interesting uses of moss is as a bandage. Grab a few handfuls, boil it to sterilize then use as a dressing for wounds. During the World Wars many countries used this stuff as improvised bandages with real success.

Sheets of moss when dried can also be great kindling.

Until the Next Time

Edible mosses and lichens exist, but they aren’t your first option for calories. Familiarize yourself with the common ones and learn how to perform the universal edibility so that if you need them, you can dine without fear.