Fallout and Nuclear Bomb Shelters Near Me (Locations and Options)

If a nuclear bomb were to hit, the blast would create a massive fireball which would vaporize everything nearby. The fireball would shoot miles into the atmosphere – pulling dirt and debris with it. The radioactive debris then falls back to the earth, contaminating everything it touches.

This is known as fallout. You’d need to immediately get in a fallout shelter to avoid getting poisoned.

Wind and rain can cause fallout to spread far away from the blast site. This “delayed fallout” could cause radioactive particles to fall all over the earth – which is why knowing where a fallout shelter is essential, even if you don’t live near a potential target.

While you hopefully never will need this information, it can’t hurt to know where fallout shelters are located nearby and what to do if a nuclear alert goes off.

What Are Fallout Shelters?

Contrary to what some people think, a fallout shelter is not the same as a bomb shelter. It is not meant to help you survive the destruction from a nuclear bomb.

Even if you had enough warning to get to a bomb shelter, experts generally agree that a nuclear bomb would vaporize everything within 0.3 miles of Ground Zero.

Instead, the purpose of a fallout shelter is to protect you from the radioactive particles falling from the sky.   By getting into a shelter quickly, you can avoid the lethal fallout levels immediately after the blast.

Tip: Check out the NukeMap tool. It lets you map a nuclear bomb’s blast area and fallout distance and even lets you change wind direction to see how far fallout would blow.

What Makes a Good Fallout Shelter?

Fallout shelters need to be made from thick layers of dense material. The more material you have between you and the fallout, the more protection you will have. This is why many fallout shelters are built in basements or abandoned mines: the layers of dirt provide natural protection against fallout.

How well a shelter protects against fallout is measured as Protective Factor (PF). Think of it like SPF but for fallout. In a shelter with a PF of 200, you would receive 1/200th of the dose you would have received in the open.

How Quickly Do You Need to Get Inside a Fallout Shelter?

You have only about 10 to 15 minutes to get to shelter before massive amounts of toxic fallout falls to earth. According to the Johns Hopkins Center for Health Security, these minutes are critical to survival.

The sooner you get inside, the less likely you are to be lethally poisoned or get cancer later down the line.

You can set up your phone to get alerts about disasters like nuclear blasts, hurricanes, tornadoes, and more. Read about how here. I also recommend getting an emergency NOAA radio with an alert feature.

Federal guidelines (from multiple countries) say you should take immediate shelter in whatever adequate shelter is nearby – even if the shelter doesn’t provide the best protection. An “adequate” shelter would be a shallow basement, the top floor of an office building, or another structure with a PF of at least 10.

The reasoning is this: it is better to stay in an adequate shelter than risk going out into the radioactive fallout at its worst.

Remember that roads get blocked, and traffic gets insane during emergencies. Even if the fallout shelter is only a “short” drive away, you might not make it in time.

You should only evacuate if your current shelter is completely inadequate, such as a mobile home or a wood home without a basement. In these situations, it could be worth the short-term exposure for the long-term protection of a better fallout shelter. 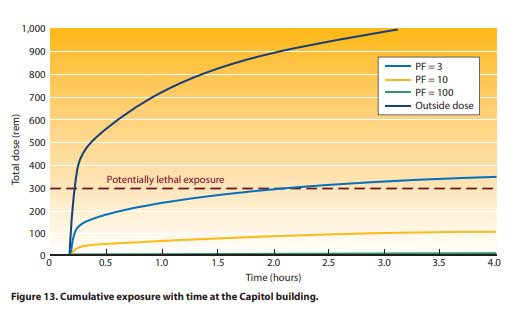 As you can see from the chart above, spending any amount of time outdoors in the first 30 minutes after a blast could create a lethal dose of radiation. If you have adequate shelter, it’s better to stay put!

How Long Do You Need to Stay Inside a Fallout Shelter?

Because radiation decays rapidly, the potential for radiation exposure decreases 55% an hour after the explosion and 80% after 24 hours. This is why Ready.gov says to shelter for at least 24 hours after a nuclear blast. Ideally, you would shelter even longer.

Remember to have emergency supplies stockpiled in your shelter and a bug out bag packed, so you have everything you need with you.

Are There Public Fallout Shelters in the USA?

They are often in the basement of public buildings like movie theaters, banks, or universities. Many residential apartment buildings built during the 1950s and 60s have fallout shelters too.

By the 1970s, funding for this program dried up. The fallout shelters mostly went into neglect or were repurposed for something else – like all those NYC fallout shelters that are now used as laundry rooms.

Note:  Many of these public fallout shelters were not specifically built as such. Instead, they are buildings with thick walls or basements deemed deep enough to protect from the fallout.   Your basement might provide better protection!

Below are links to maps of public fallout shelters in the USA. But don’t assume that you’ll be able to use these shelters, though, as most have been completely neglected. Some of the shelters might even be sealed shut. Others might be impossible to access during an emergency, such as military bunkers, which are guarded.

The bottom line? You must go and check out the fallout shelters on the map yourself! Don’t just assume they are still there.

Also, check out the Civil Defense Museum’s Collection of Community Shelter Plans. This collection has old maps showing where fallout shelters were in the 1950s and 60s. They have plans for many places in Texas, Baltimore, Massachusetts, and more. Many shelters are likely discontinued, but you might also be surprised to learn that there is a fallout shelter near your home.

You can also go to Ready.gov Shelters to search for shelters. Most of these are not for fallout but shelters for natural disasters like hurricanes. However, since a natural disaster is much more likely than a nuclear attack, it’s good to know where these shelters are located too.

The Downside of Public Fallout Shelters

One of the problems with public fallout shelters is that anyone could come in. Let’s assume you can get to the shelter within 10 minutes, meaning you’ve escaped the worst of the radiation.

But then, an hour later, someone else comes to the fallout shelter.

Simply opening the door exposes you to radioactive fallout, not the mention all of the fallout on the person’s clothing and body. You might not be able to keep that person out (assuming the door even locks, good luck convincing other people in the shelter not to let the person in!).

Thus, it might make more sense to shelter in your basement than rush to a “better” fallout shelter in the next-door public building.

What If You Can’t Find a Fallout Shelter Near You?

Since it’s improbable that you’ve got a fallout shelter nearby enough to be useful, you should know other safe places. You want to find sites with thick, dense materials around them. These materials do best at shielding from radioactive fallout. Here are some options.

1. Basement or Crawlspace of Your Home

Going into the basement is probably your best choice if a nuclear blast occurs while you are home. As mentioned before, it is better to take adequate shelter than risk high exposure by trying to get to a better fallout shelter located halfway across town.

While basements alone don’t provide much shielding against fallout, there are simple things you can do to increase protection — like building walls out of sandbags and staying behind them. The sandbag would absorb some of the fallout. 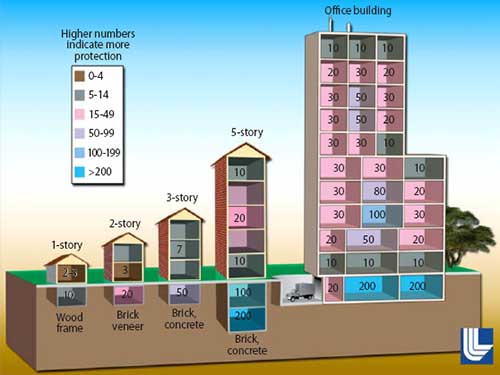 Try to get to the lowest level and the most interior part of the parking garage. One study found that the -1 level of parking garages had PFs ranging from 491 to 794. At the -4 level, the protection was up to 6,397.

Going 3 feet underground will give you a protection factor of 5,000. The actual PF would likely be less because of open entrances, but mines and caves still provide excellent protection against fallout.

However, the problem with relying on a mine or cave as a fallout shelter is that it’s doubtful you’d be able to get to them fast enough. As mentioned before, it’s usually better to stay in a less-protective shelter (like your basement) than risk exposure trying to get to a cave or mine. Plus, don’t be surprised if other people have the same idea and it is crowded with contaminated people!

Because they are underground, subway tunnels can protect against fallout. They often have PFs greater than 100.   The PF would be higher if it weren’t for ventilation and entranceways found throughout the system.

You could increase protection by going deeper into the subway system, far away from entrances (and also further away from new people entering with contaminated clothing and skin). Assuming it wasn’t destroyed by EMP, having a flashlight in your EDC would be useful for getting you deeper into the tunnels.

Many places have tunnels, caves, catacombs, and other underground tourist attractions. These could provide excellent protection against fallout, assuming you could make it there in time.

Do a Google search for “urban exploring underground city name.” You’ll find some really cool places which could work as fallout shelters.

Like abandoned subway concourses in Philadelphia. Or the hidden tunnels under San Francisco. Or catacombs in graveyards that you can sneak into.

Unlike touristy sites, these underground attractions are less likely to be crowded in the aftermath of a nuclear disaster. You might have to hop a fence or two to gain access, but you could have the place to yourself – thus reducing contact with people covered in fallout. 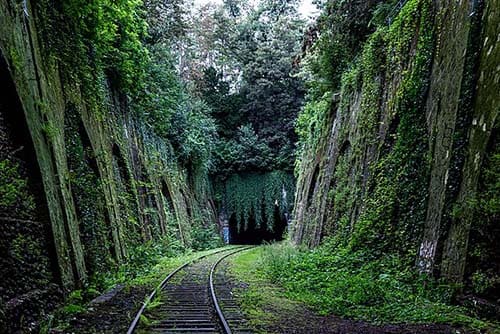 Building Your Own Fallout Shelter

Because you need to take shelter immediately after a nuclear blast, having your own fallout shelter at home would be the best option. There are many ways to build one without spending a fortune – such as reinforcing walls in your basement or making a root cellar.

For starters, I recommend checking out the guide by Eugene P. Wigner – a physicist, Nobel Laureate, and “only surviving initiator of the nuclear age.” The guide was last updated in 1987 but still has some good info about building materials and ventilation. You can read the free PDF here.

And while the threat of nuclear war may be terrifying, don’t forget to prioritize your prepping needs! First, focus on emergency food, water, and other essential supplies. Only then should you worry about your nuclear fallout shelter and nuclear survival kit. 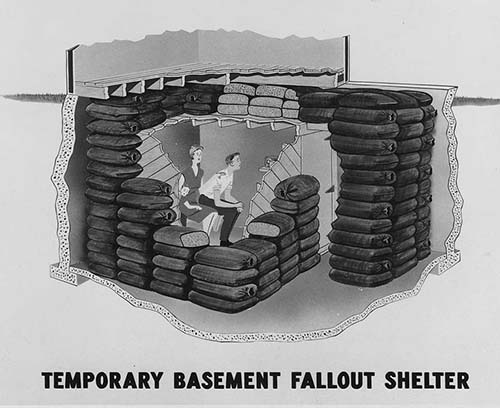