What Happens During a Nuclear Attack?

If you are caught at Ground Zero of a nuclear attack, don’t count on surviving. A one-megaton hydrogen bomb would make a huge crater at the site. Every structure within a two-mile radius would be destroyed.

There would also be other immediate effects that make nuclear survival unlikely, such as firestorms raging as the oxygen is consumed from the air. The rising heat would cause hurricane-strong winds that would spread the fire further.

It would be theoretically possible to survive even close to the center of a nuclear blast. You’d need a structure that could withstand 50 pounds per inch, and it would mostly need to be underground. However, when talking about nuclear survival kits though, we are usually talking about surviving nuclear fallout.

The biggest threat to nuclear survival is fallout. Nuclear fission creates many types of radiation. None are “safe,” but the most problematic ones are gamma rays and neutrons.

Gamma rays and neutrons are much more deadly than the actual nuclear blast! Over time, they would kill more people – including those far outside the blast site.

In the event of a land detonation, the particles of earth become radioactive and are thrown into the sky, forming a mushroom cloud. These radioactive particles eventually return to the ground, hence the name fallout.

A nuclear bomb that gets detonated in the air is much worse than a land detonation. It won’t produce an ominous mushroom cloud, but the radioactive particles are released into the air. The wind carries them, and they fall on the earth in a much larger radius.

The Risks of Fallout

Fallout exposes us to radiation. That radiation causes changes to our cells on a chemical level, altering DNA.

Radiation exposure is measured in rems (Roentgen equivalent man). On average, people are exposed to 0.62 rem of radiation per year.

Once you start getting into exposure, amounts of over 100 rem health risks are seen, but nuclear survival is likely.

Levels of 200-400 rems mean illness and likely mortality. At 600 rems, death is likely from internal bleeding within 2 to 12 weeks. The US military believes that levels of 8000 rems will cause immediate death.

Fallout Does NOT Have to Mean Death

One of the biggest myths about nuclear fallout is that it would destroy the earth and everyone in it.

While immediate contact with large amounts of fallout would signal death, you’ve got to remember that nuclear particles degrade fairly quickly.   There would still be a higher risk of cancer and congenital disabilities in areas near the blast site, but this risk would subside.

Just look at Hiroshima – their cancer risks from 1958 to 1987 weren’t much higher than areas in Japan not hit by the bomb.

I mention this to get across an important point:

Fallout is most dangerous immediately after a nuclear blast. Don’t try to flee. Take cover to avoid exposure.

But potassium iodide is not a magic pill against the effects of fallout! It only protects the thyroid and will not protect the rest of the body from absorbing radiation.

You should have potassium iodide tablets as part of your nuclear survival kit – don’t think you can take them and then walk safely through radiation.

The best protection is still shelter and time. 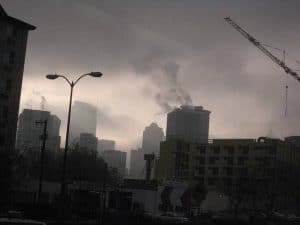 One of the fears of nuclear warfare is the risk of a nuclear winter. This theory states that a nuclear bomb would cause such large clouds of radioactive material in the atmosphere that it would block sunlight.

The result would be darkness, preventing photosynthesis and destroying the food chain, resulting in mass extinction.

Unfortunately, this is one of those scenarios we can do little to prepare for. You could aim to have a year’s stockpile of food and water in your nuclear survival kit. However, you’d also have to develop a comprehensive plan for protecting that stockpile.

If you can afford a secure underground bunker large enough to hold enough food to last through nuclear winter, go for it.

Otherwise, focus on doing what you reasonably can to secure your safety.

One part of the nuclear risk which gets glossed over is Electromagnetic Pulse or EMP.

When nuclear bombs are detonated, the electrons start going incredibly fast. This creates a short but powerful magnetic field (EMP). The EMP isn’t dangerous, but it destroys electronics such as telephone wires, electrical plants, radios, and electronic devices.

EMP is so strong that the Star Fish Prime nuclear tests caused electrical disruptions more than 900 miles away!

Our entire society relies on electrical devices to function. There would be no electricity. You wouldn’t be able to get info from your emergency radio. Definitely no internet. Heck, even your car probably wouldn’t work!

If you don’t know much about EMP, I suggest you read these articles:

Protect your home, vehicles, and business with EMP SHIELD. Listed by the Department of Homeland Security. $50 Off Coupon for Primal Readers auto-applied at checkout.

Protecting Yourself from Fallout – Don’t Flee!

The most important thing to remember about surviving nuclear fallout is not to flee. While this goes against our instinct, the amount of fallout in the air is the highest right after a nuclear detonation.

If you were to flee immediately, you’d expose yourself to high radiation levels which could quickly kill you.

By contrast, if you seek shelter, you could avoid much of the fallout and stay safe.

FEMA and the Department of Homeland Security recommend going as far below ground as possible or into the center of a tall building. The goal is to get as much material (concrete, brick, soil, etc.) between you and the radioactive material as possible. The material is a barrier that the radioactive particles have to get through.

In 2010, a nuclear exercise called Operation Golden Phoenix tested what would happen during a nuclear attack in Los Angeles. The findings showed that 285 thousand people would die or get radiation sickness – but 84% of these could be avoided if people just went to their basements or another shelter.

Read how to find a nuclear fallout shelter near me. 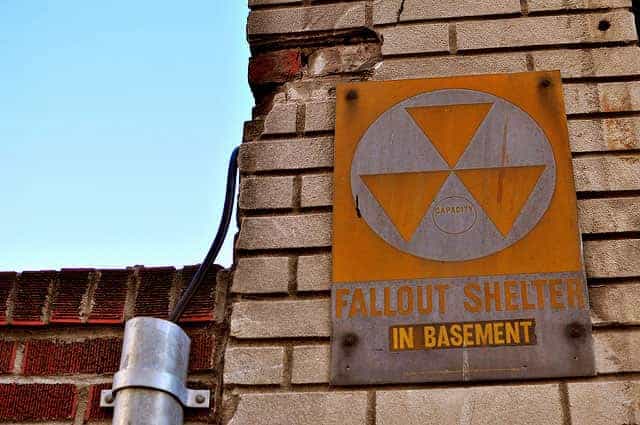 If you want to take nuclear survival to the next level, you’ll get a fallout shelter.

Many people build their nuclear fallout shelters in their backyards because the ground provides protection.   However, it is probably best to have your fallout shelter in your basement because you wouldn’t have to run outdoors (and expose yourself to fallout) to access it.

If you are considering a fallout shelter for nuclear survival, know they are rated in PF (Protection Factor). A nuclear fallout shelter should have a PF of at least 40. That means you’d only receive 1/40th of the radiation found outside.

How Long Does Nuclear Fallout Last?

There is only so long you can hunker down in your shelter after a nuclear detonation. At some point, you will have to flee to safer ground.

Unfortunately, there is no good answer to how long fallout lasts first, because we don’t have much research on the topic. Second, it would vary depending on the size of the blast and factors like the weather.

In general, though, fallout radiation degrades quickly. It will be around for years but won’t be so intense. The biggest threat is during the first two weeks. After two weeks, it will have declined to approximately 1% of its initial radiation level.

During the 15-megaton nuclear test at Bikini Atoll in 1954, the blast caused contamination across more than 7,000 miles. That’s 20 miles upwind and 350 miles downside.

That was during a ground test. An air detonation would cause nuclear fallout to span a much higher radius.

Again, there is no exact way to calculate a nuclear bomb’s fallout radius. We can’t predict the size of the bomb or wind patterns.

What you do need to know is to stay put for as long as possible. When necessary or authorities tell you to evacuate, get far from the blast zone – and get away quickly!

One more reason to have your Bug Out Bag packed and a Bug Out vehicle ready.

It might seem overkill, but a hazmat suit will help protect you from radiation when it is time to flee! While you’re at it, wear the hazmat suit in your shelter to protect yourself. 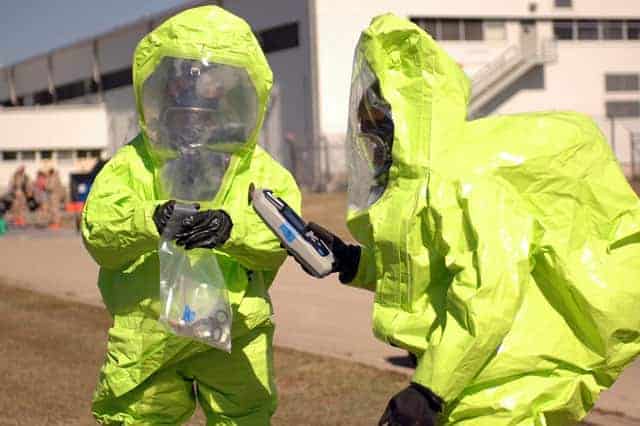 Protecting Your Food and Water from Fallout

Though there isn’t too much conclusive research on the subject, the general expert consensus is this:

Sealed food and water would be safe to consume after nuclear fallout.

Ideally, this would be non-perishable food and bottled water stored in your shelter, protected from potential fallout. If you had to take food and water from outside, you’d need to carefully clean the containers to remove any fallout.

You would not want to forage for food, garden, or hunt after nuclear fallout. Those food sources would likely be contaminated for a long time.

If you run out of bottled water, your best water source would be from deep wells and covered reservoirs. This water you’d need to treat against typical pathogens like bacteria and parasites. That could easily be done with a survival filter.

But no water filter is going to remove radionuclides from fallout-contaminated water!

The only way to remove radioactive particles from water is to use reserve osmosis or ion exchange.

Even if you aren’t worried about nuclear survival, you should still have an emergency kit packed for hurricanes, earthquakes, blackouts, and other disasters. In addition, you need to have a communication and emergency plan in place.

You can get a 72-Hour Emergency Preparedness Checklist here.

The items in the nuclear survival kit checklist below are specifically for protecting you from fallout and staying alive while hunkering down. Don’t wait until it is too late to prepare for nuclear survival!

2. If Away from Home When Nuclear Blast Occurs

Are you preparing for nuclear survival? How?