How to Make Your Own Yeast for Bread

Are you out of yeast and want to make bread? It’s actually possible to grow your own yeast at home.  Also known as sourdough starter or wild yeast, the process is simple and all you need is some flour (or other starch like potatoes), water, and a bit of time.

What is Wild Yeast?

Wild yeast/sourdough starter is made from the healthy yeasts which are naturally found on grains or starches.

When you add water to the flour, it “activates” the natural yeast on the surface.  The yeast starts to grow and replicate.  You “feed” the yeast regularly and it can be used to make bread. Before commercial yeast was available, this is how people around the world would make bread.

*See these recipes for bread without yeast

With most foods, if you were to leave them out for several days they would grow mold and become infested with bacteria.  Why doesn’t this happen with wild yeast starter?

The difference with wild yeast is that most bacteria don’t like to eat the starch in flour.  The flour also contains healthy bacteria called lactobacilli.  As the natural yeast and lactobacilli start to replicate, they release lactic acid which inhibits the growth of harmful bacteria.

*These same bacteria are also what is used to make yogurt and DIY fermented pickles.

How Does Wild Yeast Compare to Commercial Yeast?

Commercial yeast is typically only made from a single strain of yeast (Saccharomyces cerevisiae). They don’t contain any healthy bacteria.  The strain of yeast was chosen because it works quickly and is cheap to isolate.

By contrast, wild yeast starters contain numerous strains of yeast as well as lactobacilli bacteria.  The yeast and bacteria both break down proteins in grains (including gluten), making them easier to digest.  This is why many people argue that bread made from wild yeast is healthier.  The wild yeast also gives the bread a fuller flavor.  Note that wild yeast doesn’t always make a sour taste.  It depends on the strains of yeast and how much developed.

While the traditional method of using wild yeast arguably does create a better-tasting and healthier bread, a lot of people still prefer buying yeast.

Because store-bought yeast can be used immediately and gives consistent results.  With homemade wild yeast, there can be some trial-and-error before you become familiar with your yeast and figure out just how much to add to make a perfect loaf of bread.

Read more about how to store dry yeast.

Other starchy vegetables can work too, such as sweet potatoes, parsnips, chickpeas, beans, and peas.  However, these can be a bit trickier to work with so I’d recommend using flour when first starting out with DIY sourdough starter.

The bubbly mixture is your yeast starter.  You’ll need about ¾ to 1 cup of the mixture to make bread (it depends on the starter; you’ll have to experiment a bit).

To use wild yeast starter in regular bread recipes, remember that starter is made out of equal parts by weight flour and water.  So, you’ll want to subtract equal parts flour and weight from the recipe and replace it with the starter.

If you want to use 200 grams of starter in a recipe, you’ll need to subtract about 100g of flour and 100g of water from the recipe.

I stopped using recipes and measurements for bread a long time ago.  But, if you want to be precise and are just starting out, I’d recommend getting a kitchen scale which has grams as an option.  It’s also good to use bread recipes from Europe since the ingredients are listed by weight instead of in cups.

Storing Your Yeast Starter for Later Use

After using your yeast starter to make bread, you’ll discard all but about ¾ cup* of the starter. The remaining starter will either go in your fridge or stay on the counter.

*Some people discard all but 1 Tbsp. of the starter. Others discard half of what is in the jar before feeding.  It’s a personal choice which will vary depending on how much starter you typically use to make bread.

Why do you need to discard some of the starter before feeding?

If you just kept feeding the starter, it would end up a mess of broken-down proteins.  You need to discard some of the starter so it remains fresh.  I leave about ¾ cup of starter.  Some people leave more or less.

You don’t have to throw away the discarded starter.  It can be used to make your next batch of bread.  You can also use starter in other recipes, like to make pancakes, crepes or even crackers.

Wild yeast is a living thing and needs to be fed regularly to stay alive.  Feeding it is easy: you just add equal parts flour and water (by weight) to the starter on a regular basis.

Here’s how to feed your wild yeast starter:

You shouldn’t use starter straight out of the fridge; the yeasts need time to wake up in order to be effective.  To use it:

Starter which was kept on the counter doesn’t need to be “woken up.”  You can use it straight off the counter, so long as you didn’t just feed it.

How will I know if my yeast starter has gone bad?

You’ll know if the starter has gone bad or gotten contaminated! The smell will be nasty or there will be visible mold growing.

There is liquid floating on the top of my starter. What is it?

This liquid is called “hooch.” It is a sign that your yeast starter is hungry.  Just drain off the hooch and discard it.  Then feed your starter and stir it.

If you are having trouble getting your yeast going, try these solutions:

Use your yeast in one of these survival bread recipes. 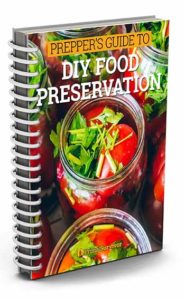 Want to stockpile your own food but not sure where to start? Download the Ebook.

You’ll learn about the methods you can use at home to store food for up to 25 years.

This is the information you need to build comprehensive food storage for a rainy day.