How Much Land Do You Need to Be Self-Sufficient?

A few weeks ago, I shared some tiny homestead plans that are 1 acre or less. Likewise, Jacob has a post about off-grid homes that you can get today. These plans are great because they show you how little land you need to become more self-sufficient.

But what a lot of would-be homesteaders want to know is this: exactly how much land do you need to be 100% self-sufficient?

What Does Self-Sufficient Even Mean?

Before I give you the exact number of acres required to be self-sufficient (and don’t worry, I will!), let’s first define what “self-sufficient” even means.

According to Wikipedia, self-sufficiency is:

A type of sustainable living in which nothing is consumed other than what is produced by the self-sufficient individuals.

Yes, this definition is in line with what most people think of when they hear self-sufficient homesteading. They imagine the pioneers of old who made everything themselves and were miles (if not days) away from their nearest neighbors.

But here’s the thing:

100% self-sufficiency is a fantasy.

I’m not trying to burst anyone’s bubble. And there most certainly are families who live 100% off the land and produce everything themselves.

I admittedly don’t know of any though, because they obviously wouldn’t have an internet connection to share their feats with the world. 😉

The only encounters I’ve had with completely self-sufficient peoples were tribes in the jungles of Peru (I spent one youthful winter trekking there).

And, again sorry to break your bubble, but those people were dying from weird parasite infections and the infant mortality was crazy high. Not exactly the idyllic life we associate with self-sufficiency!

One of the biggest myths about self-sufficiency is that you’ll never have to buy anything. This is simply not the case. Unless you are prepared to live like a caveman, at some point you are going to have to use money or the trade economy.

Even the pioneers weren’t completely self-sufficient. They would trade with neighbors or go to the local trading post.

Or, as I learned from reading Laura Ingalls Wilder (Amazon Links) books, they’d wait for the yearly visit from the traveling salesman so they could buy shoes. If he was late, they just went barefoot.

No One Is Really Completely Self-Sufficient

There is no shortage of blogs which tout how they achieved “complete self-sufficiency” on just a small amount of space. I love these blogs as they are inspiring and have lots of great tips.

But, when they say they’ve achieved “self-sufficiency,” what they really mean is that they are able to produce excess food, sell it for cash, and use this cash to buy other things they need.

This is a noble accomplishment and by no means should it be negated. However, claiming that they are “self sufficient” ignores all the hard work that other people did to make the tools and supplies down the supply chain. 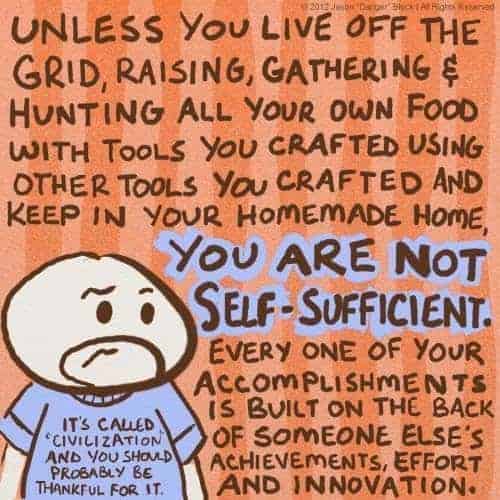 Even if it Was Possible, Would You Really Want to Be 100% Self-Sufficient?

Trying to close any of the many self-sufficiency leaks is VERY hard. As our friends over at Ready Nutrition write:

I once tried to make a pair of sandals from cloth thongs and discarded tires. After a few hours of work, I gave up. Even then, I wasn’t really starting from scratch. A factory had made the tires and another factory had made the cloth… not to mention the needle and thread I was using or the razor knife I used to cut the rubber.

And that’s just footwear we are talking about.

Let’s consider some of the other leaks in self-sufficiency.

Would you really want to:

Define What Self-Sufficiency Means to You

Just because 100% self-sufficiency isn’t realistic, it doesn’t mean you can’t strive for it. But before you set off, you’ve got to figure out your goals.

That last one is going to be tough. I mean really tough! Running a sustainable farm is hard enough without having to spin your own flax thread into fabric for clothes!

How Much Land Is Required to Be FOOD Self-Sufficient?

Obviously, the amount of land you need to produce all of your own food varies depending on factors like:

Depending on whom you ask, you’ll hear numbers as low as ½ acre of land to be self-sufficient all the way up to over 50 acres.

The General Consensus is 5-10 acres to be self-sufficient

Even though a lot of those sources put the number at a lot less, the general consensus is that you really need at least 5 acres of land per person to be self-sufficient. And that’s assuming you have quality land, adequate rainfall, and a long growing season.

Oh, and that’s also assuming that you are mostly eating a vegetarian diet. You probably didn’t know this, but meat used to be a luxury which people only ate on Sundays!

If you want meat in your everyday diet, you are going to need A LOT more land to be self-sufficient.

You don’t actually need that much space for livestock to roam. However you need extra land so you can rotate their pastures. For whatever reason, those websites making claims like “you only need ½ acre to be self-sustainable” fail to mention pasture rotation! 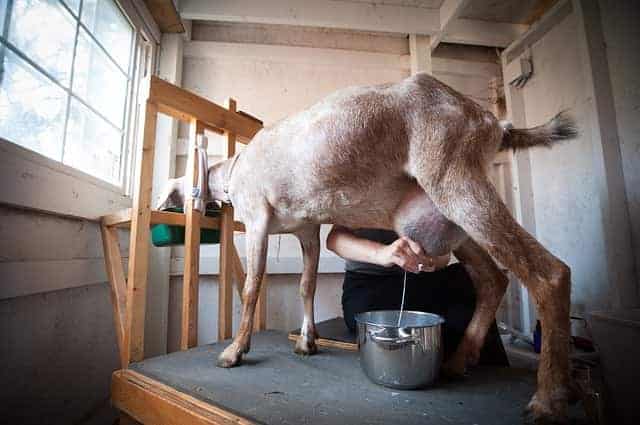 When working toward self-sufficiency, a lot of people think they will buy a small lot and gradually invest in it. But it usually makes sense to think in reverse:

Invest in more land now because a larger homestead is cheaper build up.

The smaller your land is, the harder it is to design. You can’t just say “Let’s just put that crop over there” when there is no “over there.” Every single choice you make – from species selection to crop orientation – is significant.

This makes the learning curve of small-acre homesteading a lot higher. There’s no wiggle room.

And to make a small plot of land get close to self-sufficient, you have to initially invest in a lot of expensive equipment and systems. As one farmer said on the real deal of being self-sufficient,

Is there anybody out there on a small acreage, able to raise 90% of their own food for the year, that hasn’t spent thousands of dollars on fancy hobby farm equipment?

By contrast, if you buy a larger parcel of land now, you have a lot more room for error. You have lots of wiggle room to design your homestead how you want. And you can gradually invest in the systems and knowledge which will truly make your land self-sufficient.With limited space, every choice is significant! 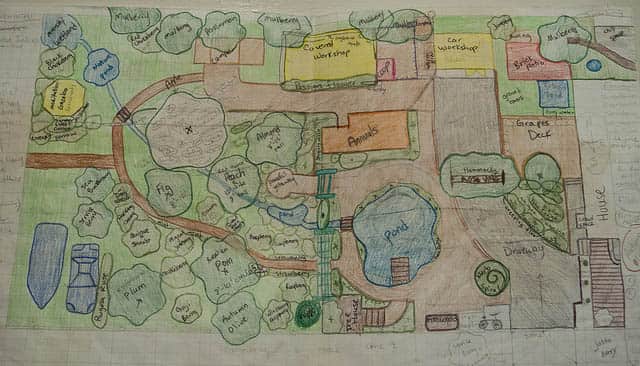 One of the issues I have with the prepper community is that it often promotes the “lone wolf” mentality.

You know what I’m talking about – a person (almost always a guy) taking off into the wilderness and surviving with just the bare necessities in his Bug Out Bag.

In reality, that guy by himself probably wouldn’t survive for long. Eventually, he’d have to team up with others… or be content with eating bugs in a dank cave for the rest of his life.

While it is great to work towards self-sufficiency, the reality is that no man is an island. As humans, we are stronger when we work together. If you really want to be free of all of the traps that come with modern living, then build a community of likeminded people.

I like how Toby Hemenway of The Permaculture Society puts it:

So stop sweating about how much land you need to be 100% self sufficient. Instead, start learning ONE skill that you are really, really good at and would be valuable to others. Then start finding others like you with diverse skill sets.

Do this and you’ll find that practicing self-sufficiency on the homestead doesn’t just connect you more to the land, but also to your community.

Are you raising your own food? How much land do you have and what does it reap?