Never would have thought the words “self defense” and “umbrella” would go together but, well, here we are.

I’m pleasantly surprised with the effectiveness of this item so lets get into this bad boy now. 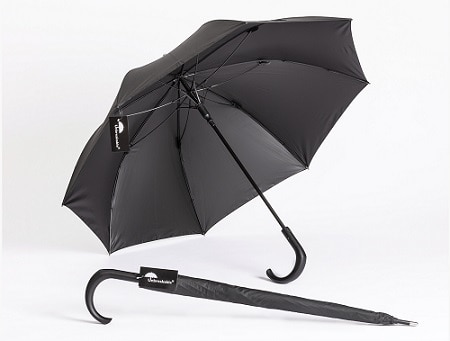 Primal Rating: 4 (out of 5)
Buy DirectCheck On Amazon

This has been a fun review for me. Self defense has always been a keen interest, but I’ve never considered something like an umbrella being used for this purpose. Maybe that’s because most umbrellas I’ve used in the past were flimsy, or built to handle little more than some heavy raindrops.

Now that I’ve gotten to use the Unbreakable Umbrella, I find it useful and beneficial, but it’s hardly found its way into the “gotta have it” category.. more on this later.

The company also sells a collapsible style umbrella, but the one I’ve reviewed is the walking stick model.

See more reviews in our round up of the best tactical umbrellas.

While waiting on this thing to arrive I toured the company website and watched their various demonstrations marveling at how much abuse they put it through.

“No way is this thing that durable,” I questioned.. The umbrella arrived without delay and felt sturdy enough, certainly more solid than other umbrellas I’ve used.

It’s not as heavy as I expected, and feels like it’s little more than a normal umbrella.

And it is very tough, completely capable of delivering a serious beating. But why read it when you can watch a demonstration; here’s the Unbreakable Umbrella smashing through concrete.

That was the best take out of many, but I’ve got four other short videos of this umbrella breaking through concrete It never bent or broke or developed anything besides some tiny, cosmetic scratches on the metal tip. 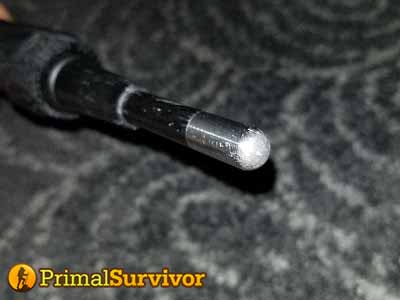 This damage may have weakened or broken the plastic catch on the release button of the handle… read about that just below.

I unfortunately didn’t have somebody to test that metal jabby point on, but considering how effortlessly it broke through concrete I have little doubt it’d make short work of human flesh.

But NOT Ultra Durable 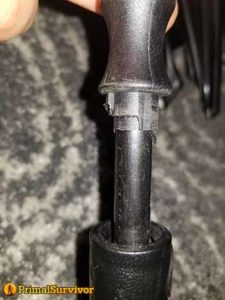 Blame it on the shipping process or my initial round of testing, but my Unbreakable Umbrella was broken rather quickly.

Like most umbrellas this one has a little action button on the handle that, when pressed, opens the canopy in a swift motion. Unfortunately, mine was broken right off the bat.

A small plastic catch seems to hold the umbrella runner in place, but mine is clearly broken.

I wasn’t nice to the Umbrella, but I didn’t intentionally try to break anything either. The company has a warranty that covers all damage and defects during “normal use”, so this damage might ordinarily be covered by a repair or replacement.

I did put the umbrella through some extreme testing and although it survived it was deemed not to be truly Unbreakable.

In my opinion this is a relatively minor issue bordering on the cosmetic; after all, the umbrella still functions and does all of its job, it’s just a little less springy opening up when I want it to. 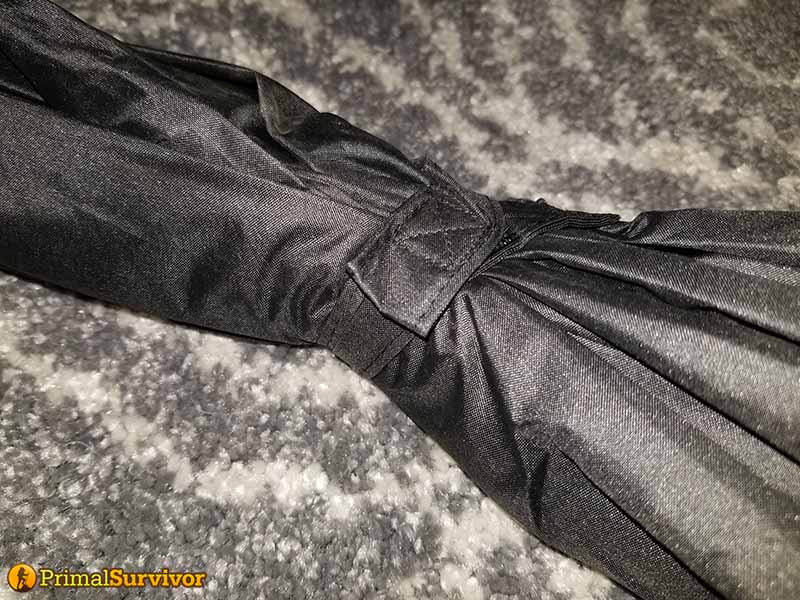 The highest value of this umbrella is… well,as an umbrella. It offers a wide and generous area of coverage from the rain, suitable coverage for two if you don’t mind getting close. It sheds water perfectly, better than the cheap umbrellas I’ve picked up here and there over the years.

You’ll find a nice sleeve that covers the umbrella fabric when it’s not in use, a small touch but one that offers added protection for the material that’s supposed to keep you dry. I’ve never seen an umbrella with a little coat like that, but it’s an ingenious addition.

The umbrella is designed to open with a little press of a button at the base of the handle, but the button itself seems rather delicate.

As mentioned before mine was broken on arrival. Luckily a little push or pull on the runner will open or close the umbrella, and a velcro loop will keep the canopy shut securely. Slide the sleeve down and you’re set. 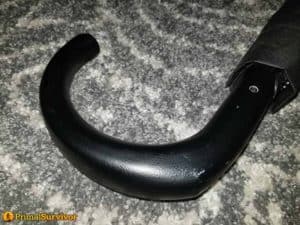 The handle is well shaped and a comfortable plastic to hold onto, but it’s a bit long for my arms. I’m 5’8” and my arms aren’t shorter than average, but for shorter folks the length of the Unbreakable Umbrella could make it impossible to use as a walking stick.

Luckily it still fits underneath my arm or gripped in my hand with ease.

The simplicity of the Unbreakable Umbrella is admirable. With zero bells and whistles and no special training required, its functionality comes to the users’ ability to swing a club.

Experience with a baseball bat is pretty good, but being able to swing any form of club or pipe will aid you tremendously when actually using this umbrella defensively. Masterful ability isn’t required here, but it’s helpful.

As a club it swings freely and easily, a well-balanced defensive weapon that hits very hard.

But I really liked the metal tip on this thing. The horrible parts of my mind imagined the damage it could do to, say, the top of a person’s foot with a solid slam, or the amount of pain it could produce if used to pin an assailant to the ground until help arrives.

But, again, I can’t really test that out on somebody. I tried to have my wife hit me with the umbrella but she wasn’t game. You’d think a guys wife would be eager to wail on him given the chance!

But there was something that stuck out to me, potentially an error and design flaw in the Unbreakable Umbrella.

Using the Umbrella When It’s Open 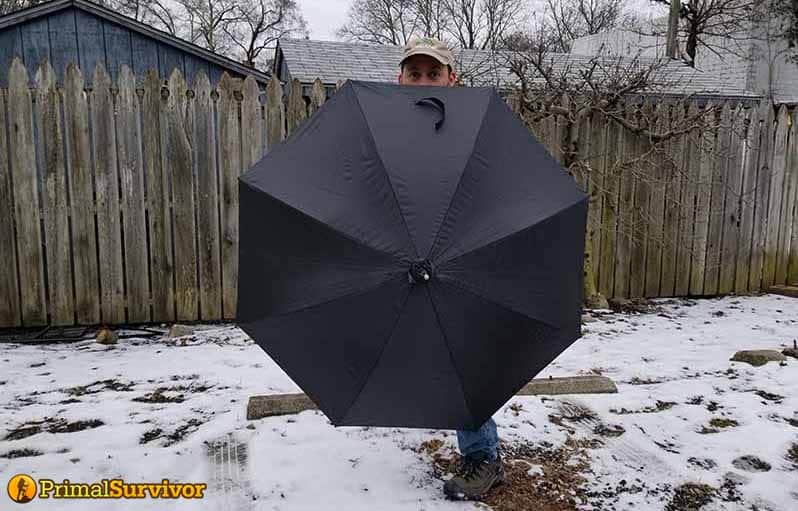 The Unbreakable Umbrella website has several excellent videos demonstrating the durability and effectiveness of the product I reviewed, but none of them demonstrate using the umbrella when it’s opened.

Unfortunately crime, bullies, and assailants don’t take a break when it rains, so how effective is the Unbreakable Umbrella as a tool for self defense when it’s opened?

First off it strikes me as a good defensive measure simply because of the wide coverage area it offers. It’s difficult to easily get beyond it, but it’s also impossible to see what’s behind that wide area.

While opened it also offers vital distance between you and an assailant; you could simply deter and eliminate the threat of danger by using the opened umbrella to keep your distance.

Its effectiveness as a club is effectively null when opened, but that solid metal tip is a powerful tool for jabbing. I didn’t have pumpkins available to jab into, but here’s a melon absorbing the brunt of this bad boy.

It’s a bit cumbersome to wield while open, though, but I think this trade-off is balanced well with its other defensive effectiveness.

Well, it doesn’t really have any other utility. It’s an umbrella, and it’s a useful self-defense tool. It can’t do much else, but that’s not a bad thing at all. A focused tool is an effective one.

That said you can still get creative with this thing.

I stashed a fifty dollar bill, a few bandaids, and some pain killers at the top of mine, tucked inside of a plastic bag and taped tightly in place. Hey, why not have it handy when you need it?

The umbrella’s strength allows it to serve as a climbing point too. You can hook the handle over a fence or brick wall to give yourself a bit of a boost climbing or safely descending. Not bad, and definitely not something I’d trust a normal umbrella with!

In a pinch it functions as a pull-up bar for when you’re stuck somewhere without access to a gym and just need to work out. 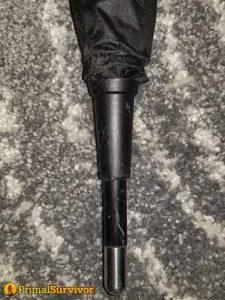 Like “The Purloined Letter”, the Unbreakable Umbrella can be hidden right in the open without batting an eye to its presence.

Many self-defense options are borderline illegal to carry, and some are eye catchingly obvious, but this umbrella takes the cake in terms of subtlety.

It is utterly indistinguishable from other umbrellas, and it’s not likely to draw any suspicion whatsoever being brought into a sports venue or similar public arena. I brought mine into a hockey game and several bars without a hint of suspicion.

This sort of anonymity might be the greatest strength of the Unbreakable Umbrella, an effective self-defense tool hidden in plain sight.

It’s pricey for an umbrella, but considering its Limited Lifetime Warranty the Unbreakable Umbrella is probably worth the cost… but only if you’re a regular user of umbrellas.

I think the “unbreakable” aspect of the umbrella is dubious, but for normal use it is durable. Besides the button release I’ve found no damage to the delicate ribs or any tears in the fabric. The button release on the handle having been broken so quickly is a bit disconcerting, but it still functions as an umbrella and an effective self defense tool.

This is a good tool, but not a wonder tool..

A solid purchase for commuters and travelers alike, I’m more comfortable knowing my wife carries the umbrella with her to work daily. I just feel bad for the poor sucker who meets the business end!