The contents of your Bug Out Bag are one of the most important things you need for disaster preparedness.  We’ve talked about this a lot before at Primal Survivor.

Bug Out Bag Checklists can help a lot when planning your own BOB.  But, as we’ve said many times, each person has different needs.  A BOB for a fit young man, for example, is going to look a lot different than those of a family.

To give you an idea of how different Bug Out Bags can be, check out these 4 examples of Bug Out Bag contents.

Not all of these Bug Out Bag contents are perfect, but looking at what they include and don’t include should help you decide what to put in your pack.

Example 1: The Military Bug Out Bag 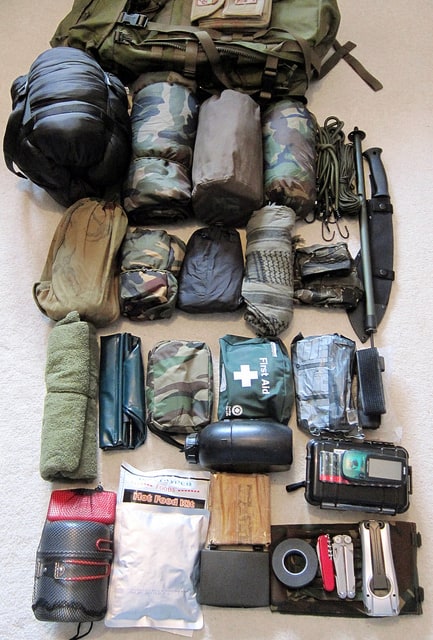 This Bug Out Bag was created by a female military veteran.  She’s done a really good job of choosing her BOB items, including a few items you don’t often see – like the collapsible washbowl.

She’s chosen a great survival knife (a khukuri), which would be a lot more useful in the wilderness than your standard folding knife.  The basha pole (see here for more types of fighting stick) is great, but I wouldn’t recommend it to preppers unless you actually know how to use it in combat.

It was also really smart for her to add waterproof pants to her BOB in addition to the standard waterproof jacket/poncho.  If you’ve ever gone backpacking in the rain, you know what I am talking about!

Show Me The Bag 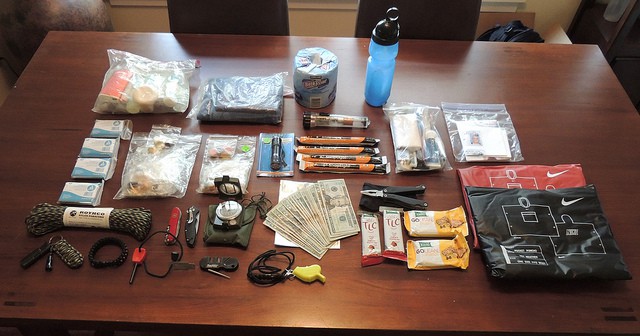 This Bug Out Bag was made by the good people over at Backdoor Survival. I want to point out that this is the only Bug Out Bag here which includes COPIES OF IMPORTANT DOCUMENTS.

As I talk about in this post about emergency binders, it is really important that you have copies of documents like your ID, passport, health insurance, etc. in case they are needed by rescue workers.  Not every disaster is going to bring about TEOTWAWKI, so you’ll want these for semi-SHTF scenarios!

They also included some other really practical items – like TOILET PAPER.  It isn’t absolutely necessary and it does take up a lot of space, but you’ll probably be happy to have some TP around when SHTF. See toilet paper alternatives and toilet paper tablets.

Note that Bug Out Bags are supposed to be the minimum supplies you need for survival immediately after disaster strikes.  So, a knife sharpener isn’t exactly necessary.  It is small and lightweight though, so why not bring it along?

I would have included a more durable flashlight, preferably a winding one in case the batteries go out.

Example 3: The Budget Bug Out Bag 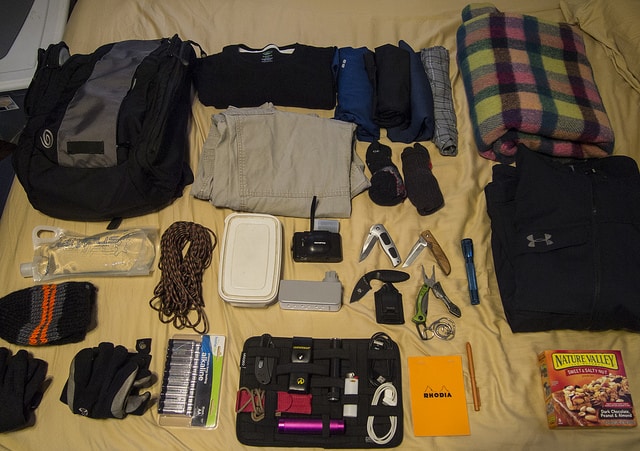 This is a pretty good example of how to build a Bug Out Bag on a budget.  There are some higher-quality items in this BOB (like the knives), but they are older and passed down.  While this Bug Out Bag is a pretty good start (more than the average person has!), there are quite a few flaws here.

Instead of including 4 knives in the kit (yes, there’s 4 knives here!), I would have opted for one really good quality survival knife with a fixed blade.  Fixed blades are much stronger than folding knives and a quality blade will allow you to do things like cutting wood.  Or, he could have packed 1 fixed blade and 1 folding knife. Read how to select a good survival knife.

I would have also opted for a wind-up flashlight instead of carrying around all those spare batteries.

And there should definitely be some sort of tarp or tent in this Bug Out Bag.  A wool blanket isn’t going to do much good when you don’t have a roof over your head! 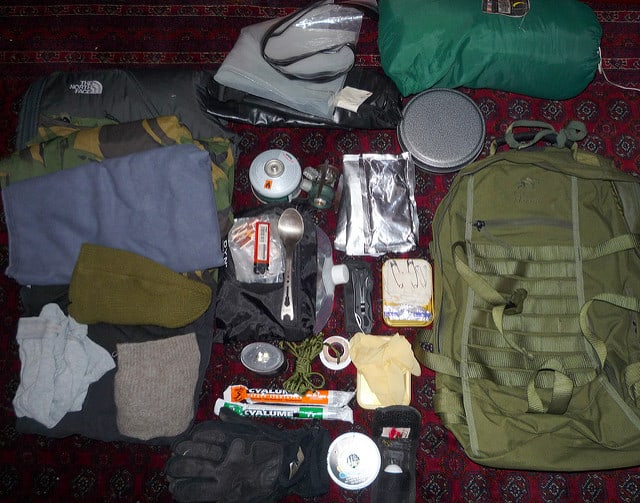 This is a SECONDARY Bug Out Bag – meaning it contains the gear which isn’t used as often so the main Bug Out Bag can be free.

There are some nice additional items here – like the zinc oxide tape, and mini fishing kit.

The addition of gloves is really nice too, especially for urban survival situations where you might have a lot of broken glass or rubble to deal with.

How does your Bug Out Bag compare to these ones?