I’ve seen a lot of those DIY survival candle tutorials on the web, they make it seem so easy to make candles!

As a homesteader, I’m ashamed to say that I actually bought my stockpile of emergency candles.  I’ve got about twenty 115-hour candles as well as lots of headlamps, flashlights, and emergency lanterns running on rechargeable batteries and crank-power.

So, there was never any need to make my own candles until recently.  My friend is getting married and she asked me for help making 85 candles for her budget rustic wedding.  I was happy to help and the candles turned out great…even with a few hiccups! 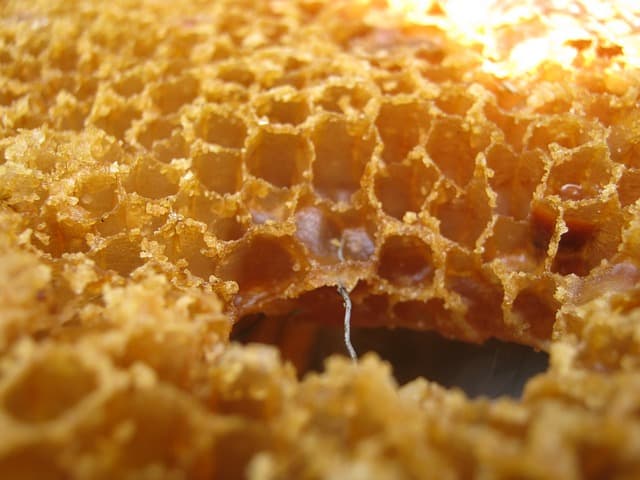 Candles use wax as fuel. As the National Candle Association explains,

“When you light a candle, the heat of the flame melts the wax near the wick. This liquid wax is then drawn up the wick by capillary action. Vapor from the melted wax combines with oxygen, which ignites at the wick and forms a constant flame.”​

For making candles, you basically have two choices for wax:

Beeswax vs. Paraffin for Candle Making

Almost all serious candle-makers will say that they like beeswax better than petroleum-based paraffin for their candles.  However, don’t dismiss paraffin either.

In this DIY project, I was able to test both beeswax and paraffin (my bee-farmer friend gave me some wax and the paraffin I bought for cheap online).  The paraffin actually ended up being easier to work with.Beeswax Benefits:

There is also soy-based wax available.  It has a lot of the same characteristics of paraffin, but burns cleaner and a bit longer. 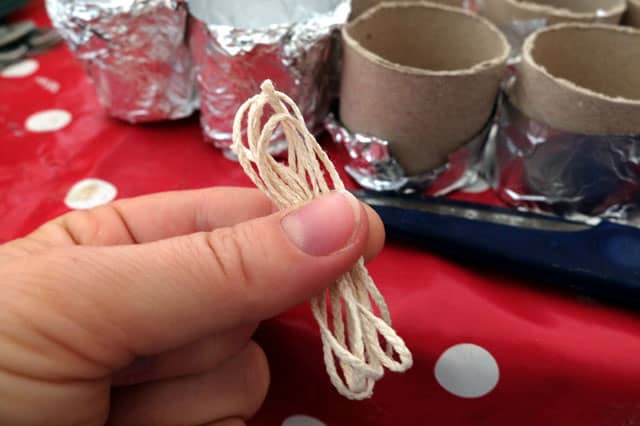 I didn’t realize how important the wick was until my test candles wouldn’t burn.   My wick material was good – it just wasn’t large enough for my beeswax candles.

I got some string (Amazon Link) which is made especially for candle making. The best candle wicks will be braided into a round shape.  The round braid helps the wick stand up straight and burn slower.

Unfortunately, the wick I got was a flat braid and thus not as thick. It burned very quickly and I had problems with the beeswax candles not burning fast enough.

In an emergency situation, you could a variety of things as an improvised candle wick.

This is VERY IMPORTANT.  If you get a wick which is too-small for your candle or wax type, it won’t be able to burn up the wax at the same rate it melts.  The result? You’ll get a puddle of wax which drowns out the flame.

If the wick is too large, then you’ll end up with a giant flame that produces a lot of soot.  The wax will liquefy into a deep burn pool.  With pillar candles, this causes the walls to collapse on themselves.

There are numerous types of candles.  They are each made slightly differently and have their pros/cons to consider.

Because this was for a wedding (with a lot of intoxicated people), I ruled out taper candles.  They would be too easy to knock over and cause a fire.  Likewise, I would never use taper candles during a natural disaster, or if there are small children or pets who might knock them over.

The safest choices were ones enclosed in glass jars.  Our budget didn’t allow us to fill up large mason jars with wax.  So, I made DIY candle molds to make small pillar candles. 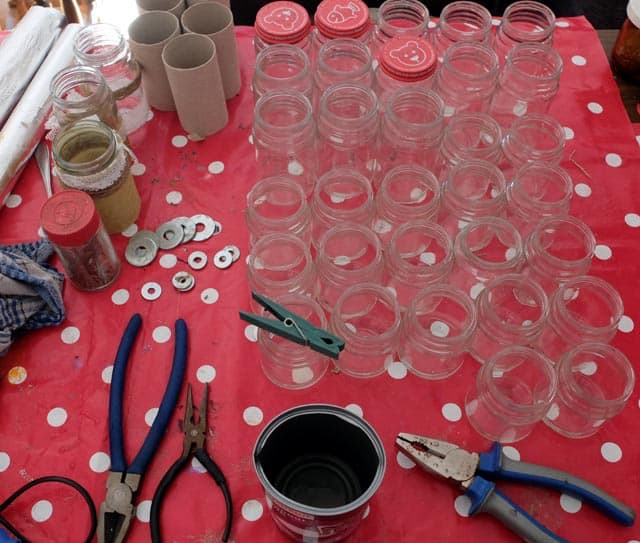 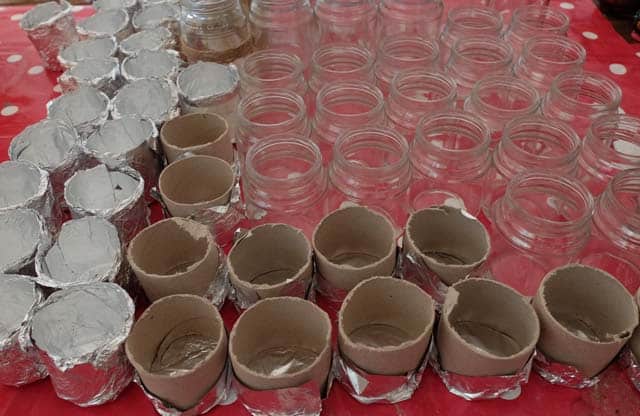 The tinfoil molds were easy to make by closing the foil over a small jar.  The molds ended up quite lopsided.  Quickly these were for a “rustic” wedding so perfection wasn’t a priority!

Making a candle mold by wrapping tinfoil over a jar

***If you are making votive candles you won’t need a mold.  The jar serves as the mold.

Ideally, you should prepare your wicks by:

I skipped this step and my paraffin candles turned out fine.  However, my beeswax candles suffered problems.

If the wick isn’t prepared, it will burn a lot faster.  Since beeswax has a higher melting temperature, the wick burned down before it could vaporize the wax, thus causing the wick to go out.

The lesson? Always prep the wick when using beeswax!

The longer wick made it easier to clip in place for pouring.  Wick string (Amazon Link) is cheap, so I didn’t mind wasting a bit to make this project easier.

If you don’t anchor your wick to the bottom of the mold, the wick will start floating around in the wax as you pour.

Just tie the wick to something heavy and non-flammable.  I raided my tool box for items, such as bolts and screws to use.  In my opinion, there’s no reason to buy candle anchors like these below but they are an option if you want to save some time. 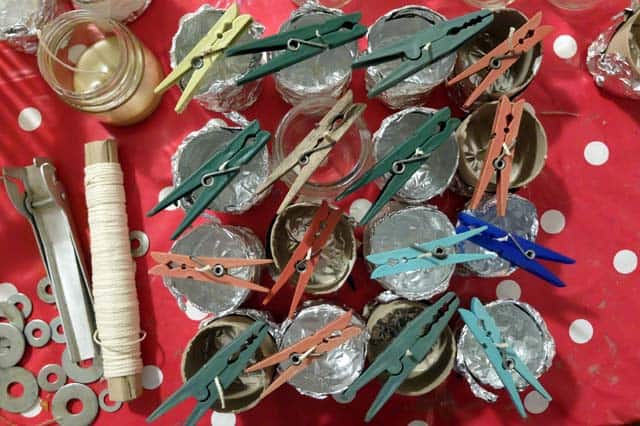 You can buy special candle wick holders, (Amazon Link) but you can also get by with DIY items.  I used clothespins to hold the candle wicks in place above the mold.

Note that whatever you use to clip the wick will end up covered with wax.  I’ve got a bunch of wax-coated clothespins to deal with now!

Paraffin wax has an ignition point starting at 390 degrees F.  During a sculpture class in college, a pot of melted wax I was using caught on fire.  The incident traumatized me and I was extra cautious to make sure my wax wouldn’t catch fire!

Use a double boiler: The safest way to melt wax is with a double boiler.  Simply boil some water in a pot larger than your wax pot.  The wax pot goes on top of this.  Steam from the boiled water melts the wax at a consistent temperature.

If your wax does catch fire, DO NOT PUT OUT WAX FIRES WITH WATER. The water will accelerate the fire and can cause an explosion.   Instead: 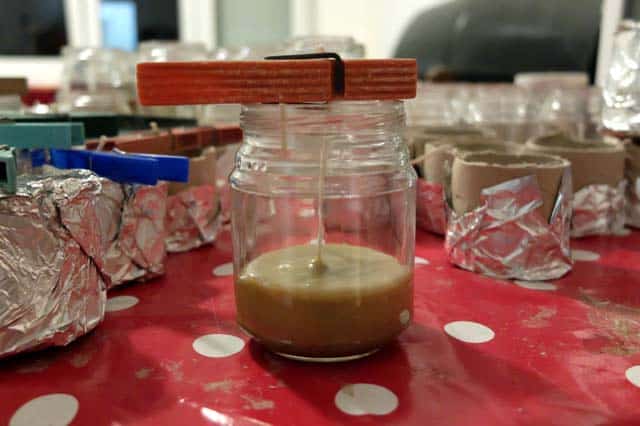 No brain surgery here.  Just pour the wax.  I prepared the space with plastic tablecloth material, so I wasn’t worried about any spilling.

Side note: You can buy tablecloth material by the yard in fabric stores.  It is cheap and is great for projects like this!

8. Removing Candles from the Mold 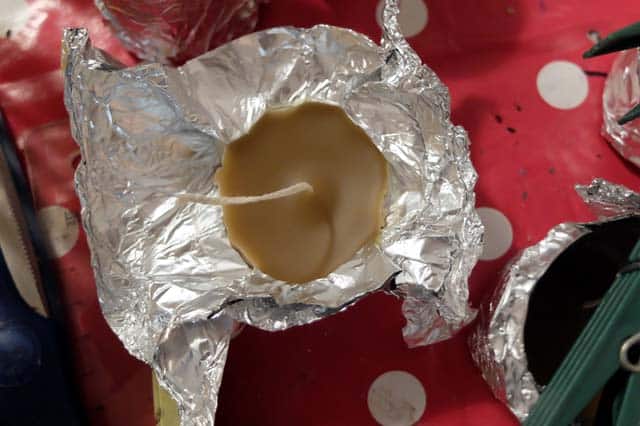 If you are making votive candles, then your work is done.  If you made molds, you’ve got to remove the molds.

Contrary to what all those DIY candle mold tutorials showed, getting the mold off was NOT easy.

Bits of cardboard stuck to the wax.  I was a bit lazy about cleaning it off the cardboard and it caught on fire during my test.  After that, I was diligent about using a knife to scrape off any remaining bits of cardboard.  It took forever.

As for the tinfoil molds, those were even worse. Tiny pieces of foil got stuck in the candles.  Next time, I’ll make the molds more carefully.  The smoother the edges, the less foil got stuck.

There seemed to be a perfect window of time for removing the candles from the mold.  If I let them sit until the wax completely cooled, the cardboard or foil was stuck.  It was a lot easier when the candles were still slightly soft.

There you have it – how to make your own emergency candles.  Let me know if you have any tips about making your own candles!