Does Distilled Water Go Bad? (and Some Storage Options)

Distilled water is the purest water in the world, so theoretically should last longer than ordinary bottled water.

It’s made by boiling water, collecting the steam, and returning it to a liquid state. This process removes all the chemicals, toxins, and other contaminants, making the water purer and safer to drink. This process also extends the shelf life of the water.

Most people use distilled water in their household appliances, humidifiers, and CPAP machines. It’s also used in car batteries. Although distilled water is safe to drink, it is so pure that it tends to taste rather bland.

Experts warn against drinking distilled water for extended periods, saying it lacks the essential minerals your body needs. The absence of minerals such as magnesium, calcium, and sodium can disrupt the body’s metabolism and cause electrolyte imbalances.

How Long Does Distilled Water Last?

Unlike bottled water, distilled water usually comes with a best-before date but should be good for years after that date.

Stored correctly, distilled water lasts almost indefinitely. Unopened, it has a shelf life of up to five years, compared to ordinary bottled water, which lasts only two.

Distilled water doesn’t spoil or go bad, but it is susceptible to contamination. The packaging process can affect the purity of the water, as can various environmental factors, including pollutants in the air.

Water stored in a plastic container won’t last as long as distilled water in a sealed glass bottle. Plastic is perishable, so will, over time, seep chemicals into the water, rapidly reducing its quality.

The instant you open a bottle of distilled water, you expose it to the air. As dissolved salts and other inorganic chemicals enter the water, its conductivity increases. The higher the conductivity, the less pure the water.

Although exposing distilled water to the air makes it more susceptible to contamination, it will still remain purer than normal mineral water simply because it started out purer in the first place.

Nevertheless, drinking or using contaminated distilled water can cause problems.

Is Expired Distilled Water Safe to Use?

Distilled water is commonly used in CPAP machines and humidifiers. Even expired distilled water will work effectively in both those appliances, as long as there are no signs of contamination.

A humidifier filled with moldy water won’t do your lungs much good, while using contaminated water in a CPAP machine “has the potential to cause respiratory illness.”

If you drink water that contains bacteria and other contaminants, you’ll soon know about it. It only takes about 24 to 48 hours for the first symptoms to develop. These usually include abdominal cramps, diarrhea, nausea, and vomiting. If you drink moldy water, you may also experience respiratory problems.

The best way to avoid drinking contaminated distilled water is to smell it before you taste it. Also, check for particles or signs of mold. If your distilled water has a strange smell or taste to it, discard it immediately.

According to the EPA,

“exposure to high doses of chemicals can lead to skin discoloration or more severe problems such as nervous system or organ damage.”

How to Extend the Lifespan of Distilled Water

#1 The Pros and Cons of Direct Sunlight

Sunlight and heat quickly compromise the integrity of plastic bottles and other forms of packaging.

According to Rolf Halden, the director of the Center for Environmental Health Engineering at Arizona State University’s Biodesign Institute,

“The hotter it gets, the more the stuff in plastic can move into food or drinking water.”

If you store distilled water in glass bottles, however, it could benefit from being exposed to the sun.

“detoxify and decontaminate water infected with bacteria and viruses.” 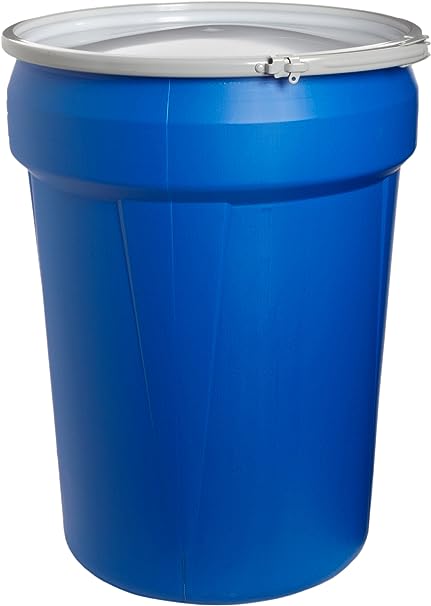 Plastic water bottles deteriorate quickly, contaminating the water inside. It is primarily because the plastic bottle that bottled distilled water carries a best-before date. It’s not the water that goes bad, but the plastic.

Storing your distilled water in glass bottles can extend its lifespan considerably as glass doesn’t disintegrate like plastic, so won’t contaminate the water with chemicals.

Store larger quantities of distilled water in high-density, food-grade quality polyethylene (HDPE) drums or tanks. These containers keep the water and protect it against light exposure.

#3 Store Away from Chemicals and other Contaminants

As with ordinary bottled water, distilled water can become contaminated by airborne particles.

If you store distilled water close to a strong-smelling substance like paint or gasoline, it may taint the flavor. While this won’t necessarily make the water unsafe to drink, it will give it a strange, potentially unpleasant taste.

As soon as you expose distilled water to air, it becomes susceptible to contamination. Although distilled water is lacking in nutrients, some bacteria and germs can grow in it, making it unsafe for human consumption.

It may still be safe to use in a CPAP machine, but only if there are no signs of possible contamination.

Once you’ve opened a bottle of water, you’ve exposed the contents to the air, allowing airborne contaminants to enter. Refrigerating that bottle will prevent that bacteria from growing, keeping your water fresher for longer.

Distilled water lasts longer than normal bottled water (see does bottled water go bad) because it is purer. Because it’s purer, however, it also lacks the minerals we humans need.

Drinking distilled water is safe, but it could lead to health concerns further down the line. Nevertheless, if distilled water is all you have on hand when disaster strikes, keeping it as fresh as possible could be crucial for your survival.