Spyderco vs Benchmade: Battle of the Blades 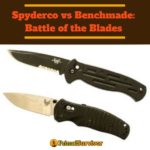 In the world of knives, Spyderco and Benchmade are familiar to knife connoisseurs, recognized for their fine grade of craftsmanship and the variety of tools they offer.

But is one of the two a cut above the other, or are they evenly matched in quality?

Read our comparison below to see if one of these companies cuts too many corners.

Okay, enough with the knife puns. Let’s cut to the chase.

Both knife companies originated in the United States and maintain their home offices domestically.

Spyderco was founded in 1978 in Colorado and is currently based in Golden, CO.

The founder and current president Sal Glesser started a small company selling what he called “The Portable Hand”, a specialized tool for jewelers and metalworkers. After the company began to gain a following he introduced a line of knife sharpeners and folding pocket knives.

Spyderco is significant because of its first-ever designs in the world of knives like the pocket clip and ambidextrous, trademark hole-in-the-blade to allow easy opening.

They have 83 employees and are partnered with charities supporting research and relief in Parkinsons and alzheimers, among other charitable efforts.

Benchmade originated in 1981 as the company “Bali Song”, and they are currently headquartered in Oregon City, Oregon.

Founder and CEO Les De Asis was frustrated with the cheap, poor-quality butterfly knives he encountered in his youth and put his metalshop skills to work. He developed a superior quality knife and eventually found his company evolving into Benchmade.

Les chose “Benchmade” as the company moniker to emphasize the personal effects that go into their knives as a bench made tool.

Benchmade is a world leader in automatic knife technology and they support multiple charities and organizations geared towards the outdoors. The company employs 380 people.

Where Are The Knives Made?

Spyderco: Creates knives in the USA but outsources a portion of their work overseas in countries like Japan, Italy, Taiwan, and China. They also own several smaller companies that offer more affordable knives such as Byrd Knives.

Benchmade: Crafts 90% of their knives in the United States, the remaining 10% are their more affordable models and are made overseas.

Spyderco offers a lifetime warranty on their knives and offers a multitude of services for the blade including free sharpening and affordable repairs.

They will replace knives that are defective regarding manufacture, materials, or workmanship with an identical or similar model. All other repairs have affordable costs and Spyderco will provide a free estimate of repairs.

Benchmade has an identical warranty regarding defects. This warranty only applies to genuine Benchmade knives purchased from authorized Benchmade dealers.

Benchmade offers a free sharpening service and they will also oil and clean your knife for free! On top of this they also provide a lasermarking service at an affordable price.

Spyderco is renowned for its industry-first advancements like the pocket clip and ambidextrous opening style.

Its iconic round thumb hole is known as the “Spyderhole” and makes opening the blade easy… but not quite as easy as a simple stud like other folding knives have.

That’s my own opinion there, and even though studs can get snagged and stuck on things, they’re just easier than the “Spyderhole”.

Spyderco has excellent folding knives and those are my preferred Spyderco blades. While the company has many builds and types of knives available, their folding knives are my favorite product they produce.

A friend carried the same fully serrated blade for nine years before losing it in a lake, and you can bet your butt he went right out and picked up the same model immediately.

Benchmade use very high quality steel in their knives and has a litany of designs available. While they have various styles and designs to choose from, they all tend to have the same straightforward design whereas Spyderco has more “unique” models available.

I’m a fan of less flash, so I tend to prefer Benchmade designs over Spyderco.

This functional feel in the hand gets my vote, and their iconic butterfly logo is simply nicer to my sensibilities than the Spyderco logo. Benchmade also offers laser engraving allowing for unique customization and perfect gifting opportunities.

Spyderco is in my opinion the superior quality knife. The company uses exacting requirements for their production lines, and the few anecdotal cases of a bad Spyderco knife are few and far between.

Besides that, while they have different models of knives and different types of production runs, the company really only has “Spyderco knives”.

Benchmade, on the other hand, has three grades of production: the gold series (top of the line), the blue series (standard class of knive), and the Black series (generally reserved for emergency personnel, military, and law enforcement, with limited civilian availability).

It’s a nice way of delineating the general quality of the knife you’re getting and helps fit things into convenient price points.

But between the two, Spyderco doesn’t need different categories for its knives, and that demonstrates a firmer and more general commitment to quality.

Spyderco will almost always be the more affordable option. Plain as that.

They have excellent quality in their craftsmanship and design, but they outsource much of their work overseas and that simply lowers the cost of their knives. You can expect to get your hands on one of their better knives for around a hundred US dollars.

Benchmade is crafted mostly in the US, and you can see that in their price. Their best knives are well over one hundred US dollars, most of that cost going towards the higher wages and production required for a domestically manufactured knife.

Between the two I like… well, I like them about the same. It’s six of one or half a dozen of the other when it comes to their quality and craftsmanship, each evenly matched. I tend to favor American-made tools and goods, and Benchmade makes more American knives than Spyderco.

If I had to make a recommendation, I’d suggest the Spyderco C11SBK Delica Lockback knife. (Amazon Link). It’s the one my buddy uses and swears by, and it’s gotten him through years of landscaping projects. I’ve used it during various projects and know by those few brief experiences that it handles exceptionally well.

The fully serrated blade hasn’t given him any trouble and maintains a ridiculously sharp edge after tearing through burlap, being ground against stone, and cutting yards of rope.

For the Benchmade I’d suggest the 940 EDC. (Amazon Link). It’s… it’s awesome. A friend purchased one after much research and selected this model. He’s had it for almost a year and I’m pretty sure it hasn’t left his side. I saw him shaving with it once.

Just kidding. But he loves it, and I love it too!