The 9 Water Purification Methods (For Emergencies and Disasters)

There is a LOT of information about water purification systems, and a lot of the info is purposely misleading because companies want you to buy their products.

The reality is that there is no one “best” method of purifying water in disaster situations.

Which water purification method to use depends on your situation and the threats present.

For example, a water treatment system designed for backcountry use where viruses aren’t likely probably won’t be safe for treating floodwater in an urban environment.

Here is an overview of the 9 methods of disaster water purification and the pros/cons of each.

Boiling is a good way to treat water in most common disaster situations, such as grid outages when the water treatment center stops working.

Most sources (including FEMA and the Red Cross) say that you need to boil water for 1 minute to kill bacteria, viruses, parasites, etc.

The term “chemical” water treatment is a bit confusing, but these are some of the most common methods for treating contaminated water.

For example, you can buy water treatment tablets or drops to put in unsafe water to kill bacteria, parasites, and viruses.

The main downside of water treatment tablets is that they are limited in quantity. Where some water filters can be used for thousands of gallons, one tablet will usually only treat one liter of water.

Probably the most common chemical treatment for water is chlorine bleach.

Make sure it is unscented bleach with no added cleaners. It should say 8.25% sodium hypochlorite on the label.

To treat water with bleach, you’ll need to add 6 drops per gallon of water and let it sit for 30 minutes.

Water filters are considered a type of “mechanical” water treatment because they trap contaminants that go through them.

There is a lot of variability in water filters, so you need to be careful when choosing one. The most important thing to look at is the micron size rating. This refers to the size of contaminants that the filter can remove.

The smaller the number, the better the filter will remove contaminants.

I suggest you read our reviews of some of the best survival water filters here for more information.

Note that viruses are incredibly tiny, so most mechanical filters will not remove them.

This unique property makes activated carbon the only water treatment method which will remove organic chemicals such as benzene and pesticides.

I think that every person should have some activated carbon (Amazon Link) in their disaster supplies. However, it is vital for anyone living near industrial plants or agricultural areas.

While the activated carbon won’t kill bacteria, parasites, or viruses, it can be combined with boiling to make very-contaminated water safe for consumption.

For example, let’s say that there has been a terrible hurricane and you don’t have any bottled water left. You could boil the flood water (which would kill viruses, bacteria, and protozoa/parasites) and then use activated carbon to remove the many toxic chemicals in the water.

You can even make your own activated carbon in a pinch.

One important thing to note about activated carbon is its saturation level. At a certain point, it won’t be able to absorb any more impurities.

If you continue using the carbon filter after its saturation point, all those absorbed impurities will leach into the water. Unfortunately, it is tough to gauge when that saturation point has been reached.

The dirtier the water, the faster the carbon will become saturated.

Suitable for: Removing chemicals from toxic water (such as in floodwater, near industrial sites, or biochemical attacks), nuclear disasters.

Ultraviolet light causes the DNA in bacteria, viruses, and parasites/protozoa to scramble. They will still be in the water, but they will be harmless.

You can buy UV water treatment wands. To use them, you put the wand in the dirty water, push a button, and let the UV light do its work.

These methods are great because they are portable and kill viruses (which filtering does not do).

Some sources say that UV treatment methods’ effects are only temporary because the DNA can become unscrambled. So, you should consume the treated water right away instead of waiting hours after treatment.

UV water treatment systems also rely on batteries, which could be a problem in specific disaster scenarios.

Reverse osmosis systems are very complex and somewhat expensive. They work by hooking up to your water system and forcing pressurized water through a special membrane.

When it comes to treating water, reverse osmosis is one of the most effective single methods. The only impurities the system won’t remove are organic chemicals (such as fluoride, chlorine, and lead).

However, because reverse osmosis systems are so costly, it is unlikely that anyone will want to rely on this method for emergency preparedness.

It is worth mentioning that reverse osmosis is the only method that will remove significant amounts of radioactive materials.

If you live near a nuclear facility, it might be worth the investment to get one of these systems. 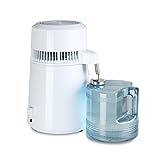 Most home water distillers work by boiling water and then collecting the steam. The steam is channeled into a separate container where the vapor cools and turns back into water. The idea behind distillation is that microorganisms and pollutants are left behind.

However, some organic chemicals like pesticides and VOCs readily convert to vapor, so a distiller won’t remove these. However, most home distillation systems have special pre-filters to eliminate these threats.

You can have a look at a system on Amazon here.

Without getting too technical, ion exchange water treatment systems rely on porous polymer beads. When water hits the surface of the beads, it causes a release of ions.

The result is that “bad” ions are exchanged for “good” ions.

Ion exchange systems don’t really purify water since they only remove heavy metals and some organic chemicals. Thus, they are considered water softeners.

But, if you are worried about arsenic, lead, mercury, or other toxic heavy metals in your drinking water, an ion exchange system would be good.

Suitable for: Situations where heavy metals might be present in the water, such as water systems fed by old lead pipes (think of the crises in Flint, MI, and Corpus Christi, TX).</em

Rainwater catchment is a form of distillation since the sun evaporates the water into vapor, and then when it collects and cools in the sky, it comes back in the form of rain.

However, you don’t get a pre-filter with rain, so it could contain lots of organic chemicals (acid rain, anyone?).

You’ll also have to be careful about how you catch and store your rainwater, so bacteria and mold don’t start to grow!

If you have no other way to treat water, though, in an emergency, rainwater is one of the cleanest, safest options (barring nuclear emergencies and chemical attacks).

Which Water Purification Method to Choose?

With so many water treatment methods, figuring out which one to use can be confusing.

You will need more than one method to make your water safe – and even that might not help you in certain crises such as biochemical attacks.

Here is an overview of what treatment methods you could use depending on the situation:

Click the image to have a copy sent to your inbox.​ 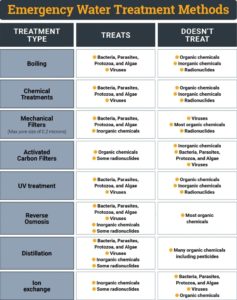 Hopefully it will never come to this because you’ve got enough long-term emergency water stored to get you through a disaster, but you can never be too prepared!