Having a Bug Out Bag is crucial for disaster planning.  However, you can’t rely on the BOB alone.  Thus, it is important to also have a survival cache – a well-hidden stockpile of survival supplies that you can access during a crisis.

Why You Need a Survival Cache

As I’ve talked about before, your Bug Out Bag could be stolen.

There are also situations where you might not be able to get to your BOB.

For example, if an earthquake hits while you are driving, you might not be able to get to the BOB in your trunk. Imagine how frustrating it would be to have your emergency supplies so close yet inaccessible!

Some people also suggest using a survival cache to keep the weight of your BOB down.

Nothing can be planned with 100% certainty, so it is best not to keep all your eggs in one basket.

A survival cache ensures that you always have a backup.

The contents of your cache will look a lot like your Bug Out Bag (see a BOB packing list here).  However, you might opt for cheaper gear than what’s in your BOB.

For example, I’m not going to bury my favorite survival knife which costs over $250.  Since it is smart to have multiple survival caches, the price of gear could start adding up quickly.

Don’t skimp too much on supplies for your survival cache though. A crappy knife is better than no knife, but I still want peace of mind that the gear could get me through a disaster.

This is your survival we are talking about!

Everyone’s cache will look different, but here are some ideas of what you will want to include:

Your survival cache is meant to be used if you can’t get to your Bug Out Bag, or the bag is stolen.  Likewise, you might need it if the supplies at your home or Bug Out Location are stolen.

With this in mind, the best places to hide it are:

DO NOT put your survival cache in: 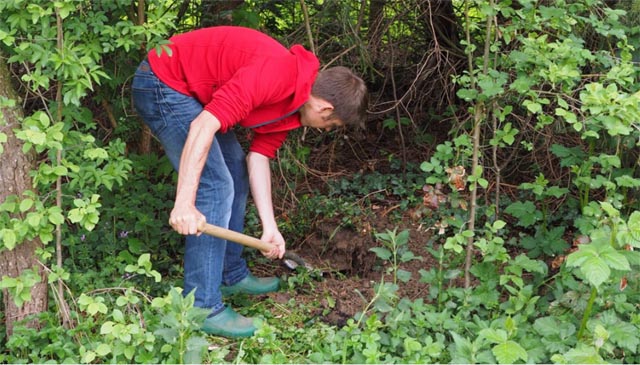 The benefits of putting your cache underground is that it will be harder for others to find.  If you stick to remote areas, it is unlikely that anyone will accidentally dig it up.

But there are some issues with burying  – primarily that the contents could get damaged by water.

To make sure your buried cache stays safe underground, follow these tips:

If your gear isn’t in the right container, the contents can quickly start to rust or deteriorate.

Simply put your container must be:

In my opinion, a PVC container is the best option (more on how to make one below).

When made correctly, the PVC cache is completely waterproof and animals won’t get into it.  Even if someone finds it, they probably will think it’s just an old pipe and won’t bother opening it.

Other container options include:

For a very large survival cache, you might want to put it in an oil drum like this guy:

Depending on what you want to cache, you might not even need a container.

This guy buried rifle just in a garbage bag surrounded by foam padding.

I wouldn’t risk burying a rifle this way, but his rifle was okay a year later.

How to Make a PVC Cache

As mentioned before, I think a PVC cache is the best container choice. It is waterproof (when sealed properly), won’t corrode, and animals won’t get in it.

Most importantly, the PVC cache is discreet.  Most people wouldn’t think twice if they stumbled across a piece of PVC buried somewhere.

This video shows how to make a PVC survival cache.

Your survival cache is meant to supplement your Bug Out Bag.

Make sure you’ve got a solid BOB packed and have an emergency plan in place.

Then you can take the step of laying out survival caches along your bug out route.

Do you have a survival cache? What’s in it?