20 Critical Pieces Of Urban Survival Gear You Forgot to Prep

Preppers spend a lot of time talking about what gear to put in their bug out bags. (see our bug out bag list) By comparison, we hardly ever talk about urban survival gear beyond the obvious like food, water, and emergency lighting.

The truth is that you should be just as prepared for urban survival (aka hunkering down) as you are for evacuation into the wilderness. In fact, there are a lot of situations when it makes more sense to hunker down:

Because of these harsh realities, we should really spend some more time thinking about urban survival gear for SHTF situations.

I’ve already got a useful Urban Survival Gear Checklist that you can use to prepare. But here I want to talk about the urban survival gear that most people forget.

No matter how much you prepare, you might have to scavenge when SHTF. A crowbar (Amazon link) makes it possible to get into locked and boarded-up abandoned buildings.

Not that I am encouraging looting – just saying that you should be prepared for anything!

Bolt cutters (Amazon link) are important for scavenging, but also in case you need to get access to chained-up places.

I’d especially make sure to have a pair of bolt cutters in your vehicle when evacuating in case you need to cut through chain roadblocks.

They would also be useful for cutting:

Whether it is a hurricane, tornado, mob riots, or another SHTF disaster, you can expect a lot of broken windows and doors.

You must have a way to board these up to keep out intruders as well as the elements.

A good rule of thumb is to get enough plywood and plastic sheeting for each window and door in your home.

If you are unsure of how to board up your home for emergency preparedness, there is a good guide here. Or watch the video below.

A lot of preppers have stoves for boiling water to treat it and possibly also a survival water filter. However, boiling and filtering will NOT remove chemical contaminants!

You will need activated charcoal (Amazon link) for this.

This should be one of the FIRST pieces of urban survival gear that you get. Yet, a lot of preppers just don’t want to think about the gross reality of having to crap into a bucket.

But if you don’t get this gear now, it will give a new meaning to SHTF! Learn how to make an emergency 2-bucket toilet here.

This should be self-explanatory.

Check the expiration dates on your current fire extinguishers  (Amazon link) to make sure they are still reliable.

September 11th taught us the importance of having a survival mask. Unfortunately, many people are still suffering and dying due to the terrorist attack because of all the toxic debris which was released into the air and caused diseases years after the fact.

Flashlights, rechargeable batteries, emergency radios, and phones are all important survival gear – but are useless if you can’t power them.

How do you plan on cleaning up all that broken glass and debris in your home without work gloves?

How about scavenging for supplies with your bare hands?

Better get several pairs of heavy-duty gloves to be prepared for urban survival!

My Bosnian friends have told me their survival stories. One thing that stood out is how during the Siege of Sarajevo they chopped down all of the trees in the parks for firewood.

They also would chop up any loose wood they could scavenge. A survival axe is also great if your crowbar won’t get you into a boarded-up place! 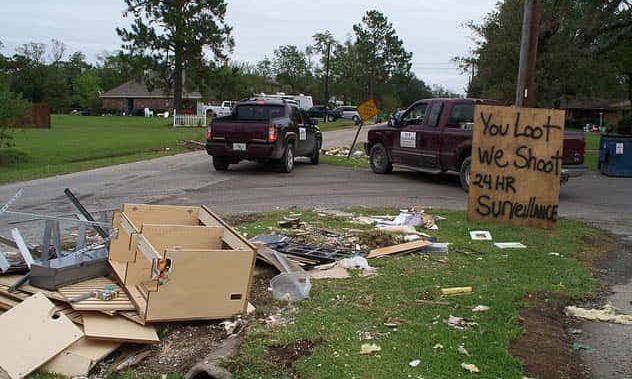 I know a lot of people are all about firearms for urban survival, but there are plenty of alternatives to guns which might make a lot more sense for certain situations.

Remember that you should only stock a firearm for self-defense if you actually planning on using it.

In a true SHTF situation, I’d do anything to protect my family. However, past disasters have shown us that rioters and looters can be as young as 9 years old!

I don’t know how I’d live with myself if I had to shoot a 9 year old.

So, I’ve made sure to stockpile lots of pepper spray with my urban survival gear too!

Most of us have gotten spoiled by having constant internet access. We have all the info and advice for survival at the tips of our fingers… Until the power goes out!

Make sure to have books or printouts of vital survival info, such as:

With the lights out and nothing to do, sex is one way to relieve the tension… But this is NOT a time you want to get pregnant!

Make sure to have lots of condoms in with your survival gear. You can also use them for bartering.

Keep an extra pair in your Bug Out Bag. If you can’t afford a third backup, just take the BOB pair out if you need them while hunkering down.

A shut-off wrench is used for this. You’ll also want shut off wrenches for your plumbing too.

This wrench works for both gas and water – check on Amazon

In addition to shut-off wrenches, you’ll need various tools to help you get through the urban disaster. For example, tin snips (Amazon link) are great for making an emergency stove out of a tin can. Hammer and nails are needed for boarding up windows.

Here are some of the basic tools you need for emergency preparedness:

If you live in a flood or hurricane zone, it is really worth it to buy an emergency raft and paddles. (Amazon link)

Even if the water isn’t coming to the second floor of your home, it is still better to use the raft if you have to leave the home than wading through hazardous sewage water.

Are your survival supplies in the basement?

Will you ever have to leave your home – such as to dispose of waste?

These are just two reasons you’ll need waterproof waders (Amazon link) so you don’t have to go through the filthy water during flooding!

In addition to a Bug Out Bag, you need a “Get Home Bag” with all the survival gear necessary to get you home should an emergency happen while you are out.

In an urban survival disaster, buckets are used for toilets, collecting debris and trash, storing food, seats, keeping supplies dry… You can really never have too many buckets! (Amazon link)

Just make sure to get the waterproof lids and a bucket opener (Amazon link) is great to have too.

What else would you add to the list of forgotten urban survival gear?